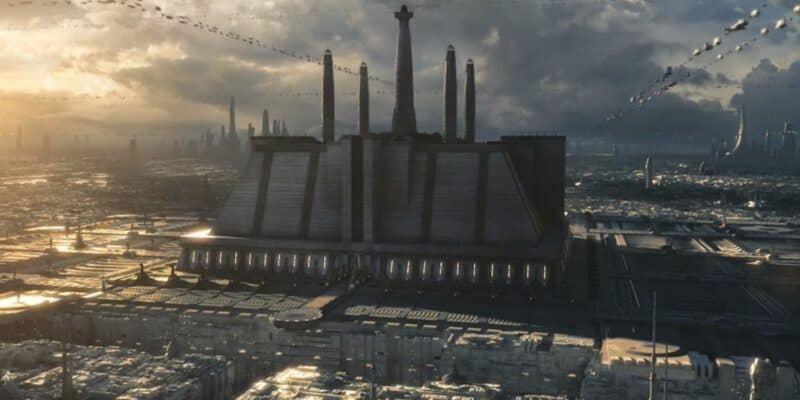 Recent concept art for Star Wars: The Rise of Skywalker reveals a different version of Rey (Daisy Ridley) standing in a destroyed Coruscant.

Star Wars: Episode IX – The Rise of Skywalker (2019) officially ended the Skywalker saga in the Star Wars universe with some controversial plotlines that not every Star Wars fan enjoyed — the death of Han Solo (Harrison Ford) and Luke Skywalker (Mark Hamill) in particular.

Star Wars fans will remember the prequel trilogy planet Coruscant meeting its demise in Star Wars: Episode VII – The Force Awakens (2015) when the First Order’s Starkiller base pulls a Death Star move and destroys the planet like Alderaan.

Fans felt that much of the sequel trilogy was a repeat of the original trilogy. Still, recent concept art from artist Adam Brockbank reveals Lucasfilm had different intentions for Coruscant:

Another ‘Dark Rey’ with more than a touch of the Galadriel’s, on an ash strewn Coruscant.

Fans met “Dark Rey,” Dasiy Ridley’s Rey character falling to the Dark Side, in The Rise of Skywalker as the Jedi rummaged through a destroyed Death Star II looking for a Sith Holocron.

The shocking scene showed a glimpse of what Rey could be, in she succumbed to Kylo Ren (Adam Driver) and Emperor Palpatine’s (Ian McDiarmid).

Rey resists the temptation and ultimately defeats the Sith, but Brockbank’s concept art shows that fans almost got to return to Coruscant as Rey struggles with the Dark Side.

The Rise of Skywalker took the audience to numerous planets — many of which felt familiar to existing Star Wars planets — but none would have held a candle to Coruscant.

Considering that the planet of Coruscant was destroyed in The Force Awakens, this Force Vision of a redeemed Rey in white clothing would have been a non-existent Coruscant with falling ash. Still, that would have been insanely refreshing for the sequel trilogy.

Brockbank’s work — which also includes concept art for the Harry Potter series — shows a The Lord of the Rings-like Galadriel interpretation of Rey.

Donning white clothing amongst the falling ash, Rey seems to have resisted the Dark Side’s temptation and been awakened to new truths about the Force, herself, and the Star Wars galaxy.

The Clone Wars and Star Wars prequels heavily feature Coruscant, and Lucasfilm perfectly gave fans more of the planet in the final season of The Clone Wars.

Adam Brockbank’s concept of art gives fans a fantasy of what could have been in recent Star Wars films and hope for the future.

Showrunner Jon Favreau’s The Mandalorian, Dave Filoni’s The Bad Batch, and The Book of Boba Fett are all helping expand the Star Wars galaxy. With other streaming series like Ahsoka, Andor, and Visions, fans will see a lot more of the galaxy than ever before.

Would you have liked to see Coruscant in the sequel trilogy? Let us know in the comments below!