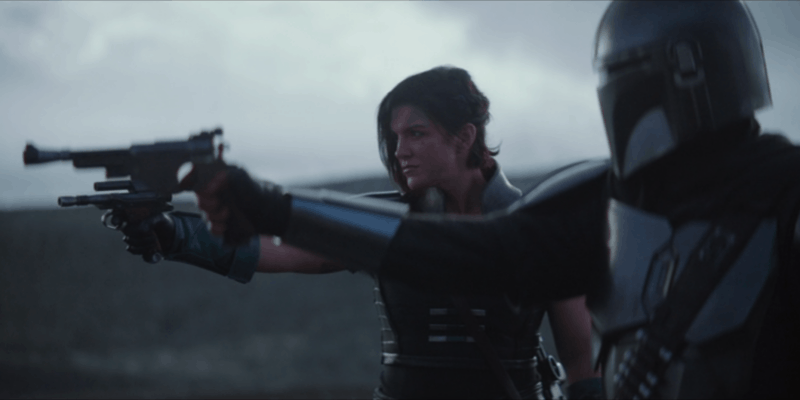 The Gina Carano firing from The Mandalorian is perhaps one of the most publicly divisive actions The Walt Disney Company and Lucasfilm have taken ever since the latter’s acquisition by Disney in 2012.

Carano was fired from her role as Cara Dune in The Mandalorian after the actress and former MMA fighter shared controversial political opinions on social media. Now, over six months later, one Mandalorian star is speaking out on the polarizing Carano firing.

Carano first debuted in Star Wars in Jon Favreau’s hugely popular The Mandalorian. Joining a cast made up of actors like Pedro Pascal (Din Djarin), Carl Weathers (Greef Karga), and Giancarlo Esposito (Moff Gideon), Carano’s Cara Dune helped issue in a new wave of characters for Lucasfilm. And we must not forget the pop culture icon, and universally adorable, “Baby Yoda” AKA Grogu.

Oh, and, of course, Mark Hamill’s Luke Skywalker made that sensational cameo in the Season 2 finale, defeating the Dark Trooper squad and taking Grogu to begin his Jedi training following his own training in the original trilogy. However, recently, Luke’s appearance in The Mandalorian Season 2 finale has come under scrutiny when it was revealed that the placeholder for Hamill’s role was another fan-favorite Jedi Knight.

During the height of the Carano controversy, Star Wars fans saw polarizing trends both in support of Carano and against the actress’ actions. #IStandWithGinaCarano, #WeLoveCaraDune, and #FireGinaCarano all fired up around the time of Carano’s firing. It was here, too, that fans called out actions, or lack thereof, against showrunner Jon Favreau and Carano’s co-star and leading man Mando himself, Pedro Pascal.

In the time that has passed since her firing, Carano has been seen on Running Wild With Bear Grylls in her only primetime television appearance since her Mandalorian firing, leading to #GinaGoneWild to trend for hours on social media. The actress also recently announced the details of her first official project since Star Wars — a currently untitled action-thriller made with The Daily Wire’s Ben Shapiro. Shapiro has been a fervent supporter of Carano’s and a vocal figure who has frequently denounced Disney’s firing of her.

Now, a Mandalorian star has approached the subject, speaking out on Carano and her subsequent firing.

Has anyone from The Mandalorian spoken about Carano’s firing?

In a recent discussion at Dragon Con in Atlanta, Emily Swallow, who played the Armorer in The Mandalorian Season 1, had this to say on the controversial Carano firing. Via The Direct:

Swallow confirms she was not privy to the situation behind the scenes. In fact, even Carano herself has said she found out about her firing on social media.

“I know so little about what happened. I experienced it like you did. I don’t know anything about the inner workings of it. I can only speak about Gina being a lovely person, which she is.”

The Mandalorian actress expands on the broader situation, such as “cancel culture”, which led to Carano’s firing from Star Wars.

“I am thoroughly baffled by a lot of what we’re dealing with right now with cancel culture and I think that it’s… oh man. There’s so many layers to it that are important to look at, but I think that the hatred that comes into it and when people start refusing to listen to the other side, no matter which side they’re on, I think that that’s really dangerous. One of the things that is so beautiful about our country is we have free speech. We can hear things that we don’t like, and we can disagree, and that’s fine.”

The now halted Rangers of the New Republic seemed to hint at the character of Cara Dune’s bigger story, but Lucasfilm has confirmed this is “no longer in active development”.

The Mandalorian Season 3 is expected sometime in the near future, although various reports have suggested that filming has only just begun, meaning it is possible the third outing for Din Djarin and friends might not air next year.

That being said, the Mandalorian universe will be getting a new addition this year when The Book of Boba Fett debuts in December, and after that momentous arrival into live-action, Ahsoka Tano’s series, Ahsoka, is sure to be coming to the galaxy far, far away soon. It’s safe to say that The Mandalorian is now a key part of Star Wars history.

Have you been following the Gina Carano situation this year?