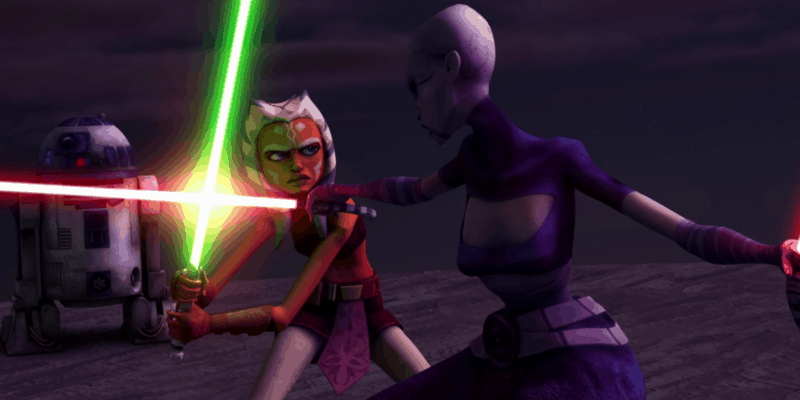 Ventress, who was later voiced by Nika Futterman in George Lucas and Dave Filoni’s Star Wars: The Clone Wars series, a trained Jedi Knight, but ultimately turned to the dark side and became Count Dooku’s secret Sith apprentice.

She was known as an assassin and a Separatist General. Following Dooku’s betrayal, Ventress turned her back on the Separatist movement and became a prolific bounty hunter alongside the likes of Star Wars icons like Boba Fett.

Recently, it emerged that Ventress almost returned to battle Kylo Ren in the Star Wars Resistance series, but the plotline was ultimately scrapped.

Now, Grey Griffin has spoken out about her desire to return to the Asajj Ventress role in a new interview:

“I would adore that [coming back to the Star Wars franchise as Ventress]. I am happy with the Asajj I got to play, though, just because I’m such a fan of Genndy Tartakovsky. That’s my favorite Star Wars property. I don’t know, maybe I’m just partial to it because I was in it, but I just thought it was so beautiful. The original Clone Wars he did for Cartoon Network was so graphic and beautiful.

Anyway, I am pleased with my Asajj, but I also get to be part of the Star Wars world all the time. I do Maz Kanata and I play all sorts of different things in that universe and always have a toe dipped into it. I’m in The Bad Batch as a few different little things, but they always throw me a bone here or there for which I’m grateful. My Asajj was in my favorite Star Wars property ever, so I’m glad about that. I’m open to more!”

Although Ventress ultimately died saving her lover Jedi Master Quinlan Vos in the 2015 Star Wars canon novel Star Wars: Dark Disciple — the story was an unproduced Clone Wars arc — there is still room for the fan-favorite character to return in the ever-expanding Star Wars universe.

The upcoming second season of Filoni’s Clone Wars spinoff, animated series Star Wars: The Bad Batch, for example, is set in a post-Order 66 Star Wars galaxy, between the end of the prequel trilogy era and the start of the original trilogy.

Furthermore, Ventress’s relationships with both Boba Fett and Ahsoka Tano prime her for a live-action appearance in Jon Favreau and Filoni’s The Mandalorian saga, in either Temuera Morrison and Ming-Na Wen’s The Book of Boba Fett or Rosario Dawson’s Ahsoka.

An assassin trained in the ways of the dark side by Count Dooku, Asajj Ventress yearned to be considered a true Sith, but such status wasn’t allowed under the Sith’s Rule of Two. Ventress fought with twin red-bladed lightsabers, and clashed with Obi-Wan Kenobi and Anakin Skywalker many times. But her destiny would not lie with the Sith. After Dooku rejected her as his apprentice and tried to kill her, Ventress returned to her roots as a Nightsister, made a living as a bounty hunter, and – in the strangest twist of all – rediscovered the way of the light that she’d rejected long ago as a Jedi Padawan.

Would you like to see Asajj Ventress return to the Star Wars franchise in animation or live-action?