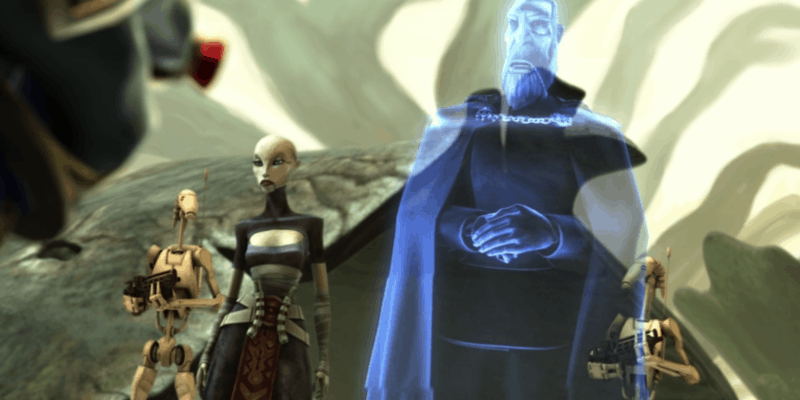 The Sith assassin, who was taken in by the Separatist Sith Lord Darth Tyranus AKA Count Dooku (Corey Burton), played a vital role as one of the antagonists in The Clone Wars before eventually reconciling with the Jedi and starting a romance with Jedi Master Quinlan Vos later in the Star Wars franchise.

Voiced by Nika Futterman, the character has become a fan-favorite in the fandom ever since her inception in the Star Wars galaxy. Ventress often went to battle with characters like Obi-Wan Kenobi, Anakin Skywalker, and Ahsoka Tano in the Clone Wars series. With her powerful Force abilities, sheer ferocity, and striking lightsaber action, Ventress’s story finally ended when she sacrificed herself in Dark Disciple — the 2015 novel by Christie Golden.

Dark Disciple was adapted from an eight-episode Clone Wars arc, acting as an almost sequel to the popular Star Wars series, and saw Ventress fall in love with Jedi Quinlan Vos as they teamed up to execute Count Dooku.

Star Wars has become well-known for using a variety of media to tell their ever-expanding stories. More recently, Marvel Comics have used series like War of the Bounty Hunters and Darth Vader to explore events in-between George Lucas’ original trilogy and adding context to the rather muddled events of Lucasfilm’s sequel trilogy in the Star Wars universe.

That being said, sometimes even canon stories aren’t sacred and Star Wars Resistance actually almost “resurrected” Ventress for the show. The popular character was going to be brought back to duel Kylo Ren.

Speaking on the Friends of the Force podcast, Star Wars Resistance head writer, Brandon Auman — who also served as executive producer — revealed how Ventress might’ve appeared in the animated series despite Resistance taking place many years after her apparent demise — the show takes place just before the sequel trilogy begins.

“We had Mika Grey who, originally, early on, was actually Asajj Ventress in the storyline. An older version of Asajj Ventress. And that was Filoni’s idea.”

“And we were even gonna have a scene where Asajj Ventress takes on Kylo Ren. That was something we had discussed very early on.”

However, Filoni would later decide to remove Ventress from Star Wars Resistance.

“Filoni is notorious for changing his mind, and down the line, as we were progressing and the story had Asajj – I wrote the story – [Filoni] was like, ‘you know what, if Asajj comes in, that’s all the fans are gonna care about. They’re only gonna want Asajj, Asajj, Asajj, they’re not gonna care about any of the other characters.'”

Auman reveals how Filoni shutting down the Ventress storyline affected him:

“At first I was totally heartbroken. Because I thought it was so cool what we were doing with that character, and seeing how she had survived… so I was really bummed out […] I totally got what he was saying, it made perfect sense. From this point on, it’s going to be the Asajj show.”

Auman then goes on to discuss how the Star Wars fans might react if Ventress only showed up in a cameo sense:

“And if the episodes didn’t include Asajj Ventress, the fans were gonna be upset, or at least a percentage of the fandom who were watching it, who were suddenly seeing, ‘oh my gosh, it’s a Clone Wars character!’, and then it would kind of just derail the show, and [Filoni] was totally right.”

That being said, while Ventress might have made an exciting addition to Star Wars Resistance, especially taking part in a lightsaber duel with Kylo Ren, it is easy to see where Filoni is coming from — her arrival in the animated series would have been a huge talking point, not least in the sense of questions surrounding how she had survived her apparent death in Dark Disciple.

Nevertheless, Ventress remains one of the most interesting Star Wars characters, and anytime with her on the screen will be a win in most fans’ eyes.

Would you have liked to see Asajj Ventress in Star Wars Resistance? Let us know in the comments!