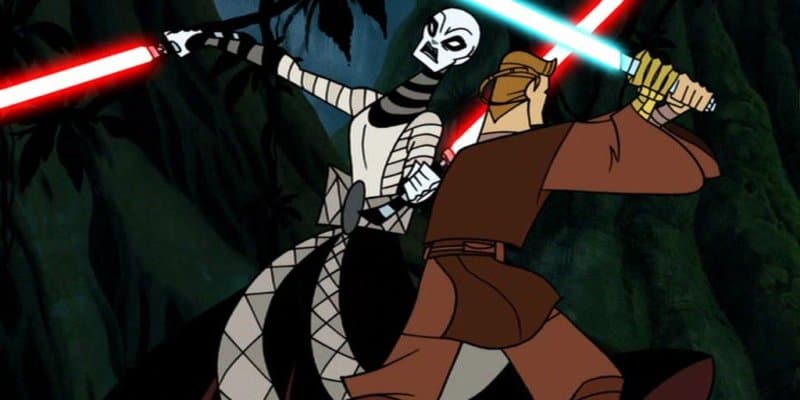 The Tartakovksy series began airing on Cartoon Network in 2003, unknowingly laying the groundwork for Filoni’s series — and, in some ways, the foundation for Jon Favreau and Filoni’s streaming hit, The Mandalorian. Now, an original Clone Wars voice actor has returned to the Star Wars franchise in an unexpected way via Filoni’s latest series, Star Wars: The Bad Batch.

The Bad Batch follows Clone Force 99 (all voiced by Dee Bradley Baker), originally introduced in the Filoni Clone Wars episode of the same name. The show’s first episode began during the execution of Emperor Palpatine’s Order 66, when the band of “defective” clones watched their fellow troopers turn on Jedi General Depa Billaba, who they had faithfully served for many years.

Used to mercenary missions for the Republic, Clone Force 99 quickly discovers that the new Galactic Empire — and Governor Tarkin — have little use for their unique ways.

In the fourth episode of the new streaming series, four of the clone troopers in the squad — Hunter, Wrecker, Echo, and Tech — land on Pantora with their new charge, female clone Omega, in tow.

Even before the team meets bounty hunter Fennec Shand (Ming-Na Wen), chaos ensues, as it typically does for our unlikely band of early Imperial dissenters, and, eventually, Hunter sells his “droid” Echo for 3,000 credits. During his time as an Astromech unit, Echo meets an adorable R2 unit with legs (I know, I need one, too) and a protocol droid named CG-67.

If you thought CG-67 sounded familiar, you weren’t wrong! The new Star Wars character was voiced by prolific voice actress Grey Griffin, who has played other characters including:

…Maz Kanata in the 2020 Lego Holiday Special, TC-G3 in 2019 Star Wars Resistance, Naare in Lego Star Wars: The Freemaker Adventures, and Padme Amidala, Asajj Ventress, and Shaak-Ti in Genndy Tartakovsky’s 2003 Clone Wars series as well as quite a few others.

Griffin’s IMDb page notes that she voiced Harmony in Star Wars Detours and that she is currently working on both the Pantheon TV series and the DC Super Hero Girls: Teen Power video game.

It is not yet known if Griffin will return to Star Wars: The Bad Batch or if she will be involved in future Dave Filoni projects within the Star Wars universe, such as The Mandalorian Season 3 or any of its spinoff shows.

Did you recognize Grey Griffin’s voice in The Bad Batch? Are you a fan of Tartakovsky’s Clone Wars 2003?