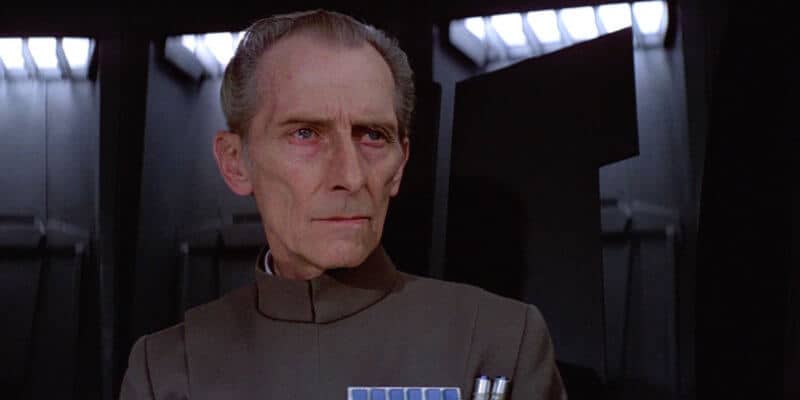 **SPOILERS For The Bad Batch Episode 3 Ahead**

As head writer Jennifer Corbett recently said in a press conference, the series is a “master class” in Filoni’s Star Wars wheelhouse.

But, if you’ve watched the most recent episode (“Replacements”), you might have noticed something that seems a bit strange. Tarkin appears to be wearing the same uniform insignia he wore in the original trilogy — a rectangular patch featuring six blue squares above three red squares and three yellow squares.

This seems odd, to say the least — why would Tarkin have the same rank in The Bad Batch, which takes place immediately after Star Wars: The Clone Wars during the execution of Emperor Palpatine’s Order 66, as he did many years later in A New Hope?

ScreenRant, however, made an astute observation about this particular insignia used by the Galactic Empire:

…because the sector governors, or Moffs, shared the same insignia under the Empire. When Tarkin arrived at Kamino in The Bad Batch episode 1, he was serving as an admiral, and consequently still had that insignia; but he seems to have been appointed governor of the Kamino sector, because in episode 3 he’s explicitly referred to as “Governor Tarkin.” Far from a continuity error, this actually serves to highlight just how much attention to detail Lucasfilm Animation has shown.

Wilhuff Tarkin — who Star Wars fans first met over 40 years ago when legendary actor Peter Cushing played the Grand Moff in Star Wars: A New Hope (1977) — has become an Imperial icon within the Star Wars franchise.

One of Darth Vader’s most trusted officers, Tarkin’s role thus far in The Bad Batch has been to assess Clone Force 99 — Hunter, Wrecker, Echo, and Tech (now without Crosshair) — and the rest of the former Clone Army of the Republic on Kamino.

He has been less-than-impressed with the “defective” clones’ unconventional tactics and, as a matter of fact, drove Clone Force 99 to realize the error of the new Empire’s ways, seeking aid from deserter Cut Lawquane (Dee Bradley Baker) and his family after they had an encounter with Clone Wars character Saw Gerrera (Andrew Kishino).

Tarkin had ordered Hunter and his companions to kill the “Separatist” group, who turned out to be a group of innocent refugees from Gerrera’s home planet of Onderon.

For now, only three episodes into this new Disney+ Star Wars series, we can’t yet know what Kaminoan Governor Tarkin will do at this largely unexplored point in the galaxy’s history. Judging from his past, it’s unlikely to be anything good for our band of unlikely heroes.

But, hey, at least it turns out there are no massive plot holes so far…

What are your thoughts on The Bad Batch after the first three episodes?

Next up for Star Wars fans is The Book of Boba Fett in December 2021. This Mandalorian spinoff is “the next chapter” in The Mandalorian saga, according to showrunner Jon Favreau. It will feature Temuera Morrison as bounty hunter Boba Fett and Ming-Na Wen as Fennec Shand.