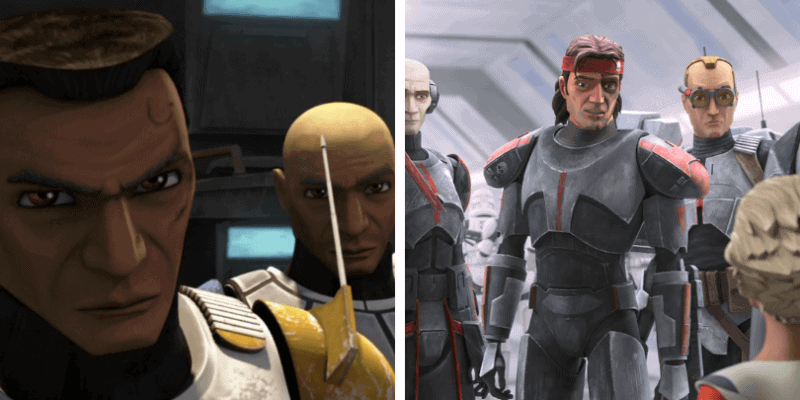 The Bad Batch was released on May 4, to the joy of fans across the galaxy. Now, however, there are reports that the series is being edited due to a Star Wars whitewashing controversy that has been making waves on social media.

This article contains spoilers for the first three episodes of Star Wars: The Bad Batch.

What is the Star Wars whitewashing controversy?

The Bad Batch has come under fire for whitewashing central characters. The term “whitewashing” refers to a white actor portraying a non-white character. Alternatively, it may also apply to lightening a non-white character’s skin tone to appear more Caucasian. This “Unwhitewash The Bad Batch” website (seemingly the source of the backlash) suggests that the new series does both.

The site calls attention to two concerns. The first is the casting of white actor Dee Bradley Baker as all the clone troopers. As you may know, every clone is based on the DNA of Jango Fett, who is portrayed by New Zealand actor Temuera Morrison in Star Wars Episode II: Attack of the Clones. Morrison also portrays Boba Fett, Jango’s son, in The Mandalorian.

Morrison is of Mãori, Scottish, and Irish descent and speaks with a traditional Māori accent. Notably, he has the darker skin tone of a Māori person, something that each of Fett’s clones also inherits in-universe.

However, many fans on Twitter point out that the clones in The Bad Batch have a notably lighter skin tone than they did in The Clone Wars. Additionally, the new character of Omega (a female clone) also has white skin, despite being voiced by a New Zealander.

Lucasfilm animation has a really sh*tty habit of taking the lightest possible shade from a POC’s skin then making it the skin color for the entire character model … We saw this with Rebels Ahsoka, too. #unwhitewashtbb, I’m tired.

Lucasfilm animation has a really sh*tty habit of taking the lightest possible shade from a POC’s skin then making it the skin color for the entire character model… We saw this with Rebels Ahsoka, too. #unwhitewashtbb, I’m tired.

We’ve been talking about #unwhitewashtbb for months but I didn’t think Caleb and Saw would also get a lighter pass. “Lighter” is not an acceptable aesthetic design. IK “It’s just the lighting” is going to be thrown around but .. this isn’t just tbb, it’s the legacy characters too.

“lighter” is NOT an acceptable aesthetic design

ik “it’s just the lighting” is going to be thrown around but.. this isn’t just tbb, it’s the legacy characters too https://t.co/gnxVzebDei pic.twitter.com/vPtJRffjBt

It’s not just the clones that people are talking about

While the clones of Jango Fett are undoubtedly the focus of social media users’ comments, the reappearance of the character Caleb Dume — later known as Kanan Jarrus — has also turned heads. Jarrus was a core member of the Star Wars Rebels cast, and he reappears in The Bad Batch as a padawan. In this series, he’s a young boy going by his original name, Caleb.

Fans have noted that his skin tone in the new series seems to be considerably whiter than it was in Rebels. In fact, some scenes show his skin to be as white as Anakin Skywalker‘s or Obi Wan Kenobi’s. This addition to the Star Wars whitewashing controversy didn’t go unnoticed by fans on social media.

Hey everyone I decided to redo the Bad Batch padawan Kanan because he was whitewashed and here are the results!! (Before and after) #unwhitewashtbb

Hey everyone I decided to redo the bad batch padawan kanan because he was whitewashed and here are the results!! (Before and after) #unwhitewashtbb pic.twitter.com/lcfaGyXOuM

Bad Batch spoilers. Why is Kanan the same skin tone as Anakin??? Why is he white? #unwhitewashtbb #BadBatch

// bad batch spoilers
–
–
–
–
–
why is kanan the same skin tone as anakin??? why is he white? #unwhitewashtbb #BadBatch pic.twitter.com/kW1Ymin9cV

Both pics are in similar lighting. Both pics feature Kanan / Caleb. If these pictures are so similar, then why is skin tone so different? #unwhitewashtbb

Both pics are in similar lighting
Both pics feature Kanan/Caleb
If these pictures are so similar, than why is skin tone so different? #unwhitewashtbb pic.twitter.com/vs7R2Jn8UF

How has Lucasfilm responded to the Star Wars whitewashing controversy?

Lucasfilm has currently not commented on the issue. However, according to i09, the creatives behind the series have listened to the criticism and have made changes as of last week’s episode:

A source familiar with production of The Bad Batch told io9 that in in the run-up to its premiere this week, changes to the lighting tools utilized by the animation team were made to moderate their effects in the premiere episode’s starkly-lit primary settings. Such tweaks will also be made in future episodes of the series.

It is important to note that this report remains unconfirmed by Lucasfilm or The Walt Disney Company.

Additionally, Rose Tico actress Kelly Marie Tran endured considerable racist trolling after the release of Episode VIII: The Last Jedi (2017). Boyega also spoke out about how he felt Finn and other non-white characters had been “pushed to the side” by Disney.

It is, however, important to be aware of the fact that Lucasfilm President Kathleen Kennedy sat down with Boyega for an “honest conversation” following his comments regarding the Star Wars franchise, so there has seemingly been an open dialogue between executives and the actor.

Inside the Magic will continue to monitor this story and will provide additional details if they develop.

What is Star Wars: The Bad Batch?

The Bad Batch is a brand-new show exclusive to Disney+ set during the rise of the Empire, after the end of the Clone Wars. It follows a group of experimental Clone Troopers who we first met in season seven, episode one of Star Wars: The Clone Wars. Here’s the official synopsis of the show and the team from Star Wars.com and the Clone Wars wiki:

[Captain] Rex recruits ARC Trooper Jesse and medic Kix while Cody enlists the help of an experimental Clone Commando squad, Clone Force 99. Their genetic mutations and brash attitudes are a source of mistrust and conflict between themselves and the regular clones, but Cody convinces them to work together on this mission. As they enter approach the Separatist cyber station, their gunship is shot down by enemy fire, severely injuring Cody in the crash.

Episode one and two of Star Wars: The Bad Batch are available to stream on Disney+. It’s created by Dave Filoni, who also oversaw The Clone Wars and worked on The Mandalorian. It’s unknown whether fan favorite characters like Ahsoka Tano and Darth Vader will join Captain Rex, Tarkin, and Saw Gerrera.

What do you think of the Star Wars whitewashing controversy? Let us know in the comments below.