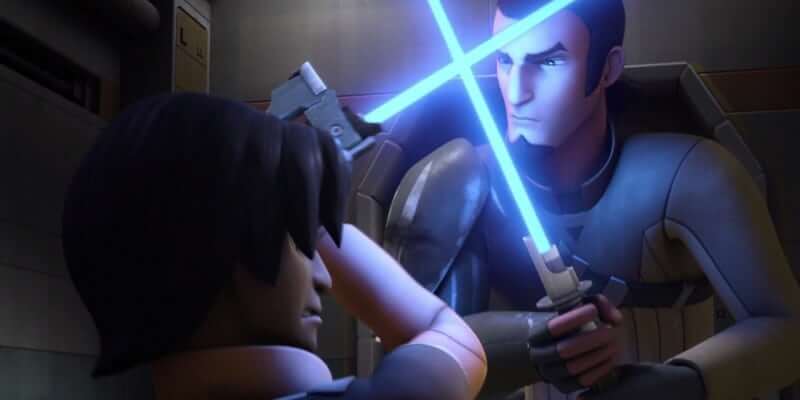 AUTHOR’S NOTE: THIS PIECE CONTAINS MAJOR SPOILERS FOR “STAR WARS REBELS” UP THROUGH THE MOST RECENT EPISODE, THE 2016 MOVIE “ROGUE ONE: A STAR WARS STORY”, AND STAR WARS IN GENERAL. READ AT YOUR OWN RISK IF YOU’RE NOT YET CAUGHT UP.

With those immortal words– among his very last– the wisest (and possibly oldest) Jedi Master became one with the Force and put his remaining faith and hope into his still-young student Luke Skywalker, who then took it upon himself to confront his father Darth Vader and the evil Emperor Palpatine aboard the second Death Star at the end of “Return of the Jedi”. But is Luke’s mission (not to mention his importance in the grand scheme of things) minimized by the possibility that there might be other Jedi still around after all?

Any Star Wars fan knows, after the end of the Clone Wars Palpatine enacted Order 66, effectively wiping out the Jedi Order by turning their companion Clone Troopers against them. As far as casual viewers were concerned, the only Jedi meant to have survived this purge were Yoda and Obi-Wan Kenobi (of course readers of the novels in the now-jettisoned Legends canon knew this list to be much longer, but at this point that’s entirely irrelevant). Then, after Luke, Force-endowed son of Anakin Skywalker came under the tutelage of Kenobi, he stepped into a larger world and was on his way to becoming the first of a new generation of Jedi. And the rest is Star Wars history. Or so we thought.

“Star Wars Rebels” is a half-hour animated series that debuted on Disney XD in October of 2014 and is set in the current Star Wars canon, just a few years before “Episode IV – A New Hope”. Despite the events mentioned above, two of the main characters on the show are in fact Jedi: Kanan Jarrus and his Padawan learner Ezra Bridger. As of the most recent batch of episodes, both Kanan and Ezra are alive and well and regularly using their Force powers to battle the Empire– although Kanan suffered blinding at the hands of the devious Maul in the second-season finale.

When I first started watching “Rebels”, I assumed that both Jedi were destined to perish by the end of the series, in all likelihood sacrificing themselves for the greater good. While the show is ostensibly for kids, airing on what is essentially a somewhat-more-mature version of the Disney Channel, “Rebels” rarely shies away from the darker elements of Star Wars. And though the series has yet to kill off a major character, unnamed soldiers on both sides of the Galactic Civil War die regularly in starship explosions and ground battles alike. In the carnage department, “Rebels” certainly isn’t any less Star Wars than the original “Star Wars”.

But that realization is also where I started to have my doubts about the fates of the show’s heroes– we’ve come to love and admire Kanan and Ezra, and for the most part, Star Wars tends to wait until a beloved character at least gets pretty old before it kills them off (see the demise of Obi-Wan in “A New Hope”, or a certain scruffy-looking scoundrel in 2015’s “Episode VII – The Force Awakens”). Now, until about a month ago, my method of explaining that preconception away in terms of the “Rebels” problem was that I wouldn’t put it past the show’s creators to do something so bold and unexpected as to eliminate the youthful protagonists of a Star Wars story, especially if it would be the first time that had ever happened.

Clock-wipe to December 12th of this past year, when I sat in the press screening of “Rogue One: A Star Wars Story” and discovered that the outcome of Jyn Erso and her unlikely band of Rebel heroes was very similar to what I imagined would eventually happen to the crew of the Ghost. Long story short, now it’s been done. Sure, background audio and cameos in “Rogue One” confirm that “Rebels” characters Hera and Chopper are still kicking around Yavin 4 just before “A New Hope”, but the events of the movie also mean that Kanan and Ezra can’t go out in a blaze of glory as I’d hoped without it seeming at least a little bit repetitive.

So what are the other options? The two Jedi could be somehow relieved of their powers, which in itself would be something we haven’t quite seen before in a Star Wars story. Or they could be sent to some distant, unexplored part of the galaxy without means of return, which would go a long way to explaining the characters’ absence from the Rebellion of the original trilogy. Because let’s face it, knowing that Yoda is aware of their existence (see the first-season episode “Path of the Jedi”) and that it appears they may also encounter Obi-Wan this year (as shown in the mid-season trailer for season three), it just doesn’t make sense to leave their destinies unknown.

My problem with “Star Wars Rebels” isn’t at all one of quality– I really enjoy the show and look forward to watching it on a weekly basis. My problem is that, for the sake of the larger Star Wars saga, I ultimately kind of want both Kanan and Ezra to die before the series ends, because I want Luke’s journey to be as important as it always seemed. And now, after seeing “Rogue One”, I want their deaths to be meaningful and wholly unique in a way that thoroughly differs from the deaths in that movie. Is that too much to ask? Am I being too demanding as a fan? When it comes to Star Wars, I sure hope not.

“Star Wars Rebels” airs Saturday nights at 8:30 PM on Disney XD, and is currently in the middle of its third season.