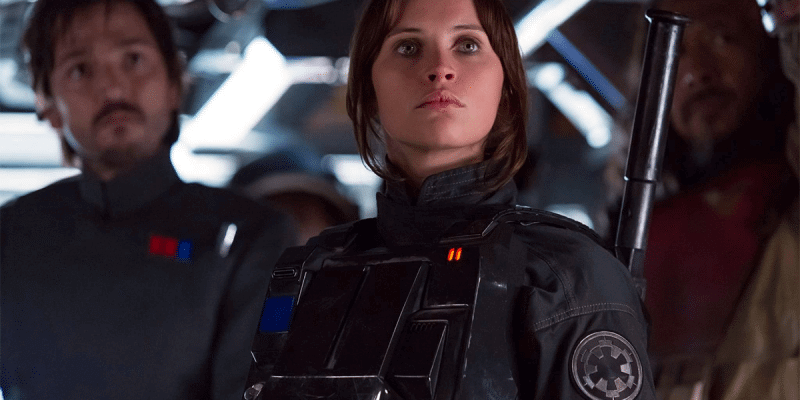 It feels weird to call anything with the brand name “Star Wars” emblazoned on it a gamble, but “Rogue One” would be the movie with which to do it. It’s the first theatrical Star Wars entry without a Skywalker as a main character (or the search for a Skywalker as its central driving force, as it were.) It’s also the first and only Star Wars movie to crank up the dial on gritty wartime realism, and yet the final result somehow manages to be among the best that Star Wars has to offer, despite the notably unconventional approach.

“Rogue One” is also a gamble because it never tries too hard to be a crowd-pleaser. Many of the characters fit in somewhere in that big gray area between good and evil. That’s not to say the characters aren’t likeable. In fact, I’ve been having an internal debate about which of the new cast will be the breakout star of the film. Will it be captive Rebel agent Jyn Erso (played tough-as-nails by the otherwise waifish Felicity Jones of “The Theory of Everything” fame)? Or the hard-nosed and cutthroat Captain Cassian Andor (Diego Luna from “Y Tu Mama Tambien”)? Or what about the movie’s designated comic relief, the reprogrammed Imperial droid K-2SO (performed in both voice and motion-capture by “Firefly”‘s Alan Tudyk)? These are all viable contenders for the standout among the ensemble, and I haven’t even gotten around to mentioning the showstopping Force-sensitive blind warrior Chirrut Imwe (martial arts master Donnie Yen). Truly the on-screen talent of “Rogue One” represents an embarrassment of riches. But what about the story? It takes place in the period between Episodes III and IV of the larger Star Wars saga. All of the above characters (and more) are enlisted by the fledgling Rebel Alliance to track down a defected Imperial pilot (Riz Ahmed) who’s carrying information provided by a brilliant scientist (Mads Mikkelsen)–not coincidentally, Jyn’s father–who was coerced into designing the newly-built Death Star’s superlaser. The team must eventually travel between several worlds on a covert mission to acquire the battle station’s plans and place them safely into Rebel hands, thereby setting up the beginning of the original Star Wars movie, “Episode IV: A New Hope”.

Obviously even the most casual Star Wars viewer is already well aware of how this mission turns out, but that doesn’t make the journey any less compelling, or the skirmishes any less exciting. It’s those action sequences, both in space and on the ground, that are the real strength of “Rogue One”, and they contain some of the most breathtaking battle choreography that I’ve seen in any movie, never mind just within this franchise. The climactic clash between the Rebellion and the Empire will feel similar in scope to anyone who’s seen “Return of the Jedi”, but the powers that be at Lucasfilm have still managed to find plenty of new (and extremely thrilling) tricks up their collective sleeves.

Director Gareth Edwards, who previously helmed the indie-creature-feature “Monsters” and the tepidly-received-but-successful 2014 “Godzilla” reboot, said at last week’s press junket that he and the creative team watched a whole bunch of old war movies before going into production on “Rogue One”, and it definitely shows. Whether in the trenches or in the skies, Edwards’s camera puts the audience right in the middle of the action, and anyone who has played last year’s smash hit video game “Star Wars: Battlefront” will recognize the visceral thrill that viewers will get when the blasters start firing and X-Wings start soaring.

The production designers behind “Rogue One” have also put in a lot of effort into matching the world of this movie to the Star Wars we know and love. The bare-bones sci-fi tech is a perfect match to the 1977 original, right down to the minimalist black, red, and silver Imperial control panels. And this is as close to a genuine spoiler as I’ll come during this review, but I will say that no fewer than a half-dozen familiar Star Wars faces pop up on-screen, both in brief winking cameos and in surprisingly fleshed-out roles, interacting with newcomers such as dastardly villain Orson Krennic (the convincingly devious Ben Mendelsohn).

The wonderful possibility of these ancillary, standalone Star Wars movies–or “Star Wars Stories”, as Disney is calling them– is that each one can carry with it a slightly different tone, or a whole new set of characters, or a completely different time period in the Star Wars universe. In that way, this new, almost-limitless storytelling experiment reminds me of the now-jettisoned Star Wars expanded universe of novels and comic books that I devoured as a teenager. “Rogue One” is a riveting, near-perfect way to begin transposing all those possibilities to a much larger scale, on the big screen.