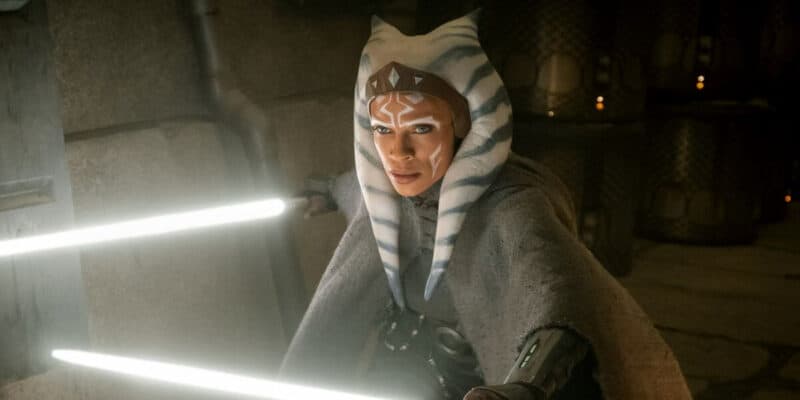 Ahsoka Tano is one of those characters that brings a smile to your face. From her time as Anakin Skywalker’s wide-eyed Jedi Padawan, to the hardened warrior hunting for Grand Admiral Thrawn on Corvus, Tano has faced many trials and tribulations during her life. With her first live-action appearance happening only last year and with many more stories to tell in The Mandalorian timeline, we have the ultimate guide to Ahsoka Tano.

Ahsoka Tano’s story before The Mandalorian

Who is Ahsoka Tano?

Ahsoka Tano is a Togruta Jedi, first introduced into the Star Wars franchise in Star Wars: The Clone Wars (2008) as Anakin Skywalker’s Padawan. Tano was assigned to Skywalker by Grand Master Yoda who coined the nickname “Snips” for her during the Battle of Christophsis. The Jedi went on to become a respected commander in the Grand Army of the Republic, where she contributed to many victories against Count Dooku’s Confederacy of Independent Systems.

Tano was born on the planet Shili, but after being discovered on her homeworld by Jedi Master Plo Koon, she was raised on Coruscant at the Jedi Temple. The Jedi character was created by George Lucas for the Lucasfilm television show Star Wars: The Clone Wars. Dave Filoni — a supervising director and writer on the animated series — was heavily involved in early developments of the character.

For Ahsoka Tano’s appearances in The Clone Wars, Star Wars Rebels and a voice cameo in Star Wars: Episode IX – The Rise of Skywalker (2019), the character was voiced by Ashley Eckstein. While her live-action debut in The Mandalorian, the Jedi was portrayed by Rosario Dawson. All Tano’s appearances are considered Star Wars canon including her eponymous Star Wars novel, “Ahsoka”, by EK Johnston.

Where has Ahsoka Tano been and what has she done before the events of The Mandalorian?

Ahsoka Tano turned up in The Mandalorian to join forces with Mandalorian Din Djarin (Pedro Pascal) in a quest to defeat Magistrate Morgan Elsbeth (Diana Lee Inosanto) on the planet Corvus. Tano went on to refuse Djarin’s request that she train “The Child”, revealing however, his true name of Grogu.

Before her appearance in Jon Favreau’s Disney+ series, the Jedi had a tumultuous history crossing paths with General Grievous, Sith apprentice Asajj Ventress and bounty hunters like Cad Bane. Tano’s first mission in The Clone Wars movie saw her aid in the rescue of Rotta, Jabba’s son, on both Teth and Tatooine, which helped secure a vital alliance during the war.

Skywalker’s apprentice played a key role in the second Battle of Geonosis, and even died during a mission on Mortis but was revived by the light side Force wielder, the Daughter. Tano’s life took a horrific turn when she was framed for the bombing of the Jedi Temple hangar, escaping to clear her name. Skywalker eventually did so, revealing fellow apprentice Barriss Offee to be the true orchestrator of the attack. Nonetheless, Tano’s potential barring from the Jedi Order left her faith in the Jedi Council damaged. After facing Sith Lord Maul during the Siege of Mandalore, Tano was forced into hiding along with her friend, Commander Rex, after Darth Sidious enacted the devastating Order 66.

Under the disguise of “Ashla”, the Jedi joined Senator Bail Organa’s growing rebellion and acted as a rebel intelligence officer under the code name “Fulcrum”. While gathering intelligence, Tano became aware of Ezra Bridger — a new Jedi Padawan — and eventually faced Darth Vader and the Inquisitors, which ultimately left her lost in the decimated Sith Temple on Malachor. Bridger saved Tano using a portal to the World Between Worlds — a Force dimension connecting all time and space — and vowed to find him again after returning to her own timeline.

After the Galactic Civil War, Tano joined forces with Sabine Wren — the Mandalorian revolutionary — to search for the now missing Bridger. Ahsoka’s quest would lead her to Calodan on Corvus as she continued her hunt for the Jedi, as well as searching for the villain, Grand Admiral Thrawn — the Imperial Commander that took over the Galactic Empire’s military forces after the Battle of Endor.

What is Ahsoka Tano’s place within the plot line of The Mandalorian?

In The Mandalorian, Ahsoka Tano is introduced on the planet Corvus where she is at an impasse with the Imperial Magistrate Morgan Elsbeth. Tano wants Elsbeth to surrender the city of Calodan and reveal her master’s (Admiral Thrawn) location. The Mandalorian and “The Child” arrive and search out the Jedi, following directions from the Mandalorian warrior, Bo-Katan Kryze (Katie Sackhoff).

Tano — who reveals “The Child’s” true name — ultimately refuses to train Grogu as she can see how attached he has become to his companion, Din Djarin, and fears the worst. Remember, she had a front row seat to some of Anakin Skywalker’s early decisions that ultimately led him down a dark path. Instead, she directs them to the planet Tython where Grogu can contact any remaining Jedi after the bounty hunter helps her take down the Magistrate and her forces.

Who is Ahsoka Tano in love with?

What romantic history does Ahsoka Tano have?

On a mission with Padmé Amidala to negotiate a peace treaty between the Republic and the Confederacy on the planet Raxus, Ahsoka Tano met Lux Bonteri — the son of Separatist Senator. The two connect over their dislike for the opposing side and quickly establish a tentative friendship.

After his mother is killed, Bonteri sets out on a vengeance mission leading him to the Death Watch — the Mandalorian terrorist splinter group. Later, Bonteri kisses Tano to stop her from getting caught by the Death Watch. The two never really begin a relationship during their time spent together, and in the end remain as friends after Bonteri becomes a member of the Republic Senate.

Who is Ashoka Tano in love with in The Mandalorian timeline?

As the Jedi’s appearance was so short-lived in the second season of The Mandalorian, neither Jon Favreau or Dave Filoni revealed who Tano was in love with, or if she was at all. Her energy seems to point towards finding her fellow Jedi, Ezra Bridger, and confronting Thrawn rather than igniting any romantic relationships.

What do fans think will happen with Ahsoka Tano on the battlefield of love?

Some fans theorized that Anakin’s apprentice would fall in love with Din Djarin, although nothing came to fruition in the Star Wars live-action television series. Both The Mandalorian Season 3 and spinoff series, Ahsoka, are coming down the pipeline, however, so who knows what Jon Favreau and Filoni could have in mind for the future.

How powerful is Ahsoka Tano?

What training did Ahoka Tano receive, and who did she receive it from?

After being brought to Coruscant by Jedi Master Plo Koon, Ahsoka Tano began her training at the Jedi Temple. She later travelled to the ice planet Ilum, where she sourced a crystal in order to make her own lightsaber. In the midst of the Galactic War, fourteen-year-old Tano was assigned as the Jedi Padawan of Anakin Skywalker under the orders of Jedi Master Yoda.

Despite being a Jedi, Tano also received training from her friend and ally Clone Trooper Captain Rex in the realm of warfare, as well as knowledge in diplomacy and politics from Padmé Amidala during their attempted treaty with the Separatists.

How had Ahsoka Tano proven her power before the events of The Mandalorian?

The spirited Jedi Padawan proved her strength in multiple ways during her tenure in Star Wars: The Clone Wars and Star Wars Rebels, showing that she can successfully command her own battalions. She also famously faced off against the infamous General Grievous and Count Dooku’s Sith apprentice Asajj Ventress, despite her limited Jedi training.

After being taken captive by the Trandoshans to be hunted for sport, Tano inspired and led a revolt, her inventive attitude stemming from her time under Skywalker’s tutelage. The Jedi oversaw the lightsaber crystal collecting ceremony — the Gathering — with the Jedi younglings, escorting them to Ilum to continue their Jedi training, and become the lightsaber wielders they are destined to be.

Even though Tano was acquitted of the Jedi Temple bombing, she lost faith in the Jedi and ended up reconnecting with her old Jedi Master Anakin Skywalker and the Jedi Knight, Obi-Wan Kenobi on Mandalore. This encounter ultimately led her to duel and defeat the Sith Lord Maul. Years later, she would go on to face Darth Vader — although, she was not aware this was her old master, Skywalker.

How is Ashoka Tano still proving to be a powerhouse in The Mandalorian timeline?

Ahsoka Tano has had a turbulent life during her time as a Jedi and a rebel, and her live-action debut in The Mandalorian brought a hardened version of the character to our screens. Living a solo life, Tano has still retained her power even after living in hiding for so long. She successfully takes on the Magistrate’s forces, eventually defeating the villain and claiming her Beskar spear before handing it over to the eponymous Mandalorian himself, Din Djarin.

The fate and future of Ahsoka Tano

What does the future hold for Ahsoka Tano?

Although only appearing in one episode of The Mandalorian (Chapter 13: “The Jedi”), Ahsoka Tano played a key role in the development of Din Djarin’s and Grogu’s story. In unveiling “The Child’s” name and providing a hint at her goal to catch up with Admiral Thrawn, the Disney+ show gave Star Wars fans a look at the next steps for the famous Jedi Knight. We can expect Tano’s future to include both Thrawn and Ezra Bridger.

What fate is Ashoka Tano intricately tied to and how has that factored into her story?

Being one of the last remaining Jedi, Ahsoka Tano is uniquely tied to the Jedi’s existence. We know that Grogu is Force-intuitive, and Tano even mentions how placing Grogu on the seeing stone on Tython could connect him with any other remaining Jedi. Although, she does mention how there aren’t many of them left.

As Anakin Skywalker’s apprentice, Tano is also linked to the grander Skywalker Saga. With Luke Skywalker showing up at the end of The Mandalorian Season 2 — which takes place five years after the events of Star Wars: Episode VI – Return of the Jedi — there is a chance that Tano will at some point connect with the son of her former master. We know that there are those Sebastian Stan rumors and a potential Luke Skywalker Disney+ show in the works, so this could be a way Lucasfilm might explore Ahsoka’s fate in the future.

How will Ashoka Tano affect the plot of The Mandalorian?

With The Mandalorian Season 3 announced, it is possible that we will see Ahsoka Tano reprise her role in the bounty hunter Western drama. And with her pivotal role in getting Grogu in the hands of Luke Skywalker, she has definitely provided a vital move on for The Mandalorian‘s storyline, which takes place after the original trilogy.

While Ahsoka Tano’s appearance is expected in the third season of Jon Favreau’s show, it will be in her eponymous series, Ahsoka, that fans can expect to get even more answers of the Jedi Knight’s next steps. Both Ahsoka and The Mandalorian Season 3 will join The Book of Boba Fett and Rangers of the New Republic in a new wave of Star Wars television event series and will all take place in the same timeline.

Whatever happens next for Anakin’s apprentice, it is clear that the fan-favorite Ahsoka Tano has experienced a lot during her life in a galaxy far, far, away. And more is yet to come in Ahsoka’s story that is sure to cement itself into Star Wars history.

Are you excited to see Ahsoka Tano come back into the Star Wars universe?