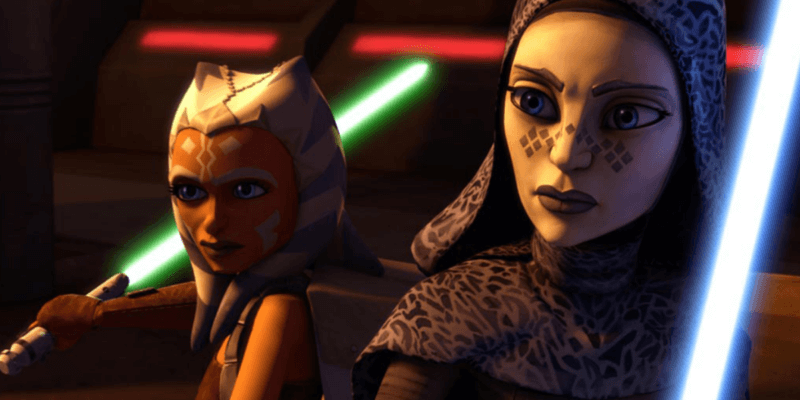 Star Wars is on mission to make a shared universe of stories with the “Mando-Verse,” another name for the impressive slate of planned spin-offs and stories made possible by the overwhelming popularity of the Disney+ series, The Mandalorian. Seemingly seeking to replicate the success of the Marvel Cinematic Universe, Lucasfilm and Disney+ have embarked on a journey to build upon the considerable existing Star Wars mythology in a way that surprises and excites fans.

Showrunners for The Mandalorian, John Favreau and Dave Filoni have had success so far in mining not only the mythology of the cinematic Skywalker Saga, but also that of Filoni’s animated Star Wars series The Clone Wars and Rebels. Specifically, The Mandalorian season 2 introduced audience favorites from Star Wars: The Clone Wars and Star Wars: Rebels, Ahsoka Tano (Rosario Dawson) and Bo-Katan (Katee Sackhoff), into the live action realm.

If Filoni and Favreau stick to this playbook, it’s possible that Star Wars is about to detail the hidden truth of a former female Jedi Knight turned powerful traitor. Fan theories have started to take hold that this disgraced but powerful Jedi with close ties to Ahsoka Tano could be revealed as an “Inquisitor” — a Force-sensitive agent of the Dark Side tasked by the Empire with hunting down and destroying the remaining Jedi in the aftermath of Order 66.

The character in question is Barriss Offee, a Jedi Knight who first appeared in the film Attack of the Clones (2001) portrayed by Nalini Krishan. Barriss Offee also became an important character on Genndy Tartakovsky’s Clone Wars voiced by Tatyana Yassukovich, and by Meredith Salenger in the similarly titled Star Wars: The Clone Wars.

Who is Barriss Offee?

Trained as a Padawan under Jedi Master Unduli, Barris Offee earned her stripes fighting in the First Battle of Geonosis that marked the beginning of the years-long conflict known as The Clone Wars. During this timeframe, Offee formed a friendship with Ahsoka Tano, a fellow Jedi Padawan, who was under the tutelage of Anakin Skywalker. Throughout the Clone Wars, Offee and Tano remained close friends, even as Offee increasingly viewed the Jedi order with disdain, questioning their role in the wars. Eventually, her disillusionment with the Jedi Council led her to carry out a a bombing of the Jedi Temple, framing her comrade Ahsoka Tano for the act.

Anakin Skywalker was able to apprehend Offee and exonerate his Padawan, Tano. Before the Jedi tribunal, Barriss Offee admits that she had been corrupted by the Dark Side, before being led away by her captors. Ever since this moment, Clone Wars fans have wondered if Offee’s story had truly come to an end. With new animated series, The Bad Batch, set to premiere on Disney+ May 4th, will fans learn more about Offee’s attraction to the Dark Side?

Who are ‘The Inquisitors’?

The Order of Inquisitors is an elite squad of Force-sensitive Dark Side operatives who answered to Darth Vader at the command of Emperor Palpatine. While not Sith Lords themselves, the Inquisitors were able to access the Dark Side of the Force. Led by the Grand Inquisitor, they searched the galaxy for Jedi who had survived the Jedi Purge brought about by Order 66, political enemies of the Empire, and any children who may have demonstrated Force-sensitive abilities in order to destroy them.

What is the Barriss Offee fan theory?

A Star Wars fan theory currently making the rounds on reddit holds that the disgraced Jedi Padawan Barriss Offee will be exposed as an Inquisitor in The Bad Batch. The new series is a direct spin-off of Dave Filoni’s The Clone Wars, and will follow Clone Force 99, an elite force of genetically modified clone troopers with highly specialized enhanced abilities, making their way in the galaxy as mercenaries in the post-Clone Wars era. As the storyline of The Bad Batch picks up where The Clone Wars left off, Star Wars fans have taken to reddit to opine that a Barriss Offee reemergence may be on the horizon.

A thread first posted by u/HolonetMarauders opened up by asking,

“Could Barriss Offee be an Inquisitor in The Bad Batch?? Filoni did say he had plans for her a few years back and it’s interesting that “third sister/brother” is a vacant role at the moment.”

Could Barriss Offee be an Inquisitor in The Bad Batch?? Filoni did say she had plans for her a few years back and it’s interesting that “third sister/brother” is a vacant role at the moment. from StarWarsCantina

Indeed, in a 2015 panel discussion, Dave Filoni stated that in the original script for The Clone Wars episode “The Wrong Jedi,” Barriss Offee dies blowing up her own prison cell. Filoni went on to say,

“I didn’t want that fate for Barriss, so I cut that part. I had plans for Barriss.”

Is it possible that these plans could finally be realized in The Bad Batch? There are currently 11 known Inquisitors and the Fourth Sister (not third, as described on reddit thread) is unknown. It would stand to reason that a Force-sensitive former Jedi like Barriss Offee could be easily convinced to do the work of Order 66, rather than starting from scratch with a brand new Force-sensitive recruit – particularly one that has a history of blowing up the Jedi Temple.

JediGuyB agrees that Offee as an Inquisitor makes sense, adding to the thread:

“I do think Barriss is likely to be revealed as an Inquisitor eventually. Bat Batch is possible but it depends on if the squad encounters a Jedi survivor, but if not in that then maybe she’ll be in the Fallen Order sequel. So far every Inquisitor we’ve seen except Ninth Sister is dead, and she’ll probably die in Fallen Order 2 if not sooner. So Barriss being possibly the last Inquisitor would be interesting.”

What do you think? Will Barriss Offee appear in The Bad Batch? Who else could be the ‘Fourth Sister’?