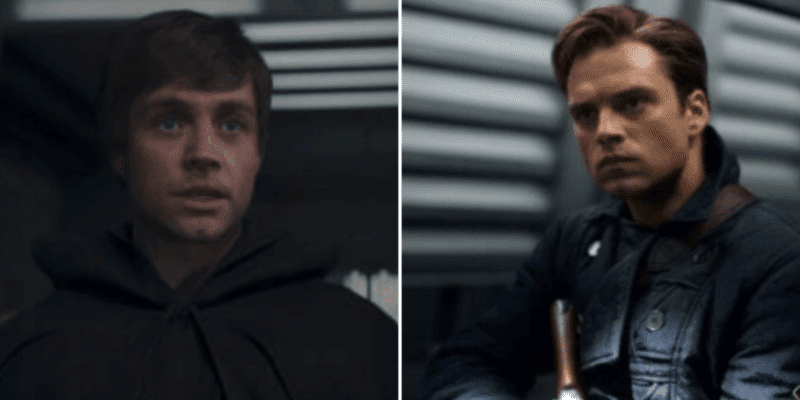 The rumor that Sebastian Stan will be cast as the next Luke Skywalker isn’t going away. In fact, it seems that conversations about the Bucky Barnes/Winter Soldier actor playing the famous Jedi who launched a pop culture empire, are gaining momentum. Both Stan and Skywalker actor, Mark Hamill, have weighed in on the rumors that began when Star Wars fans noticed the uncanny resemblance between Stan and a young Hamill. A deep fake fan video from Stryder HD — who also famously made Millie Bobby Brown a double of Carrie Fisher — gave fans a glimpse at what Stan meets Skywalker would look like.

Stan — who is most well-known for his role as James Buchanan “Bucky” Barnes in the Marvel Cinematic Universe — said that he would only consider playing the iconic Jedi Knight if Mark Hamill himself asked him. Hamill responded by stating that he has no say in casting decisions. This back and forth has definitely reignited the discussion over whether Sebastian Stan might star as a young Luke Skywalker in an upcoming Star Wars streaming show, such as the rumored Skywalker-centric show that could make Mara Jade canon.

Of course, we have already seen a young Mark Hamill on our screens recently when he appeared in the heavily guarded Season 2 finale of Jon Favreau’s The Mandalorian. The CGI de-aging technology that Lucasfilm previously used in Rogue One: A Star Wars Story (2016) – where we saw a young Carrie Fisher (Princess Leia) brought back to the big screen – was a mesmerizing hit with fans. Prior to that we saw Hamill bring Luke Skywalker back in Star Wars: Episode VII – The Force Awakens (2015) which booted off the sequel trilogy of the Star Wars franchise.

So, if Disney and Lucasfilm wanted to bring Luke Skywalker back to our screens (again) as a starring role in a new television series, and most likely with Grogu (AKA Baby Yoda), then bringing in a new actor would probably be the studios’ best bet. And who better than one who looks almost identical to the original Luke? We have already seen what Temeura Morrison’s return as Boba Fett did for Star Wars fans.

Now, Sebastian Stan has spoken even more about these rumors.

In a recent interview with MTV Asia, where Stan and Anthony Mackie (Sam Wilson/Falcon) were answering questions about the future of Captain America and their record-breaking show The Falcon and The Winter Soldier, talk quickly turned to the Skywalker casting rumors and the Star Wars universe.

When asked about the rumors that he was “the next Luke Skywalker”, Stan said:

“I always certainly hear about [the rumors] and I’m always slightly confused because I’m like if there are these conversations happening, why isn’t anybody calling me about it and having a conversation with me about it?”

“I mean, like anybody, I grew up on Star Wars and for me, Empire Strikes Back, was like one of my favorite movies, and Mark Hamill, you know, is one of the most iconic personalities. And Luke Skywalker is an iconic character…”

Most interestingly though, Stan went on to say how he felt the decision was out of his control:

“It doesn’t feel like it’s my choice. Whatever that needs to be will sort itself out and if it includes me in any way, you know, hey who knows?”

When asked if he “would like to [play the role]”, Stan said:

Don’t we all! Yes, Luke Skywalker — played by body double Max Lloyd-Jones — does turn up in The Mandalorian Season 2 (Chapter 16: The Rescue) to collect Grogu from Din Djarin (Pedro Pascal). But, with the show taking place five years after Star Wars: Episode VI – Return of the Jedi (1983), a potential Luke Skywalker series could possibly be set in between these events, or even after which would surely delight the Baby Yoda fans of the world, too.

Stan finished the interview and acknowledged the enormous pressure of taking on such a beloved and iconic role.

“And of course, it’s another one of those things where you’re like, well you don’t want to f— up that character. You want to get that one right.”

If Stan is somehow connected to the role, it is surely to be locked deep away in a Lucasfilm fortress. As the rumor develops and the more the actors involved weigh in on the potential casting, the bigger it seems to grow. Either way, Sebastian Stan is now tethered to Luke Skywalker even more so than ever before.

You can watch the full interview below or by clicking here.

Do you think Sebastian Stan will play Luke Skywalker?