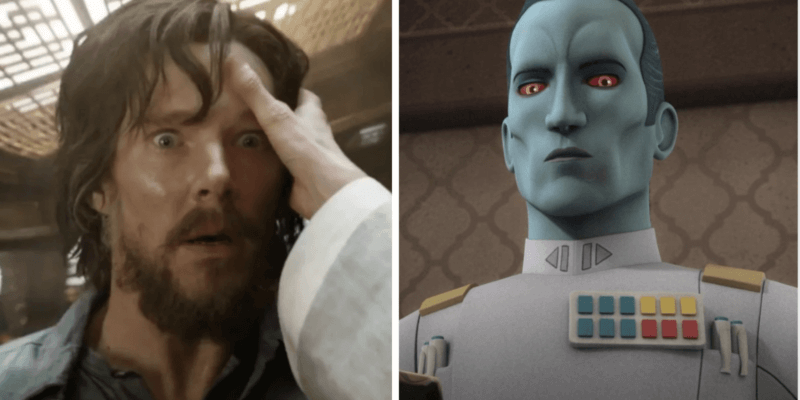 Marvel Cinematic Universe actor Benedict Cumberbatch is, perhaps, most well-known for playing Doctor Stephen Strange in the Avengers movies and his own standalone Doctor Strange (2016) film.

However, even with all of the recent hype for Marvel’s Phase 4, thanks in large part to the popularity of WandaVision, Cumberbatch has also been on the minds of Star Wars fans.

During The Mandalorian Season 2, animated Star Wars Rebels character Grand Admiral Thrawn was brought into the live-action canon for the very first time. The character was named as the “master” of Corvus Magistrate Morgan Elsbeth (Diana Lee Inosanto) when she fought Jedi Ahsoka Tano (Rosario Dawson) in the second season’s fifth episode, “The Jedi.”

This, of course, shocked the Star Wars fan community. Viewers immediately took to social media to begin speculating about who would play Thrawn in live-action.

Rebels voice actor Lars Mikkelsen — whose brother, Mads Mikkelsen, played Galen Erso in Rogue One: A Star Wars Story — has been named as a possible choice, but most fans want Mandalorian creator Jon Favreau and executive producer Dave Filoni to turn to the MCU for their Thrawn.

Both Robert Downey Jr. (Iron Man/Tony Stark) and Cumberbatch are popular options within the fandom. Cumberbatch, however, seemingly has no idea who Grand Admiral Thrawn even is — and, in fact, believes that he and Grand Moff Tarkin, played by the late Peter Cushing in the original trilogy, are the same character.

Upon being asked if he knew Star Wars fans wanted him to play Thrawn, the Marvel actor told Collider:

“Grand Admiral Thrawn? Does he turn into Peter Cushing, or something? Is that…?”

Collider’s interviewer informed Cumberbatch that Thrawn is, in fact, a “blue-skinned villain,” to which he responded:

“That’s a straight no from me, right now. There’s no way I want to be turned blue. I turned the air blue, very recently. No no, seriously, I have precious time with my children and I think sitting in a makeup chair and being painted blue, and the amount of time it would take to do that and then take it off at the end of the day might just… it’s not the right time in my life for that.”

For now, fans of the Star Wars galaxy will just have to hold out hope that RDJ is open to the role.

Per IMDb, Cumberbatch is currently filming two Marvel projects, Doctor Strange in the Multiverse of Madness (2022) and Spider Man: No Way Home (2022). He also has several other movies on his slate in the next couple of years.

In addition to his work in the Marvel Cinematic Universe, British actor Benedict Cumberbatch is known for The Imitation Game (2014), Star Trek Into Darkness (2013), and the BBC version of Sherlock Holmes (2010-2017).

Where will Thrawn show up in live-action?

Thrawn is expected to make his live-action debut in Ahsoka, one of the three spinoffs The Mandalorian is receiving.

The series will showcase Rosario Dawson reprising her role as Star Wars: The Clone Wars fan-favorite Ahsoka Tano, presumably as she searches the galaxy for Thrawn and fellow Jedi Ezra Bridger. The series is expected to serve as a live-action sequel to Star Wars Rebels.

Ahsoka, Rangers of the New Republic, and The Mandalorian Season 3 will interconnect and culminate in a special streaming event on Disney+.

Before Thrawn was introduced into the current Star Wars canon in Rebels, he was a fan-favorite in Star Wars Legends. The character first appeared in the Thrawn Trilogy of novels by Timothy Zahn.

Mara Jade — who went on to marry Luke Skywalker in the Expanded Universe — was another popular character from the Thrawn series. There have been rumors that she could also appear in The Mandalorian universe, alongside, perhaps Jedi Master Skywalker and Grogu (Baby Yoda).

Who do you want to see play Grand Admiral Thrawn in The Mandalorian saga?