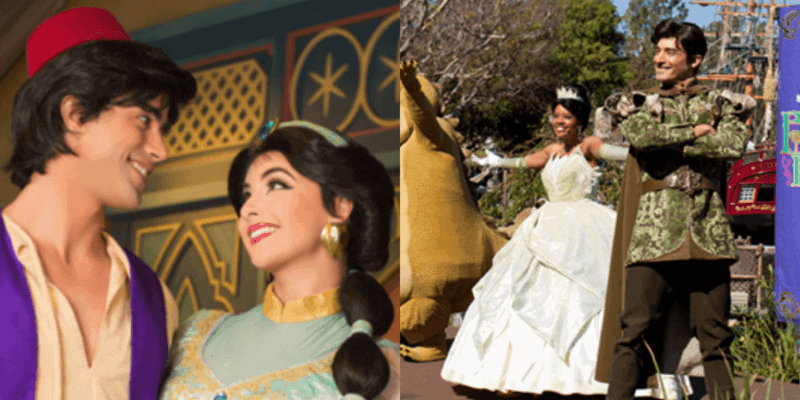 It’s not uncommon for Disneyland and Disney World Guests to have memories of meeting characters at the Disney Parks — but it seems as though many Guests can recall seeing these character portrayed by white people instead of people of color, or people who are of the ethnic background of that character.

Now, some fans are making an effort to hold Disney Parks and Resorts accountable to casting people of color in the roles that were written for them, rather than casting white men and women to portray characters like Aladdin and Jasmine.

A petition on Change.org called “Make sure Disney stops casting white people for roles that require real people of color” currently has over 5,000 signatures and states the following:

Disney claims to care about people of color, but they continue to cast white men and women in fake spray tans for these particular roles. Important characters such as; Jasmine, Pocahontas, Moana, Black Panther, Li Shang, and Aladdin, within the Disney entertainment arenas around the world, need to be played by the people of color they were brought to life by. It’s extremely disrespectful to the community of color and it needs to stop. Young kids come to the parks looking forward to meeting these characters, aka their personal heroes, and are instead, sadly greeted by white men and women in cheap spray tans. Disney has more than enough monetary resources and beautiful actors to choose from, there is absolutely no reason as to why this should be allowed to continue. So please sign this petition in hopes of making these much needed changes a reality.

Related: Disney Shares More Statements Against Racism as Protests Continue Across the U.S.

Fans state that casting people of color in roles such as Aladdin, Jasmine, Moana, Pocahontas, Tiana, Mulan and more is the most authentic approach to bringing these characters to life. Not only that, but they also believe that it is morally right, and Disney should make an effort to find more actors to portray these roles.

Some supporters shared their reasons for signing the petition.

One supporter said, “I’m signing the petition because I grew up not really having role models that looked like me. They were all white.”

Another wrote, “This both ruins the magic for the adults who notice the problem, as well as, can confuse the children who look up to these important figures in Disney movie history.”

If you or someone you know would be perfect for any Disney role, click here to see all upcoming auditions as well as set alerts for when new character lookalike, character performer, or character parade performer auditions are announced.

Related: OpEd: Disney Needs to Stand Firm Against Racism and Oppression in the Face of China, Too

What are your thoughts on character casting in the parks? Let us know in the comments!