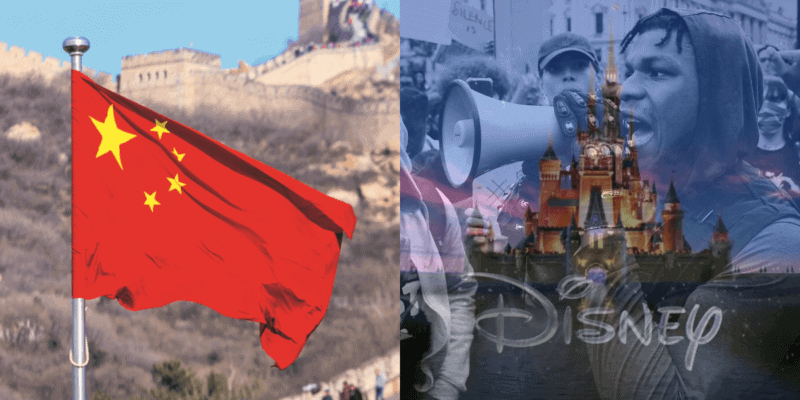 The Walt Disney Company has decided to take a stand against racism. After sending messages across social media from all of its assets, Disney donated $5 million to the NAACP and other causes fighting for social justice.

Then, when Star Wars star John Boyega took to the streets of London to protest, Disney and Lucasfilm stood behind him. At least, they did with their words.

But where was this dedicated stance against the racism Disney faced when it took its movies to China? Why did Disney choose to hide faces, rework roles, and alter stories just because the Chinese did not like a person’s color, race, and sexual orientation?

Don’t get me wrong, I love the Walt Disney Company and the wonderful movies they create. I’m not standing here to just call them out — I’m challenging them to do better. If Disney truly wants to stand up against racism and discrimination, it will do so in the face of Communist China as well as in the face of that same hatred still found in America.

Several people have already taken to social media to take this stand. One user, @4thSnake, summed up the situation well saying, “It’s ironic that Disney kept shying away from Finn in the Chinese poster for TFA and then in the actual films after that, when John Boyega is truest revel in the cast.”

It's ironic that Disney kept shying away from Finn in the Chinese poster for TFA and then in the actual films after that, when John Boyega is truest rebel in the cast. pic.twitter.com/IMpY3NkyDQ

Let’s get a closer look at those two posters:

Now, Disney supposedly kowtowed to the Chinese market on a number of aspects to make the Star Wars sequel trilogy successful in that market. Staunch racism against Black people in Mainland China caused the poster to be redesigned and hide Finn, and give him a more downplayed role in Star Wars: The Last Jedi. Widespread discrimination for homosexuality in China has been reportedly credited for killing any chance of FinnPoe coming out in The Rise of Skywalker.

But the latest Star Wars trilogy wasn’t the only time Disney gave into the discrimination of Mainland China. When it came time for Marvel to release its first mostly-Black-casted movie and its first Black superhero with Black Panther, Disney and Marvel also kowtowed in the poster design.

Disney always appeals to the Chinese market by doing this they did the same thing with Black Panther pic.twitter.com/1useTYW2Sw

And that’s not all.

A recent article in Breitbart shares the following:

When Senator Ted Cruz (R-TX) introduced a bill in May to block federal assistance for movie studios that bow to Chinese Communist censorship, he cited numerous examples of Hollywood self-censorship, including the elimination of a Tibetan character from a Marvel superhero film (the Ancient One from Doctor Strange, whose replacement with a middle-aged Scottish woman was so bizarre that Doctor Strange himself comes very close to lampshading it) and the even more unbelievable decision by Disney-owned 20th Century Fox to eliminate all references to Freddie Mercury’s sexuality from the Chinese release of Bohemian Rhapsody. That bit of self-censorship was a cruel posthumous insult to Mercury, who might have preferred being replaced by a Scottish woman to highlight the absurdity of telling his life story without mentioning he was gay.

Outside of movies, Disney has also remained completely muzzled while the people of Hong Kong protested against their own oppression–which, by the way, has caused Hong Kong Disneyland to lose hundreds of millions of dollars–and as China works to shatter international agreements and completely eliminate the island’s autonomy.

Disney didn’t speak up when the star of their Mulan live-action remake declare her support for the authoritarian and brutal actions of Hong Kong police. The same kind of police brutality they stand against today. Disney has also remained completely silent while the Chinese Communist Party force Uyghur Muslims into concentration camps in Xinjiang, as well as regarding China’s habit of continuously threatening to invade Taiwan.

That is not the Disney I grew up with. That Disney taught me to be kind to everybody, to never turn a blind eye, to fight for freedom, to stand up for what is right, and to have the courage to look evil in the eye and face it head-on. That is the Disney we need right now.

But Disney is not alone in turning a blind eye to these social atrocities in the name of Yuan (Chinese currency). In fact, it’s a problem most of Hollywood has.

“Disney has certainly enjoyed major success in China, but I’d hesitate to say that any single studio has the luxury of provoking China because it’s a very important relationship for the industry at large,” says Shawn Robbins, chief analyst at BoxOffice Media, told The Hollywood Reporter. “Virtually all of the majors have appealed to Chinese audiences with blockbuster tentpole releases and occasionally in a bigger way than some films played with domestic moviegoers.”

Disney can and should stand by its word and break this trend.

Be the rebels of your Star Wars films, Disney. Live by example. Stare down that evil Empire and stand up for all the oppressed. At home and abroad. Let your conscious be your guide.

“Our heritage and ideals, our code and standards – the things we live by and teach our children – are preserved or diminished by how freely we exchange ideas and feelings.” – Walt Disney

Editor’s Note: The opinions reflected in this OpEd do not necessarily reflect the opinions of Inside the Magic overall.