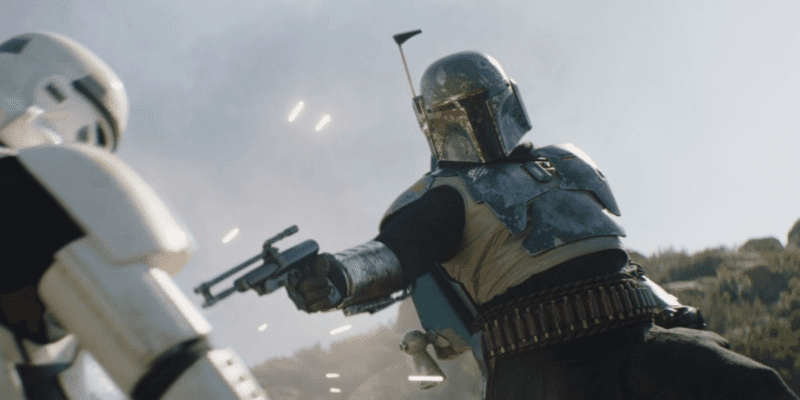 It’s an exciting time to be a Star Wars fan.

Audiences were introduced to the eponymous character Din Djarin in The Mandalorian Season 1 back in 2019, spawning a successful Season 2 last year. Now, Dave Filoni’s The Bad Batch sees the return of Star Wars‘ successful animated empire. The end of the year will see Temuera Morrison reprise his role as the famous bounty hunter, Boba Fett, in The Book of Boba Fett.

And, according to this rumor, fans may also get to see Morrison as the fan-favorite character for years to come!

Following a rather tumultuous couple of years which saw Star Wars: Episode IX – The Rise of Skywalker (2019) release into a divided fandom due to Rian Johnson’s polarizing Star Wars: Episode VIII – The Last Jedi (2017), Lucasfilm seemed to be calming the chaos with their recent television outings.

Jon Favreau’s The Mandalorian brought a new gun-slinging bounty hunter into the Star Wars universe. The Western-style series not only introduced Pedro Pascal as a new hero of the galaxy but also made his sidekick, Grogu AKA “Baby Yoda”, an international icon. But while it may be easy to forget the bounty hunters of yore due to Pascal’s shiny new character, in Season 2 fans were reminded that Din Djarin isn’t the only Mandalorian around.

The end of the season saw Fett and Shand return to Tatooine — the place of Fett’s “demise” in the sarlacc pit at the hands of Han Solo — and claim the throne at Jabba’s Palace, setting up The Mandalorian follow-up series, The Book of Boba Fett.

Not much is known about the new series apart from Morrison’s and Wen’s involvement but chances are The Book of Boba Fett could follow the bounty hunters seeking revenge of those who have wronged them — especially if Fett’s destruction of Jabba’s Palace is anything to go by.

While signs have pointed to The Book of Boba Fett being a limited series — joining the Ahsoka Tano show, Ahsoka, and Rangers of the New Republic as a potential trilogy following the events of The Mandalorian — that seems to have been called into question by the leak of a handful of images. It should be noted too, that the Disney+ series, Rangers of the New Republic, — which was set to star the fired Gina Carano (Cara Dune) — is no longer in active development. This potential opening in Star Wars‘ schedule could pave the way for the rumored Luke Skywalker spin-off series.

According to tweets from Boba Fett Fan Club (@bobafettfanclub), the upcoming Star Wars Boba Fett series is reportedly getting the multiple-season treatment from Lucasfilm. The Fan Club also shared a near-confirmed working title for The Book of Boba Fett.

#SpoilerAlert: Before we shared these rumored #TheBookOfBobaFett crew graphics, there was speculation #Buccaneer was the working title for Mando S3 even as of early December – before Boba’s show was revealed.

#SpoilerAlert: Before we shared these rumored #TheBookOfBobaFett crew graphics, there was speculation #Buccaneer was the working title for Mando S3 even as of early December – before Boba's show was revealed.

After sharing this image, a BFFC member shared something else… (1/3) pic.twitter.com/ZfeJczgShK

The rumored graphics feature three images all seemingly linked to the bounty hunter show. Most interestingly is the “Season 1” treatment underneath The Book of Boba Fett logo, hinting that the series won’t be a limited event. Despite “Buccaneer” being the rumored working name of The Mandalorian Season 3, the Boba Fett Fan Club also released images that suggest otherwise.

#SpoilerAlert: BFFC member alilmothman sent us this photo from Celebrity Marketing’s April 2021 signing with Temuera Morrison, where you can see he’s wearing a #Buccaneer sweatshirt with the same typesetting, aligning with rumored “Creature Crew” graphic.

#SpoilerAlert: BFFC member alilmothman sent us this photo from Celebrity Marketing's April 2021 signing with Temuera Morrison, where you can see he's wearing a #Buccaneer sweatshirt with the same typesetting, aligning with rumored "Creature Crew" graphic. (2/3) pic.twitter.com/M87heRPkMd

While “Buccaneer” could still be the working title of The Mandalorian Season 3 — there is a possibility that Morrison could show up in the next season — the logo link between Morrison’s jacket and the “Buccaneer” image in the first tweet suggest that at least part of the crew leak is correct. And if that is true, then we can take it on (almost) good authority that The Book of Boba Fett could be in line for multiple seasons, like its bounty hunter predecessor, based on the “Season 1” hint.

Keep in mind that neither Lucasfilm nor The Walt Disney Company hasn’t confirmed whether The Book of Boba Fett is indeed called “Buccaneer” behind-the-scenes or whether it will be receiving the multiple-season treatment. But if it does come to be true, it would seem that Boba Fett is around to stay for quite some time.

To tide you over until Star Wars‘ next live-action installments hit Disney+, catch Dave Filoni’s The Bad Batch streaming now!

What do you think about getting multiple seasons of The Book of Boba Fett? Let us know in the comments!