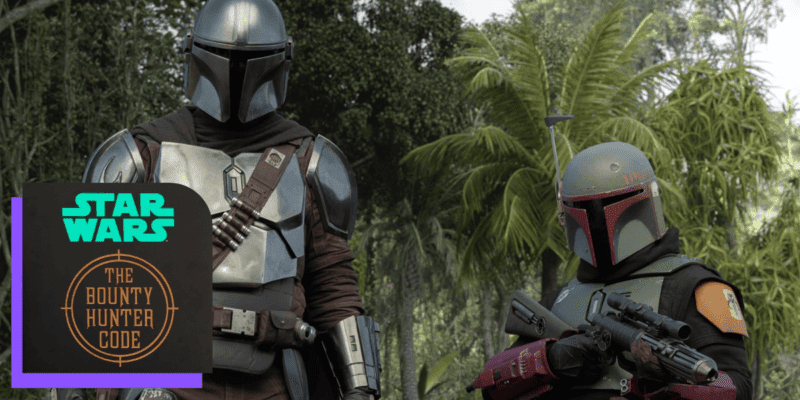 At the conclusion of The Mandalorian Season 2, while Star Wars fans were still trying to catch their breath in the wake of Luke Skywalker’s instantly iconic “hallway scene,” a post-credit stinger popped up that was nearly every bit as exhilarating. In the scene, Boba Fett (Temuera Morrison) blasts his way into Jabba the Hutt’s Tatooine palace with his new partner Fennec Shand (Ming-Na Wen). The scene closed with a title card reading, The Book of Boba Fett – officially announcing the new Boba Fett series.

Is it possible that The Book of Boba Fett is not just a slick name for The Mandalorian spinoff series? Is there a literal Book of Boba Fett in Star Wars canon? Turns out the answer is…kind of. And, it may be the key to future narratives for the clone army of Star Wars spin-off series on deck for Disney+.

There’s a thin line between good and evil. When it comes to Star Wars, the lines are blurry at best. Sure, we know that – for the most part – Jedi, good, Sith, bad. But, when it comes to bounty hunters, it’s sometimes difficult, if not impossible, to get a handle on who’s a hero and who’s a villain.

Sure, good ol’ Din Djarin (Pedro Pascal) eventually rescued Grogu (AKA Baby Yoda) from “The Client” (Werner Herzog), but only after selling Grogu’s hide for some of that sweet, shiny beskar. And, of course we all loved cheering on Boba Fett in The Mandalorian Season 2, but when audiences saw him on the big screen in Return of the Jedi (1983) they may have been rooting for the Sarlaac. I’m just saying…

Both these bounty hunter examples represent complicated, flawed heroes – neither purely altruistic nor evil – and that’s a key element of what makes these characters so compelling. Do they operate within the law or outside of it? Are they in league with the Empire, or do they survive despite it? To understand the motivations of a Star Wars bounty hunter, we can draw some conclusions from the Bounty Hunter Guild Codes.

In 2014, an official Star Wars book was released by the name of The Bounty Hunter Code: From the Files of Boba Fett by by Daniel Wallace, Ryder Windham, and Jason Fry. It details the code that all Guild bounty hunters must abide by to remain in good standing — i.e., not on the bad side of a legion of fierce hunters. The book is presented as a mash-up of two documents, assembled by Boba Fett, of The Bounty Hunters Guild Handbook and a manifesto from the Mandalorian Death Watch. The volume is said to have been found among Boba Fett’s personal effects following his supposed demise at the Pit of Carkoon. The Code demands that Guild members respect the craft of the hunt, and of the hunter – treating bounties as acquisitions while regarding themselves and other Guild members as professionals.

When it comes to sizing up the motivations of a bounty hunter, it seems it’s less about legality, good, or evil, and more about honor – and following a private coda. It’s possible that The Book of Boba Fett series could use the literal book The Bounty Hunter Code as inspiration for it’s storytelling – with a focus on the “Code” as guide rails for executive producers Dave Filoni and Jon Favreau.

The Bad Batch Connection to The Mandalorian Season 3

The Bad Batch is the next Star Wars series to debut on Disney+, making it’s debut on May 4, 2021. Audiences may learn a lot more about how the Bounty Hunter’s Guild and their code survived through all of the galactic turmoil over the decades. Fennec Shand, the aforementioned bounty hunter from The Mandalorian and The Book of Boba Fett, is set to be an animated character in The Bad Batch as well. The Bad Batch is set some 30 years prior to the events of The Mandalorian.

Inverse has floated the theory that if Shand is a bounty hunter in this earlier timeline, then audiences may get some clues about Season 3 of The Mandalorian, going so far as to call the lack of clarity presented about the Bounty Hunter’s Guild a straight-up plot hole, adding:

Here is Lucasfilm’s official synopsis of The Bad Batch:

What do you think? What missing information do you hope to learn about bounty hunters in the “The Mando-verse” spin-off series?