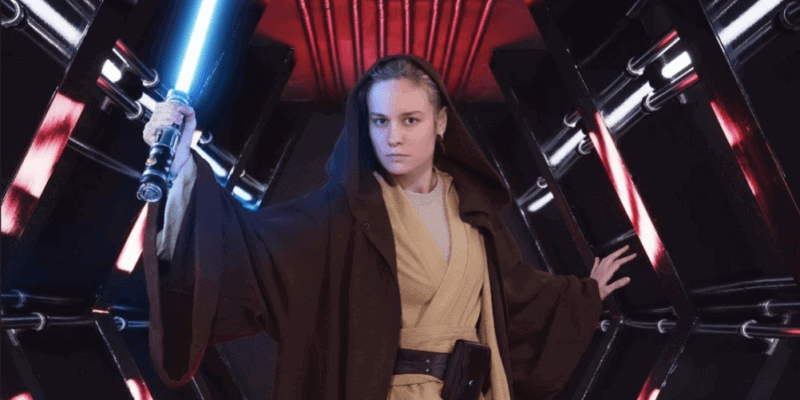 Recently, we shared details about a new report that Captain Marvel’s Brie Larson is in serious talks with Lucasfilm to play Mara Jade Skywalker in the Star Wars franchise.

The Marvel Studios Avengers actress has long expressed interest in becoming part of the Star Wars universe, so it is no surprise that she would be in consideration for the potential live-action debut of Luke Skywalker’s Star Wars Legends wife.

Now, it seems that Larson has ideas about exactly what she wants her role in the Star Wars franchise to be. Per another new report about the Marvel actress’s possible involvement in a galaxy far, far away, she wants to be the “strongest Jedi” ever.

Related: You Won’t Believe Which Female Superhero Earned the Most Cash

Given that characters like Grand Master Yoda (Frank Oz) and Jedi Master Luke Skywalker (Mark Hamill) exist, this is a big ask, if the report is to be believed.

Mara Jade is a fan-favorite character in the Expanded Universe and, given the trajectory of showrunner Jon Favreau and executive producer Dave Filoni’s Mandalorian saga, it makes perfect sense for her to be introduced into the existing Star Wars canon soon.

This, coupled with Grogu becoming Luke Skywalker’s Padawan in the Season 2 finale episode, means there’s an ideal avenue for Mara Jade to be part of The Mandalorian story. And, given how powerful the former Imperial sympathizer turns out to be in Star Wars Legends materials, Marvel Cinematic Universe actress Brie Larson just might get her wish to become the strongest Jedi…

Bear in mind that neither Lucasfilm nor The Walt Disney Company have confirmed Larson’s role in Star Wars or the introduction of Mara Jade Skywalker at this time.

What do you think? Will the Captain Marvel star get to be a powerful Jedi in Star Wars soon?

Marvel fans can watch Brie Larson as Carol Danvers in Avengers: Endgame (2019) and Captain Marvel (2019) on Disney+ anytime. Plus, catch up on Teyonah Parris as Monica Rambeau in WandaVision to gear up for Captain Marvel 2.

Star Wars fans can view both seasons of Jon Favreau and Dave Filoni’s The Mandalorian, plus Disney Gallery: The Mandalorian streaming now. Plus, catch new episodes of Star Wars: The Bad Batch every Friday.