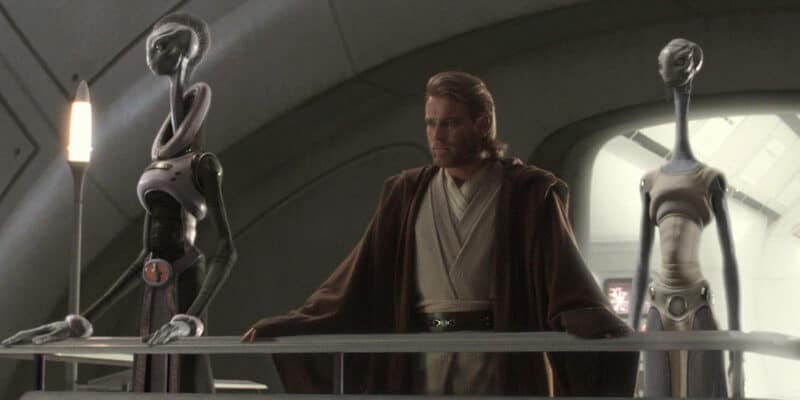 In the second prequel trilogy film, Star Wars: Episode II – Attack of the Clones (2002), we saw a grown-up version of Skywalker (Hayden Christensen) as he fell in love with Padme Amidala (Natalie Portman), starting down the path that would lead him to become Sith Lord Darth Vader.

We also met Clone Army of the Republic template Jango Fett (Temuera Morrison) — and his “son”, Boba Fett — on Kamino. Hold that thought because we’re coming right back to this.

Then, 16 years ago, in Star Wars: Episode III – Revenge of the Sith (2005), Lucas took fans on a journey that culminated with the execution of Order 66, and Kenobi and Skywalker’s epic lightsaber duel on Mustafar, before Emperor Palpatine/Darth Sidious (Ian McDiarmid) “saved” Skywalker, officially turning him into the Dark Lord of the Sith.

In Episode 15 (“Return to Kamino”), fans watched as female first-generation Jango Fett clone (told you we’d be right back to Jango) Omega (Michelle Ang) and Clone Force 99 — Hunter, Wrecker, Tech, and Echo — returned to Kamino for the first time since Governor Tarkin drove them away, following an encounter with their former compatriot, Crosshair (Dee Bradley Baker).

This installment — the first of the two-part Season 1 finale — saw Lucasfilm officially confirm that Kamino’s Tipoca City was destroyed after the planet’s cloning facilities were no longer of use to Imperial forces.

As one article noted, the destruction of Kamino’s cloning labs, and the transition to a Star Wars galaxy in which the Empire truly controls every aspect of both government operations and daily life, is a road marker, of sorts, of the true end of the prequel era:

The destruction of the Kaminoan cloning facility is symbolic, marking the end of an era. The Clone War is the thing that sets up the entire rest of the Star Wars saga. While the Republic stood for thousands of years, stability has been elusive in the galaxy ever since the Battle of Geonosis, which began the Clone Wars. Even decades after the Empire’s fall, the sequel trilogy reveals a universe still in violent turmoil…

It is, however, worth noting that this certainly isn’t the last Star Wars fans will see of clone trooper characters as The Bad Batch was recently renewed for Season 2.

We could even see some remaining clones in Deborah Chow’s upcoming Obi-Wan Kenobi special event series, which will see McGregor and Christensen reprise their prequel trilogy roles approximately 10 years after the events of Revenge of the Sith, when the Empire’s power has firmly taken hold.

Nonetheless, it seems that Lucasfilm has finally officially closed the door on the prequel trilogy era a decade-and-a-half after Revenge of the Sith introduced us to the Great Jedi Massacre onscreen. From here on out, it seems that we will be delving into a Star Wars galaxy that is, perhaps, darker than anything we’ve seen before.

What do you think? Has Star Wars officially closed the book on the prequel age?