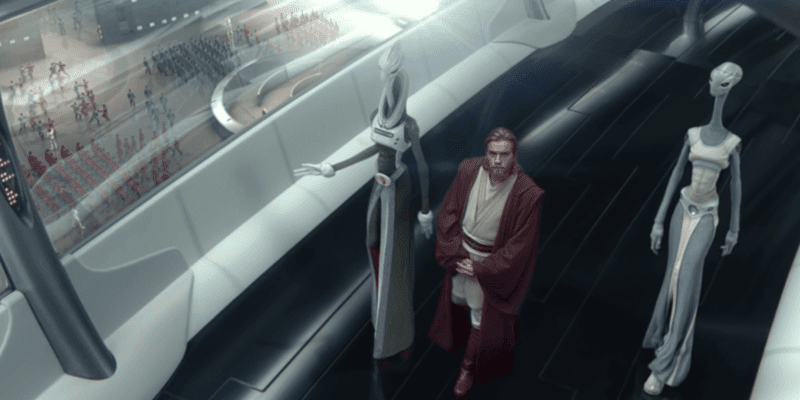 From its surprising success back in 1977 with Star Wars: Episode IV – A New Hope, Lucasfilm’s Star Wars has gone the distance, going from its original trilogy beginnings to a multi-platform franchise.

While the blockbuster outings of the Skywalker Saga speak to the overarching, key storyline of the heroic Luke Skywalker and his father Darth Vader, Lucasfilm’s television series have been telling the tales of the in-between moments, even going so as to retcon or embellish iconic events. And Star Wars just did it again.

Dave Filoni’s The Bad Batch sees the eponymous “Bad Batch”, or Clone Force 99 (Dee Bradley Baker), star as the heroes of their own story throughout a series of mercenary missions. Documenting the events immediately following Palpatine’s Order 66 execution, and thus directly crossing over with Star Wars: Episode III – Revenge of the Sith (2005), The Bad Batch has depicted this formidable crew against the backdrop of a rapidly changing galaxy.

With the Republic in ruin and the Galactic Empire now in place, Filoni’s latest animated series continues in the same vein as its predecessors — The Clone Wars, Star Wars Rebels, and Star Wars Resistance — in the way it expands upon and adds context to the greater Star Wars saga. The latter two, of course, take place post-The Bad Batch on the timeline which has allowed the Disney+ series to showcase earlier incarnations of fan-favorite characters like Hera Syndulla (Vanessa Marshall).

As it nears the end of its first season run, The Bad Batch has just been confirmed to return next year with Season 2. The series has been hurtling towards a climactic conclusion ever since it began on Star Wars Day (May 4) this year with a feature-length opener (“Aftermath”) that featured the Jedi Padawan Caleb Dume (Freddie Prinze Jr.) — the young Kanan Jarrus from Rebels.

The Bad Batch has done so much to explore the inner workings of Palpatine’s Order 66, even going so far as to confirm why the clone soldiers were so much more skilled than their successors, the stormtroopers. From their beginnings on Kamino as the clones of bounty hunter Jango Fett, the stories of the clone troopers have been explored rather incredibly in The Clone Wars, and now Star Wars has finally revealed how the clone trooper program came to its end.

SPOILERS AHEAD for The Bad Batch Episode 15, “Return to Kamino”

Kamino has been a staple part of the earlier Star Wars installments. First appearing in Star Wars: Episode II – Attack of the Clones (2002) after Jedi Knight Obi-Wan Kenobi (Ewan McGregor) followed the bounty hunter Jango Fett (Temuera Morrison) back to the planet, the Kaminoans homeworld went on to feature in The Clone Wars and now The Bad Batch.

The first part of The Bad Batch‘s two-part finale event revealed the devasting outcome of the clone trooper facility. Back at the start of the season, Filoni introduced us to Omega (Michelle Ang) who was later confirmed as being, besides Boba Fett, the only other direct genetic replication of Jango Fett. Since then, fans have been treated to nervy action sequences and plenty of easter eggs whilst on Kamino. It has also confirmed its end.

After a reunion with Crosshair, the rest of Clone Force 99, tried to escape Kamino while the Imperial fleet of Venator-class Star Destroyers opened fire on the now decommissioned cloning facility. Star Wars fans did know that Kamino became obsolete after Admiral Tarkin and the Empire diverted away from a clone army to one of Empire loyalists, but the destruction of Kamino was never confirmed. Now it has, and, as expected, fans are freaking out over this end of an era.

Star Wars used imagery to add even more emotion to this momentous episode. As the Twitter user, Aster (@UnknownAster), pointed out.

// tbb spoilers , bad batch spoilers , #thebadbatch
–
–
–
how it started how it's going pic.twitter.com/KvKFgmcTXE

Fans were quick to acknowledge that the destruction of Kaminoan facilities was the end of a big part of Star Wars history. Luis G. (@Luis_Garza) shared their feelings:

It’ [sic: it’s] so sad to think about the destruction of Kamino and with it all the memories of the clones. No one will know where they came from, their hopes, all the pain they suffered. They will forever be just traitors of the Jedi and eventually [sic: eventually] the empire and I’m not ok with that.

It' so sad to think about the destruction of Kamino and with it all the memories of the clones. No one will know where they came from, their hopes, all the pain they suffered. They will forever be just traitors of the Jedi and ecentually the empire and I'm not ok with that.

Over on Reddit, one user (OpathicalNAE), revealed it was a big moment for them.

For some reason, I’ve always loved Kamino. Always wondered what happened to it. I love the buildings, the lighting, the water, just everything about Kamino has always rocked. This ending had me tearing up over a stupid fake planet.

Out of all the deaths that Star Wars animation has shown, the “death” of Kamino is one of the ones that hurts the most. Those last few shots of the home of the Clones all barren and empty before getting blown to hell just stung. With the amount of planets that literally blow up in Star Wars, this is the first time I felt it in my gut.

We always knew the clones were decommissioned, and always knew that this time period was the end of an era, but to see it actually play out hurt more than I thought. Damn you, Filoni, you got me again

Back on Twitter and A Simple Shadow (@TheShadow_99) made a grave statement.

So Kamino was finally destroyed, now the clone wars are truly over

#TheBadBatch SPOILER
.
.
.
.
.
.
So Kamino was finally destroyed, now the
clone wars are truly over

Kamino was the birthplace of the clone army, and the exploration of these clone characters outside of the live-action Star Wars movies have allowed fans to see that the clones were more than their birthright, they had identities and morals. So this decimation of Kamino, the homeworld of all these magnificent storylines and characters, feels like a huge sad moment for the Star Wars galaxy.

That being said, as with anything Star Wars, this might not truly be the end of Kamino. We will just have to wait and see what the future holds especially if these experimental clones have anything to do with it.

Are you looking forward to the finale of The Bad Batch? Will you miss Kamino? Let us know in the comments.