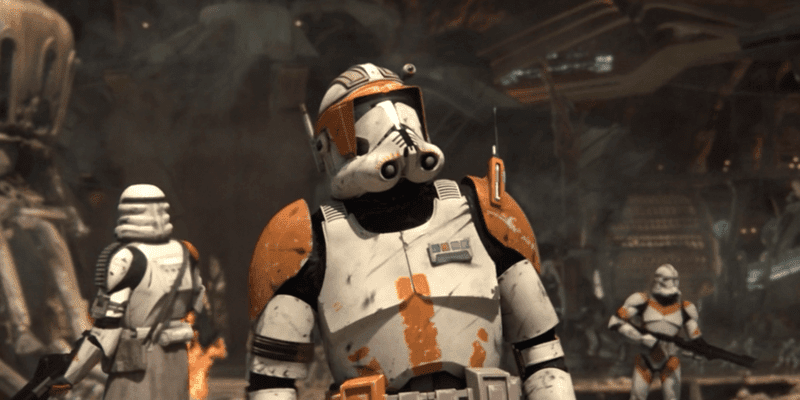 If there’s one thing that Star Wars fans are united in, it’s the seemingly poor job of the Galactic Empire’s stormtroopers. Over the years, stormtroopers have come under fire, with their blaster aim and armor, in particular, causing fans to question how strong and effective stormtroopers actually are.

This year has seen Lucasfilm provide some much-needed answers to certain aspects of the Star Wars universe, namely the orchestrations and undoing of Palpatine’s Order 66. Now, Dave Filoni’s newest animated series has finally confirmed, in canon, why the clone troopers were better than the future stormtroopers.

Premiering on Star Wars Day (May 4) this year, The Bad Batch sees Clone Force 99 take center stage as they navigate a rapidly changing galaxy in the aftermath of the Order 66 execution. Directly crossing over with the events of Star Wars: Episode III – Revenge of the Sith (2005), the first episode brought experimental clones Hunter, Tech, Echo, Wrecker, and Crosshair back into Star Wars as they experienced the birth of the Galactic Empire, even helping Jedi Padawan Caleb Dume — later Kanan Jarrus (Freddie Prinze Jr.) — to escape the clutches of the clone army.

Since its feature-length beginnings, The Bad Batch has gone further in exploring the effects and longevity of Order 66. Star Wars fans have been shown how the Jango Fett clones can still be affected by the Order 66 protocol even after the initial execution. Wrecker was seen to turn on his squadmates after repeated head trauma and complaints of head pain — the loveable brute was eventually saved after Captain Rex (Dee Bradley Baker) helped Clone Force 99 remove their inhibitor chips. It wasn’t the same story for Crosshair, however, who changed sides in the premiere after chip interference from Admiral Tarkin (Stephen Stanton).

Now, in its fourteenth episode, “War-Mantle”, Star Wars has finally addressed another one of its biggest questions — why are stormtroopers so much worse than clone troopers? We know that Palpatine’s Galactic Empire used the clone troopers as the first wave of stormtroopers and then shifted tactics, moving forward by recruiting and conscripting inhabitants of the galaxy. Later in the Skywalker Saga, in Star Wars: Episode VII – The Force Awakens (2015), we see that the First Order use abducted children and mental conditioning for the next legion of stormtroopers.

**Spoilers ahead for The Bad Batch Episode 14, “War-Mantle”**

“War-Mantle” not only reintroduced The Clone Wars and Star Wars Rebels favorite, Gregor, as the latest in a long line of returning familiar faces, it also canonically confirmed why stormtroopers were so much worse than their predecessors. After being contacted by Captain Rex with a mission to save Gregor from an Empire base. The latter reveals to Clone Force 99 that he was being kept at the base as an instructor, with The Bad Batch also showing a non-Jango Fett clone donning the famous armor.

During the escape, Clone Force 99 and Gregor easily overpower the attacking forces of the new stormtrooper conscripts leading Hunter to question Gregor’s quality of teaching. In an interesting reply, Gregor says — “I didn’t teach them everything. That wouldn’t be very smart, would it?”. The character goes on to reveal to the “Bad Batch” that their status as clones of the Republic is quickly being replaced by volunteer soldiers who swear loyalty to the Galactic Empire.

If we team Gregor’s reveal here with the idea that Star Wars is retconning a lot of what we knew about the longevity of Order 66, then it gives fans a good picture of why stormtroopers weren’t as good as clone soldiers. We saw just a couple of weeks ago that clone trooper Howzer seemingly has a mind of his own, directly disobeying the Empire’s orders and acting of his own free will, showing that the decision to replace the clones with conscripted loyalists was fundamental to the Empire’s galactic takeover.

Gregor even says — “They are not as skilled, but there’s an endless supply of them.”

Numbers aren’t everything, but we know from the original trilogy era that the Empire’s army was integral to their control of the galaxy. With “War-Mantle”, Star Wars has confirmed that the Empire favored numbers over skill — and we know from the much-explored territory of clone trooper training, that the original soldiers’ military expertise is inherent to their identities as clones. While this is a big moment in Star Wars history and in explaining the transition of power, it isn’t the first time the stormtroopers’ inferiority has been alluded to in the Star Wars canon.

In the second season episode of Filoni’s Star Wars Rebels, “Relics of the Old Republic”, Rex claps back at Kallus (David Oyelowo) by saying: “If it’s a fight you want, I hope you brought a better class of soldier than those…stormtroopers.” And in a seemingly foreshadowing moment of the latest episode of The Bad Batch, Kallus replies: “They serve the Empire well, and I have a great many of them.”

So despite Rebels alluding to their numbers as being the Empire’s strength just as The Bad Batch did recently, the latter actually offered a reason behind why the stormtroopers were never as good as their military predecessors. This reveal is just the latest in a long line of new information coming out of The Bad Batch — one of the most shocking being the confirmation that Omega (Michelle Ang) is actually the sister of iconic bounty hunter, Boba Fett.

Do you think The Bad Batch is doing a good job at filling in the gaps of Star Wars history? Let us know in the comments!