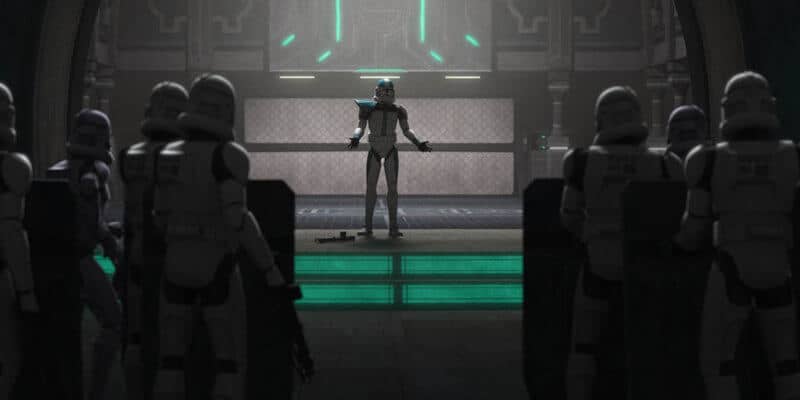 Dave Filoni’s latest foray into the Star Wars universe, animated series Star Wars: The Bad Batch, has been exploring clone troopers since day one. This makes sense, given that the Star Wars: The Clone Wars spinoff series follows the post-Order 66 exploits of Clone Force 99, an elite squad of “defective” clones with enhanced abilities.

During the first episode of the series (“The Aftermath”), Hunter, Wrecker, Tech, Echo, and Crosshair watched in horror as their fellow clone troopers suddenly turned on the Jedi Generals they had faithfully served for years, murdering them seemingly in cold blood.

After seeing General Depa Billaba (Archie Panjabi) killed right before his eyes, and before he had the slightest idea what Emperor Palpatine’s Order 66 even was, Hunter helped her Padawan Caleb Dume — later Kanan Jarrus (Freddie Prinze, Jr.) in Star Wars Rebels — escape from planet Kaller.

After an encounter with Clone Wars fan-favorite Captain Rex (Dee Bradley Baker), and a touch-and-go situation with Wrecker’s malfunctioning inhibitor chip, all of the Clone Force 99 troopers have their chips removed in an abandoned Jedi cruiser on Bracca — using the same type of medical equipment that Ahsoka Tano (Ashley Eckstein) used to free Rex from hs chip.

Thus, it makes sense that they are no longer remotely impacted by the ramifications of the Order 66 directive. However, as we’ve learned over the past two weeks in Episode 11 (“Devil’s Deal”) and Episode 12 (“Rescue on Ryloth”), everything we knew about clone troopers in a post-Order 66 world may be wrong.

Howzer — who has clearly worked closely with Hera Syndulla’s (Vanessa Marshall) father Cham Syndulla (Robin Atkin Downes) — is a clone trooper with a mind of his own. In just two episodes, he has blatantly disobeyed Imperial orders and has openly questioned decisions being made by the Empire.

If you’ve only seen the live-action Star Wars projects – including The Mandalorian — you would have no idea that any clones were even harboring a shred of human decency. In fact, the visual evidence presented by Revenge of Sith suggests just the opposite: Yoda beheads clones and later stabs one through the chest. In the film, after Order 66 is issued, it seems clear clones are mindless killers who can’t be trusted.

The twelfth episode of The Bad Batch, though, reversed everything the existing Star Wars canon has taught us about clone troopers. When Howzer refuses to target Ryloth civilians and ignores a direct order, he proves that it’s not only clones without inhibitor chips who are thinking for themselves.

Then, as Inverse’s article noted, “about half of the regular clone battalion also lays down arms and refuses to follow what they see as unethical Imperial orders.”

Given Crosshair’s sudden loyalty to the Empire — seemingly as a result of his inhibitor chip — it initially seemed as though Dave Filoni and his team were setting up a narrative that the chips not only caused clones to carry out the Order 66 directive but that they would then have unquestioning loyalty to Imperial forces.

Not so, however. Episode 12 changed everything, proving that, as Inverse pointed out, “clones have a diverse array of personalities, chipped or not, which explains why some side with Howser and others don’t. Instead of mindless killing machines, clones are laying out their own codes of conduct.”

This retcon could prove to majorly change how clone troopers behave in future projects within the Star Wars franchise, particularly with other post-Order 66 projects — like Temuera Morrison’s The Book of Boba Fett and Hayden Christensen and Ewan McGregor’s Obi-Wan Kenobi — in production right now.

What do you think about this Order 66 retcon? Do you like that Star Wars fans are starting to see clones in a new light?