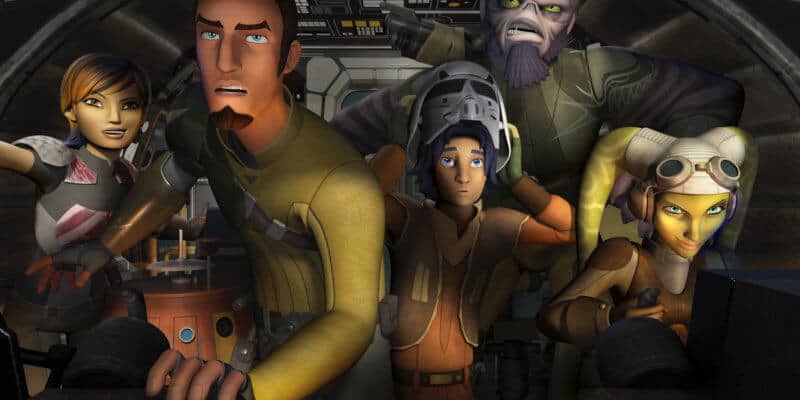 Hera and female Jango Fett clone, Omega (Michelle Ang), became fast friends in the brief scene they shared together during one of Clone Force 99’s mercenary missions for Cid (Rhea Perlman) — a mission that saw Hunter, Wrecker, Tech, and Echo delivering arms to Twi’Lek Gobi Glie (Corey Burton) during the earliest days of the Rebellion.

While we’re likely to see Hera and her parents, Cham Syndulla (Robin Atkin Downes) and Eleni Syndulla (Ferelith Young), — and new fan-favorite clone trooper Howzer (Dee Bradley Baker), too — in The Bad Batch, Episode 12 (“Rescue on Ryloth”), the real question is when Hera and the rest of her Rebels crew will be making their live-action debuts.

Live-action Ahsoka Tano actress Rosario Dawson even hinted that Wren would show up in spinoff show, Ahsoka. But, what if we see the Ghost ship crew even sooner than we expected?

As one podcast recently pointed out, it would actually make a lot of sense for Hera Syndulla to make her live-action debut in Andor, which is currently filming across the pond in the United Kingdom.

Due to Andor’s place in the Star Wars timeline, it is highly unlikely that other Rogue One characters — including Erso, Chirrut Imwe (Donnie Yen), and Baze Malbus (Jiang Wen) — will appear.

Furthermore, Alan Tudyk has confirmed that his fan-favorite droid K-2SO will not appear in the first season of the upcoming Star Wars show.

All of this, though, opens the door for the Ghost crew to land in Andor. Den of Geek perfectly explained how Rebels and Rogue One relate in the timeline:

Almost all of Rebels is set between 5 BBY (Before the Battle of Yavin) and 0 BBY — right before Rogue One and A New Hope — with each season covering about a year in the lives of the characters. To put it another way, Rebels begins 14 years after the end of The Clone Wars, which is set from 22 BBY to 19 BBY.

This means, essentially, that Andor will take place at the beginning of Rebels — essentially at the start of Star Wars Rebels Season 1 –, setting the stage for the Rebel spy to meet up with the Ghost’s crew in some capacity or another.

Not only would this be the best type of fan service, but it would allow live-action Rebels characters to more easily return in The Mandalorian saga without a lot of setup on Favreau and Filoni’s part.

Additionally, since it’s unlikely that Andor will bring back other familiar characters, introducing Rebels fan-favorites in live-action could go a long way toward drumming up excitement for the 2022 series, which is currently significantly less exciting to fans than other upcoming shows, such as Ewan McGregor and Hayden Christensen’s Obi-Wan Kenobi, and, of course, the first Mandalorian spinoff, The Book of Boba Fett.

What do you think? Will we first meet the live-action Rebels crew in Andor, or in The Mandalorian Season 3 or Ahsoka, which could be a Rebels sequel series?