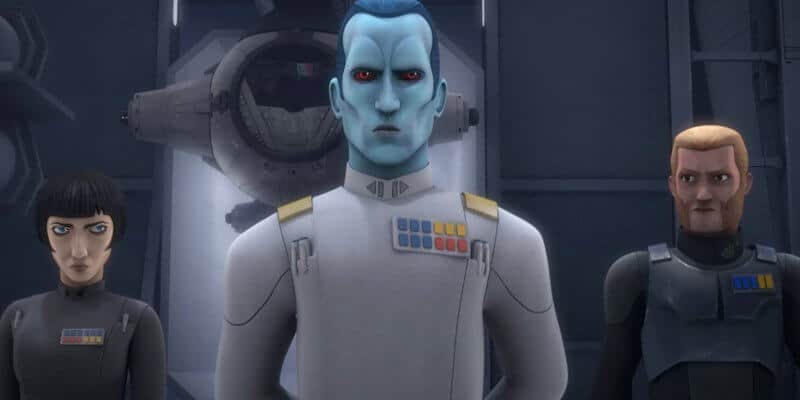 During The Mandalorian Season 2, showrunner Jon Favreau and executive producer Dave Filoni set up a lot of avenues for the future of their little corner of the Star Wars universe.

From the introduction of Temuera Morrison’s Boba Fett — the version of the original trilogy bounty hunter many fans have been waiting for for 40 years — to Rosario Dawson’s live-action Ahsoka Tano finally explaining Grogu’s backstory, a number of potential story arcs were teased.

Perhaps the biggest surprise of the entire season, though — except for that Jedi Knight Luke Skywalker (CGI Mark Hamill) cameo in the finale episode — came in Episode 5 (“Chapter 13: The Jedi”). This was Tano’s episode, directed by Filoni himself, and it didn’t disappoint.

After titular Mandalorian Din Djarin (Pedro Pascal) teams up with Tano against all odds — as he says, “A Mandalorian and a Jedi? They’ll never see it coming.” —  to defeat Corvus Magistrate Morgan Elsbeth (Diana Lee Inosanto), Elsbeth confirms that she’s not the one pulling the strings after all.

Now, it seems that the live-action version of the famous blue-skinned villain may have been cast months ago, though no official announcement regarding who will play him has been made.

Per a recent report about upcoming cameos in Mandalorian spinoff series, The Book of Boba Fett:

Not only are we getting Din, Luke, and Grogu in The Book of Boba Fett, but Thrawn is coming as well.

With the addition of all these characters, what are they building towards with this? Adding Thrawn, Luke, Grogu, Din Djarin, and more, how does it all fit? Thrawn is a “Thanos” level villain for Star Wars fans out there. He’s not just someone you throw into a story. If he’s being added, that means we’re getting an entire arc built around his character. In the power vacuum between The Empire and the First Order, someone has to step in and fill the Emperor’s shoes.

Again, it is, of course, important to note that this report — which also asserts that Timothy Olyphant’s Mos Pelgo Marshal Cobb Vanth is returning in The Book of Book Fett — is unconfirmed by Lucasfilm or Disney at this time.

However, what’s most interesting here is that The Book of Boba Fett has already wrapped filming. This has been confirmed by both lead actor Morrison and Ming-Na Wen, who plays sharpshooter Fennec Shand.

If, in fact, Thrawn’s live-action introduction comes in The Book of Boba Fett and not in another upcoming series, Ahsoka, this means that the character has already been cast for months without a single leak hitting the internet — an impressive feat, but Favreau and Filoni have done it before.

Rumors have swirled about who will play the villainous Thrawn and names like Benedict Cumberbatch (Doctor Strange in the MCU) and Robert Downey, Jr. (Tony Stark/Iron Man in the MCU) have been mentioned. At one point, it was even rumored that Rebels voice actor Lars Mikkelsen would play the character in live-action, much like Katee Sackhoff was cast as Bo-Katan Kryze.

Thrawn, of course, first entered into the existing Star Wars canon in Filoni’s animated series, Star Wars Rebels. He antagonized the Ghost ship crew, including Tano’s fellow Jedi Knight Ezra Bridger (voiced by Taylor Gray) — and the rest of the galaxy — until Bridger sacrificed himself to make sure Thrawn disappeared.

What do you think? Who will play Grand Admiral Thrawn — and has the actor already filmed his first Star Wars series for Disney+?