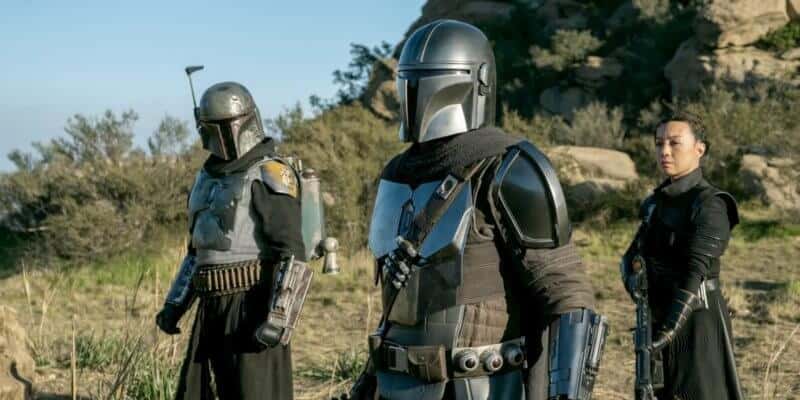 New Zealand-born actor Temuera Morrison first appeared in the Star Wars story as Jango Fett in Star Wars: Episode II – Attack of the Clones (2002). Fett, as most Star Wars fans already know, served as the DNA template for the Clone Army of the Republic.

Near the end of the Separatist Crisis, Jedi Knight Obi-Wan Kenobi traveled to the planet Kamino on a mission to investigate who was involved and responsible for the plot to assassinate Senator Padmé Amidala of Naboo.

Kenobi discovered the clones and ultimately dueled Jango Fett as he attempted to escape from Kamino on the now-iconic starship, Slave I. After a duel with Kenobi, Fett did manage to get away with his son in tow. As a condition of giving up his DNA for the Republic’s cause, Fett had been allowed to keep one clone to raise as a son.

After Jeremy Bulloch originally played the bounty hunter character in the Star Wars original trilogy — Episode V: The Empire Strikes Back (1980) and Episode VI: Return of the Jedi (1983) — Morrison made the character’s triumphant return (he’s a clone, remember?) in The Mandalorian Season 2, alongside new fan-favorites like Grogu (AKA “Baby Yoda”) and, another bounty hunter, Din Djarin (Pedro Pascal).

Now, Star Wars fans are about to see Boba Fett come back to the Star Wars franchise again, this time in his very own series.

Morrison recently confirmed in an interview with SFX magazine that The Book of Boba Fett has finished filming — Fennec Shand actress Ming-Na Wen also indicated this on Twitter — and it took a very long time, presumably thanks to showrunner Jon Favreau and executive producer Dave Filoni’s perfectionistic tendencies.

A new report notes, “Temuera Morrison has returned to his home town of Rotorua, New Zealand, after 7 months of filming”.

To put things in perspective, IMDb confirms that The Book of Boba Fett will have seven episodes — the first two seasons of The Mandalorian both had eight — and an average network television series takes nine to 10 months to film a full 22-episode slate.

This means that it took three times longer to film The Book of Boba Fett than an average series! This could, in part, be due to the use of the elaborate The Volume soundstage, which truly brings the Star Wars universe to life in Favreau and Filoni’s shows.

However, it also speaks to the fact that the duo is likely working hard behind the scenes to ensure that the series is as perfect as possible for the Star Wars fan community. Filoni, for example, was said to be “pulling his hair out” to make sure The Mandalorian Season 2, Episode 5 (“Chapter 13: The Jedi”) was a “masterpiece”.

As far as what we know about the upcoming Star Wars series, which will debut on Disney+ in December 2021, details are scarce. Morrison will reprise as Fett and Wen will reprise as Shand, but beyond that, everything is speculation at this point — just the way Favreau and Filoni like it (remember Mark Hamill’s Luke Skywalker cameo that was kept secret for a year?).

Although we don’t know which other original trilogy or Mandalorian characters are going to appear in The Book of Boba Fett — in addition to Djarin and Vanth, young Han Solo (Alden Ehrenreich), Greef Karga (Carl Weathers), and Moff Gideon (Giancarlo Esposito) are possibilities — there is little doubt that the series will be well worth the wait.

What do you think about how long it took to film the Boba Fett series? What are your biggest hopes for the long-awaited Boba Fett spinoff?