'Bad Batch' And Clone Force 99 Explained - Inside the Magic 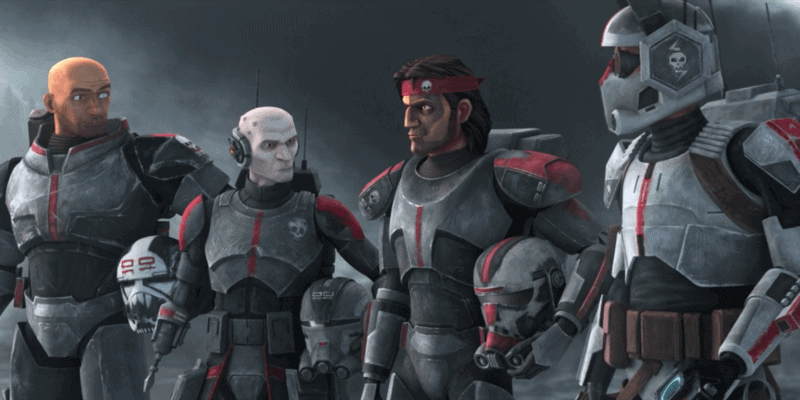 You may know them as Clone Force 99 or as the “Bad Batch”, but one thing is for sure, the elite clones are currently changing the face of the Star Wars galaxy.

You may even be wondering “What is Clone Force 99?”

How was Clone Force 99 formed?

Clone Force 99, or the “Bad Batch”, is a squad of genetically modified clone troopers. Deviating from the traditional Jango Fett model, each member of Clone Force 99 has a unique mutation that helped coin the term, “Bad Batch”.

Originally only four members, the enhanced squad were named after 99 — another mutation of the original clone model who died in defense of Kamino during a Separatist attack. Each member has a desirable enhancement making them superior to the regular clone trooper army, leading to them taking on a series of mercenary missions.

The “Bad Batch” squad was able to bypass Chancellor Palpatine’s Order 66 protocol due to their genetic mutations — this means their inhibitor chips failed to comply like the rest of the clones. Despite not being under the control of Order 66, one of their members — Crosshair — decided they should still follow orders and execute the Jedi.

In the premiere of Filoni’s Disney+ show, Hunter is seen letting a young Kanan Jarrus — the Jedi Padawan, Caleb Dume — escape the clone trooper attack. This would go on to have repercussions for Clone Force 99 after Crosshair’s chip is activated by Admiral Tarkin, leading to a galactic pursuit to capture the defecting clone squad. The group’s members are some of the most interesting Star Wars characters.

Who was the first clone trooper?

While the Kaminoans developed clones at an exponential rate in order to satisfy the needs of the Republic army, the first clone ever made from Jango Fett’s genetics was his “son”, Boba Fett. In exchange for a large sum of money and that the first clone made was his to keep, Jango Fett not only became the template for the clone troopers, but also the “father” to one of the future’s most feared bounty hunters.

Who are the members of the Clone Force 99 team?

Beginning as just four members, Clone Force 99 now features — Clone Sergeant Hunter, Wrecker, Tech, CT-9904 AKA Crosshair, and CT-1409 AKA Echo. Although Crosshair is currently on the opposing side with the Galactic Empire, the “Bad Batch” has recently taken in another genetically mutated clone in the form of Omega.

What is the purpose of Clone Force 99?

Clone Force 99 are elite warriors, helped by their mutations. In battle, the squad has a unique bond that has given them a 100% mission success rate. With more autonomy than regular clone troopers due to their genetic enhancements, the squad uses both their innate skill and tactics to help turn the tide of war.

The “Bad Batch” squad is led by the clone commando sergeant, Hunter. The commanding officer of Clone Force 99 is both an adept leader, shown during the assault on the Separatist Cyber Center on Anaxes, as well as a force of empathy and reason, like with his saving of both Caleb Dume and Omega.

What types of spaceships does Clone Force 99 use?

Han Solo has the Millennium Falcon, Din Djarin has the Razor Crest, Clone Force 99 has the Havoc Marauder. Just like they are modified clones, their starship was also enhanced — the squad uses an Omnicron-class attack shuttle. The attack shuttle was a key component during the Clone War.

What types of genetic modifications do the members of Clone Force 99 possess?

Each member of the squad has their own genetic modifications, with each playing a key role in the success of their missions.

Hunter has enhanced senses and is an expert tracker. The squad leader is able to sense electromagnetic fluctuations meaning he is a valuable asset in battling the Separatist‘s droid army.

Crosshair is a skilled marksman and sharpshooter known for giving Clone Force 99 their long-range advantages on the battlefield.

Wrecker is the muscle of the squad. He is physically enhanced more so than the other clones and is often used as the brute force element of the squad. While he is not invincible by any means, his power can often sway the fight.

Tech uses his smarts rather than traditional gun-to-gun warfare. The character is brilliantly clever, with a keen eye for figuring the squad‘s way out of sticky situations using his technical expertise.

Echo, while not modified in the same way as the rest of his brothers, possesses the unique ability to understand complex data as well as droid interfaces. The experimentations performed on him by the Techno-Union left him more cybernetic than clone trooper.

What weapons do the members of Clone Force 99 use?

As members of the Clone Army during the fall of the Republic and the rise of the Galactic Empire, the “Bad Batch” use standard-issue firearms, like the DC-17m blasters, but the unique squad is known to improvise on their missions.

Where Clone Force 99 has appeared

When was the first appearance of Clone Force 99?

As StarWars.com states, the first appearance of the genetically enhanced squad came in the final season of George Lucas’s The Clone Wars.

The Clone Wars were close to an end when Captain Rex first crossed paths with the motley crew. When the battle on Anaxes took a turn for the worse, Rex couldn’t shake the feeling that the droid army might be using the intel of an old friend, Echo. Commander Cody called in Clone Force 99 to help them infiltrate the cyber center that held the secret to the Separatists’ strategy.

What other shows have Clone Force 99 appeared in?

With their beginnings in The Clone Wars, Clone Force 99 now stars in their own animated Star Wars series, Filoni’s The Bad Batch, which streams exclusively on Disney+ on Fridays. The series began on Star Wars Day (May 4) 2021 with a feature-length premiere episode called “Aftermath”. It is the second Star Wars Original series following The Mandalorian.

What does the future hold for Clone Force 99?

With The Bad Batch crossing over with the end of the prequel trilogy and taking place before the original trilogy in the Star Wars timeline, fans have already seen the future of the galaxy from this point forward. But what Filoni is doing is adding context to Palpatine’s Order 66 while also setting up a reveal to the big mystery of — who, or what is Omega?

Clone Force 99 is sure to be fighting the forces of the Empire for the time being while the heroes try to navigate this rapidly changing galaxy.

With the pressure building ever since The Bad Batch premiere, it sure is an exciting time for the formidable crew of experimental clones and Lucasfilm‘s Star Wars universe.

Who is your favorite member of Clone Force 99?

Comments Off on ‘Bad Batch’ And Clone Force 99 Explained