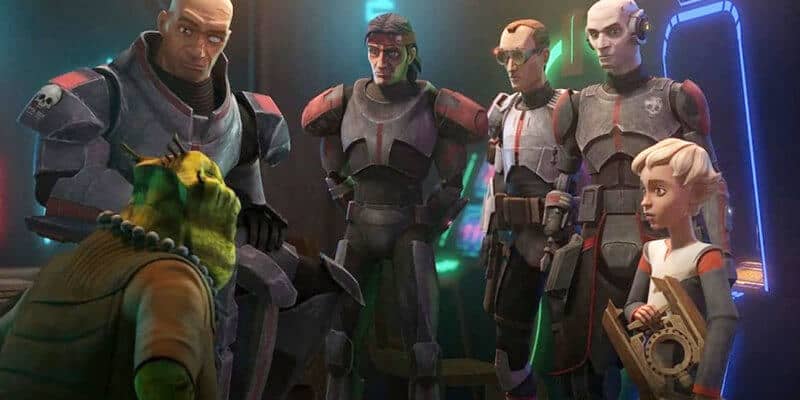 It was recently announced that, due to the overwhelming success of Marvel Studios’ Loki series’ Wednesday, June 9 debut, all Disney+ Original Series will now release on Wednesdays. This is a move from the streaming platform’s previous Friday releases for all Disney+ Originals, including The Mandalorian, The Falcon and the Winter Soldier, and WandaVision.

Since we know that all Lucasfilm and Marvel Studios shows from now on will be impacted by this change, one of the biggest questions for Star Wars fans is whether or not Star Wars: The Bad Batch will be moving to Wednesdays from its current Friday release schedule.

The answer, seemingly, is no. It appears that Dave Filoni’s latest Star Wars animated series — which follows the adventures of clone trooper squad, Clone Force 99 — will continue airing on Fridays until the end of the season.

The series, which debuted on May 4 (Star Wars Day), is nearing its midseason point.

During its first seven episodes, The Bad Batch has followed the adventures of Hunter, Echo, Tech, Wrecker, and young female clone, Omega in a rapidly changing galaxy.

Clone Force 99 member Crosshair joined the Galactic Empire in the wake of Emperor Palpatine’s Order 66 and his former compatriots have found themselves running from Governor Tarkin, ultimately joining forces with information broker, Cid (Rhea Perlman), who is currently sending the team on mercenary missions from her base on Pantora.

We’ve also been reintroduced to Star Wars: The Clone Wars and Star Wars Rebels fan-favorites like the Martez sisters — Trace and Rafa — and, of course, Captain Rex (Dee Bradley Baker).

For now, it seems that fans can continue enjoying the first season of The Bad Batch to get their weekends off to a great start. It is not yet known if there will be future seasons of Filoni’s latest animated endeavor and, if there is a Season 2, what day of the week it will air.

The official description of Star Wars: The Bad Batch reads simply, “The Bad Batch must find their way in a rapidly changing galaxy.”

Are you glad The Bad Batch is still airing on Fridays

Comments Off on Is Disney Moving ‘Star Wars: The Bad Batch’ to Wednesdays?