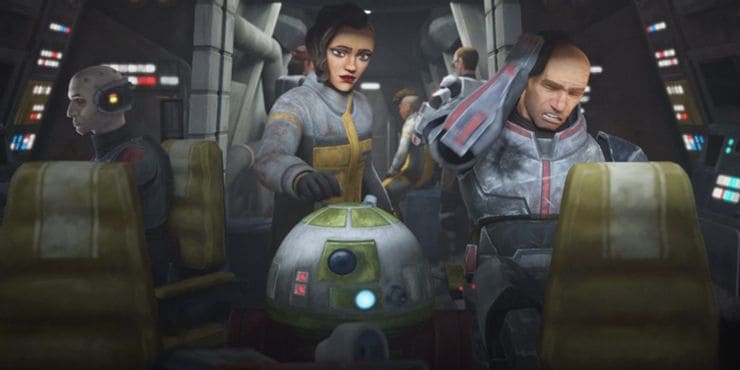 **SPOILERS Ahead For The Bad Batch Episode 6**

As Hunter notes early in the episode, even this soon after Emperor Palpatine’s takeover — thanks to the execution of Order 66 — the “price of knowing how to defeat them [Imperial forces] has gone up”, making the clone trooper squad’s second mercenary mission hugely important.

While on Corellia, Clone Force 99 discovers they aren’t the only ones after the last remaining tactical droid’s head. Two familiar Star Wars: The Clone Wars characters, Trace and Rafa Martez, are also in pursuit.

The Martez sisters were first introduced in the Clone Wars Season 7, at the beginning of the story arc known as “Ahsoka’s Journey”. Although Rafa and Trace strongly dislike the Jedi Order, they ultimately take in Ahsoka Tano (voiced by Ashley Eckstein) when she leaves the Jedi.

The sisters lost their parents during a Jedi mission in which bounty hunter Cad Bane had been fleeing from the Order.

Bane shot at a transport ship, knocking it off course. An unknown Jedi pilot, believed by many to be Luminara Unduli, was able to steer the transport vessel away from a platform where numerous civilians were standing but allowed it to crash into the lower-level apartment building where it ultimately killed the Martez parents and others, so their feelings are understandable.

Now, though, it seems that Rafa and Trace might be taking care of Ahsoka’s former droid, R7-A7 — or are they?

In The Bad Batch, the sisters’ Astromech droid unit certainly appears to be the same one that Ahsoka and Captain Rex (Dee Bradley Baker) managed to salvage when they escaped from their ship — which was carrying Maul to Coruscant — during Order 66.

The fact that the Martez sisters’ unit is even called “R7” seemingly confirms they somehow obtained Ahsoka’s companion for safekeeping.

But, as CBR — and a number of Star Wars fans — have already pointed out, this droid may not actually be Ahsoka’s and there could be a fairly major animation error in “Decommisioned”:

However, while it initially appeared to have the same color scheme as Ashoka’s dear friend, a small error appears to confirm it’s not the same droid. A later view of the astromech reveals that it’s actually silver with gold and green accents, not red and gold. The two views, which are less than five minutes apart in the episode, show clearly different colorations and constitute an undeniable continuity error.

With the error in mind, it seems unlikely that this R7 used to be Ahsoka’s droid. And on top of everything, it would be a questionable course of action for Ahsoka to have repaired her droid, reached out to the Martez sisters and emerged from hiding so soon after Order 66.

It is worth noting that it’s unlike Dave Filoni and his team to make a mistake like this, but stranger things have certainly happened — we still don’t know why Chewbacca didn’t get a medal in George Lucas’s first Star Wars movie, A New Hope (1977), after all — but, it is possible that this particular R7 droid will be explained down the line.

If, however, there is a continuity error, it could greatly alter who the Martez sisters were speaking to at the end of The Bad Batch Episode 6. If the droid is, in fact, Ahsoka’s, it would make sense that they were calling her, since they would have obviously already had communication with Anakin Skywalker’s former Padawan after the Jedi Purge.

As it stands, however, Rafa and Trace could be in communication with Crimson Dawn and Maul, Bail Organa, or any other number of popular characters within the Star Wars galaxy…

What do you think? Is this Ahsoka’s R7-A7 or is there an animation error?