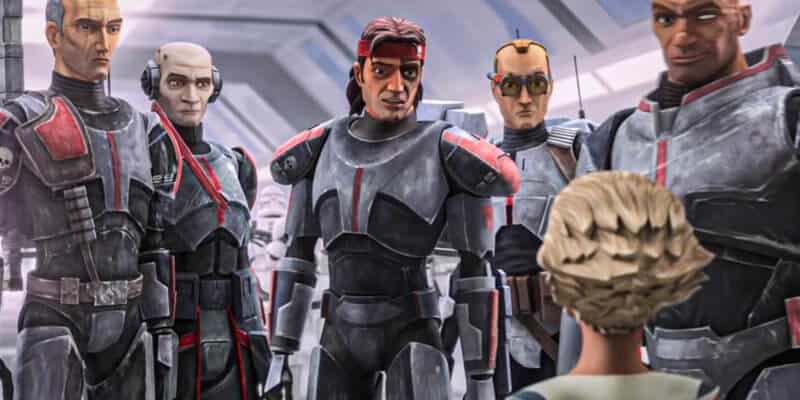 The Star Wars universe has always aimed to tell a cohesive story through its various movies and television shows, not to mention the comics and novels that do a good job of filling in any gaps. When Chancellor Palpatine executed Order 66 in George Lucas’s Star Wars: Episode III – Revenge of the Sith (2005), it seemed like the catastrophic event was a done deal — that there was, essentially, a time when clone troopers were “good” and a time when they weren’t.

Dave Filoni’s latest foray into Star Wars animation tells a different story — or, let’s say, expands upon the Order 66 protocol — and shows how a certain fan-favorite squad copes with the aftermath of such a galaxy-altering incident. And maybe hints that they won’t survive it after all…

Star Wars: The Bad Batch is a new television show which debuted on May The Fourth AKA Star Wars Day this year. Produced by Josh Rimes, the Disney+ streamer tells the story of Clone Force 99, or the Bad Batch, and the events immediately following Palpatine’s execution of Order 66 — or, to put it bluntly, the execution of the Jedi Order by the clone army. Filoni’s newest addition to the canon universe joins The Clone Wars, Star Wars Rebels, and Star Wars Resistance in Star Wars‘ animated world.

The team — which is made up of Hunter, Crosshair, Tech, Echo, and Wrecker — are all genetically mutated clones made on Kamino alongside their clone trooper brothers using the bounty hunter, Jango Fett — Boba Fett’s father. All of the mercenary squad is voiced by The Clone Wars‘ alum, Dee Bradley Baker, with Michelle Ang joining him to voice Omega — another Kamino clone deviant and the honorable sixth member of the Bad Batch.

Star Wars‘ latest foray into the television world, and newest animated series, is attempting to shine a light on previously undocumented events within the Star Wars universe. Where The Mandalorian explored a world after the fall of the Galactic Empire, The Bad Batch is showcasing its rise through a series of thrilling, adventure-filled mercenary missions. Lucasfilm’s groundbreaking storytellers are also providing new information on Star Wars‘ Order 66, and the army of clone soldiers it affects.

Let’s first go back to Episode 1, aptly titled “Aftermath”. The feature-length season premiere dealt with the sequence of events after Palpatine uttered the words that changed the Star Wars universe forever. Fans saw Caleb Dume, who grew up to become Jedi Master Kanan Jarrus, survive the massacre as the Bad Batch navigated a terrifying new world. Unfortunately, it wouldn’t take long for the experimental clones to be torn apart, as the ending saw Crosshair’s inhibitor chip altered by Admiral Tarkin, making him turn against his squadmates.

While the Bad Batch gained Omega into their ranks following the battle on Kamino and the subsequent loss of Crosshair, the latest episode, “Decommissioned”, proves Star Wars could tear apart the Bad Batch one by one.

Spoilers ahead for The Bad Batch episode 6, “Decommissioned”

In this week’s episode of The Bad Batch, Clone Force 99 must retrieve a Separatist tactical droid for Cid (Rhea Perlman) — a former Jedi informant — on Corellia. As with any of Lucasfilm’s Star Wars outings, things do not go to plan. The squad aren’t the only ones after the droid. Returning Clone Wars characters and familiar faces, Trace and Rafa Martez, are also trying to secure the bounty — although, for whom, we don’t know. During the skirmish at the factory, there is actually another, more sinister, incident that happens — and this could be what tears the Bad Batch apart.

While trying to save his squadmates, Wrecker jumps to a platform and as he lands slams his head into the mechanism. Wrecker falls to the ground and not much later begins to mutter Crosshair’s catchphrase — “Good soldiers follow orders “, over and over again while both Hunter and Omega try to contact him via comlink. Wrecker’s words show that the devastating Order 66 wasn’t just a one-time event and that the insidious protocol to destroy the Jedi Order and follow Palpatine’s command could happen at any time — this was clearly a blip in his control over himself.

It also isn’t the first time that Wrecker has had head trauma. The character is often complaining of headaches and theories state that this could be a sign pointing to Wrecker’s transition from the loveable clone to a brutal force of evil — like after Tarkin’s interference with Crosshair. That being said, while Wrecker’s transition is being heavily foreshadowed, his fellow squadmate, Tech, has been seen to be working on a new device to help the Bad Batch combat any potential inhibitor chip issues. And this could be a major one.

While the Bad Batch could be torn apart (again) over Wrecker’s loss of control, it might not necessarily mean that Clone Force 99 will be completely over, but it will mean that they won’t be the same group that entered the Star Wars universe in The Clone Wars.

No, if Wrecker joins Crosshair in Tarkin’s and Palpatine’s Galactic Empire, the Bad Batch will never be the same again.

Do you think the time is up for the Bad Batch?