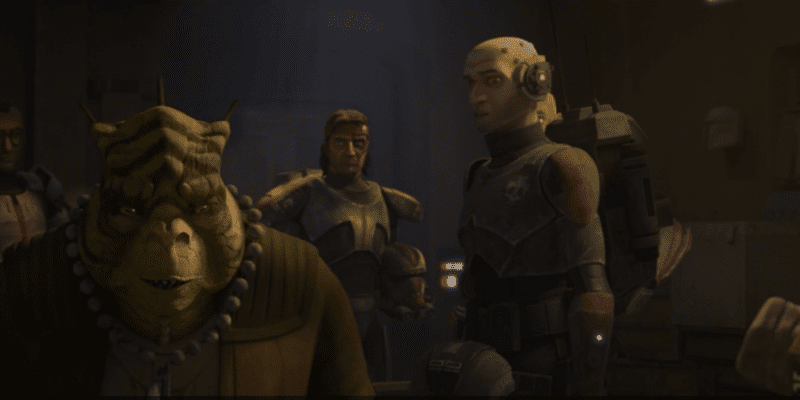 Dave Filoni’s latest Disney+ Original animated series, Star Wars: The Bad Batch, has transported Star Wars fans to an era that has not previously been explored in the existing Star Wars canon.

For the first time, fans are really getting a glimpse of what happened just after Emperor Palpatine executed Order 66 — the tragic event in which clone troopers’ inhibitor chips forced them to turn on Jedi Generals like Depa Billaba, who they had faithfully served for years in the Clone Army of the Republic.

This “sudden, shocking” transition from Republic to Galactic Empire ended the Clone Wars but ushered in an entirely new era that saw Clone Force 99 — Hunter, Wrecker, Tech, Echo, and Crosshair — more-or-less run off of Kamino after refusing to complete a mission for Governor Tarkin.

When Episode 5 (“Rampage”) picks up, the team (all voiced by Dee Bradley Baker) — without new Imperial officer Crosshair and with female clone Omega — arrives on Ord Mantell to meet with Cid (Rhea Perlman), a Trandoshan informant who provided classified details to the Jedi Order during the war years.

In a blink-and-you-miss-it moment, Filoni and his team teased the return of a fan-favorite bounty hunter during an era in which we’ve never seen him. In the above image, you can see a white Mandalorian beskar helmet on the wall of Cid’s office behind clone troopers, Wrecker and Hunter.

That helmet is no accident — it’s the original beskar armor worn by Boba Fett (Jeremy Bulloch/Temuera Morrison). When famous Star Wars artist Ralph McQuarrie created the concept art for Episode V – The Empire Strikes Back (1980), Fett was supposed to be an Imperial “super trooper”.

Eventually, George Lucas nixed the idea and Fett’s iconic worn-in green Mandalorian armor was born. However, Fett’s white armor was used during some test filming and there has been some merchandise featuring the white armor released over the years, including a Hasbro Star Wars The Black Series figure.

That said, we’ve never seen Fett during these post-Clone Wars, pre-original trilogy years. While it’s certainly possible that Filoni and his team simply included the white helmet as a fun Easter egg for longtime Boba Fett fans, it’s equally plausible that Fett will make an appearance in The Bad Batch.

We know little about the popular bounty hunter’s life between Episode II – Attack of the Clones (2002) when he was a child on Kamino and his famous Sarlaac pit scene in Empire Strikes Back.

With The Mandalorian spinoff series, The Book of Boba Fett, set to debut in December 2021, this is the perfect time to get fans excited about Fett — and to provide more backstory about the legendary Star Wars character. Plus, The Bad Batch has already given us an animated version of Fennec Shand (Ming-Na Wen) who is Fett’s right-hand woman during the post-Return of the Jedi Mandalorian years.

With the rise of the Empire and the clone legacy of his father Jango [Jango Fett, the clone trooper DNA template] being phased out, what would his reaction be? Likewise, fans have yet to see the first time Boba donned his father’s armor in the Star Wars timeline. While it might be too much to ask that Boba makes an appearance briefly wearing all-white armor before choosing his typical colors, it would absolutely be a dynamic homage to the original trilogy’s production and the character’s creation.

In any case, an appearance of the galaxy’s greatest bounty hunter at the dawn of his career seems ripe for The Bad Batch, especially now that Clone Force 99 is headed in the direction of becoming mercenaries in order to survive the changing galaxy.

After all, Hunter and his elite squad Clone Force 99 already rescued one of Jabba the Hutt’s Rancors — and we all know who Fett was working for during the original trilogy era.

Plus, it would be nice to see an animated take on Boba Fett that isn’t the Holiday Special version…

What do you think? Will Boba Fett appear in Star Wars: The Bad Batch? Are you hoping Clone Force 99 takes on more mercenary missions in future Bad Batch episodes?