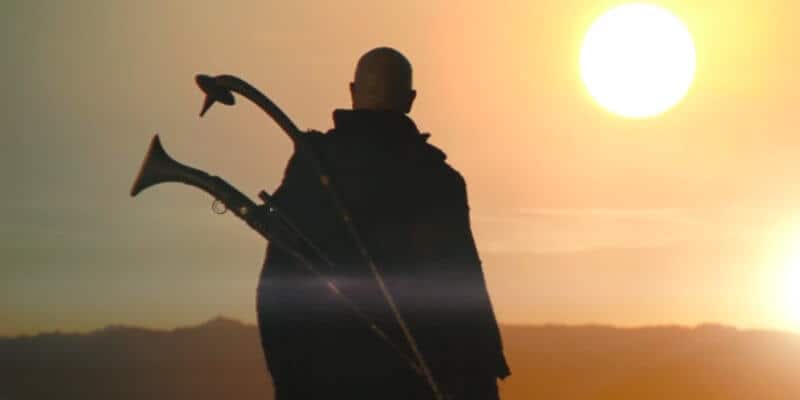 Although Star Wars fan-favorite character Boba Fett first appeared in the original Star Wars Holiday Special (1978) in animated form, he made his canon debut in Star Wars: Episode V – The Empire Strikes Back (1980).

40 years ago, actor Jeremy Bulloch was inside of Fett’s iconic Mandalorian armor as he tried to throw Han Solo (Harrison Ford) into a Sarlacc pit and, ultimately, wound-up getting thrown in himself instead.

The bounty hunter made his triumphant return to a galaxy far, far away in last week’s episode of The Mandalorian — Season 2, Episode 6 (Chapter 14: The Tragedy) — and, now, Morrison has sat down with the New York Times to share details about bringing Boba Fett back to life after four decades.

Morrison — who also voiced Tui in Disney’s animated Moana (2016) — began the interview by expressing his gratitude for being selected to reprise the role of any Fett character. He shared:

“…[after hearing rumors of a Star Wars bounty hunter movie] wondering if they were ever going to do anything with Jango Fett. My agent and I had a number of discussions — when are they going to call me? But then I kept forgetting about it. In this day and age, they have a number of options. They could have called other people to play the part. They can go with a fresh face. They could have called the Rock [who voiced Maui in Moana]. I felt so grateful that after all this time, something came to be.”

Morrison discussed his initial meeting with Mandalorian showrunners Jon Favreau and Dave Filoni and his excitement about returning to Star Wars is palpable even reading his comments now:

“…I was so excited I got there about two hours early — and there were conceptual drawings on the wall. I saw an image that looked like me, and I said, I’m sure that’s me. But even then, I didn’t want to get too excited…

…I was just going: “Wow! This is great.” It wasn’t until I got back in the car after the meeting that I went, “Is this actually going to happen?” But as you saw, it happened, all right.“

Obviously, as Morrison himself said, everything worked out in regard to casting — and, with rumors swirling that we haven’t seen the last of Boba Fett, the Times reporter, of course, addressed all of the the spinoff reports that have been circulating online. The actor responded:

“I’m just going to have to wait and see. I think a lot of it depends on how things go with this season, but I don’t really know. I wanted to bring everything I had to that [episode] and give them a glimmer of what I can offer. There’s room for this to go someplace. I hope I’m going to be included.”

Morrison ended his time with the Times quipping:

“Baby Yoda’s [Grogu] probably the biggest actor in Hollywood at the moment, but I never got to work with him very closely or with the people who move him around…hopefully I’ll get to meet him and we can have a little bonding session.”

Do you want to see more of Temeura Morrison’s Boba Fett as the Star Wars universe continues to expand on the Disney+ streaming platform? Tell us in the comments!