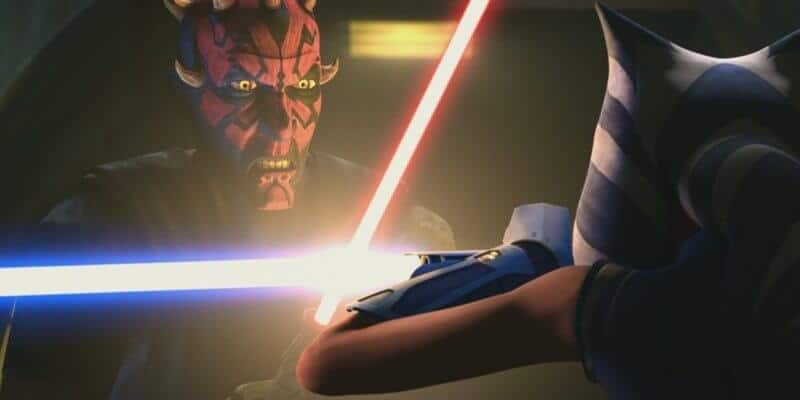 **SPOILERS Ahead For The Bad Batch Episode 5**

When Star Wars: The Bad Batch premiered on May 4, 2021, Dave Filoni and his team wasted no time bringing back some fan-favorite characters from previous series. We almost immediately met a young Caleb Dume — later Kanan Jarrus (Freddie Prinze, Jr.) in Star Wars Rebels — and discovered that he had lived through Order 66 thanks, in large part, to Clone Force 99’s Hunter. Now, it appears that Filoni, Jennifer Corbett, and Brad Rau are priming viewers for Maul’s return to the Star Wars franchise.

Then, Lucas and Filoni went on to bring Maul back in Star Wars: The Clone Wars — in which he killed Kenobi’s lover, Duchess Satine Kryze (Anna Graves) — and Filoni again introduced him in Star Wars Rebels.

All this to say there’s a definite precedent for Dave Filoni including Sith Lord Darth Maul in his work. And, now, The Bad Batch Episode 5 (“Rampage”) has perfectly set up his animated series return to the Star Wars story.

For those of you who are paying attention, yes, that’s the very same Ord Mantell where Harrison Ford’s Han Solo says he once had a close call with a bounty hunter in The Empire Strikes Back (1980).

Watching our band of “defective” clones go on a mercenary mission to rescue one of Jabba the Hutt’s Rancors (Muchi, in this case), might not seem strongly connected to Maul, but in reality, Ord Mantell has extremely strong ties to the Crimson Dawn crime lord.

In canon, Darth Maul’s criminal forces fought the Confederacy of Independent Systems on Ord Mantell as part of the dark-side in-fighting into which Maul dragged his Shadow Collective criminal syndicate.

When Maul’s story ends in Star Wars: The Clone Wars — immediately before Clone Wars spinoff, The Bad Batch, picks up — the Dathomirian Zabrak has been:

…imprisoned in a Mandalorian device that renders his Force powers useless, and [is] set to be taken to Coruscant to stand trial, but en route to the planet, Sidious [Maul was the Sith apprentice of Darth Sidious] executes Order 66, causing clone troopers from all across the galaxy to turn on and try to execute their Jedi generals. Maul is almost killed himself, but Ahsoka [Anakin Skywalker’s Padawan Ahsoka Tano], who survived her clones’ attempt on her life, rescues him, so that he may serve as a distraction while she and Rex try to escape. However, during his rampage, Maul destroys the ship’s hyperdrive, causing it to crash on a nearby moon. He then betrays Ahsoka and steals her shuttle to escape, though Ahsoka and Rex also manage to escape from the ship before it crashes.

Star Wars timeline-wise, this means that there’s no reason Maul can’t appear in The Bad Batch following his escape from Tano and clone trooper Captain Rex.

In fact, given that Filoni and Co. just perfectly set the stage for Maul to come back with Clone Force 99’s little trek to Ord Mantell, we could even see him as early as next week’s episode…at least in theory.

What do you think? Will Clone Force 99 get entangled with Maul in the Star Wars universe at some point soon?