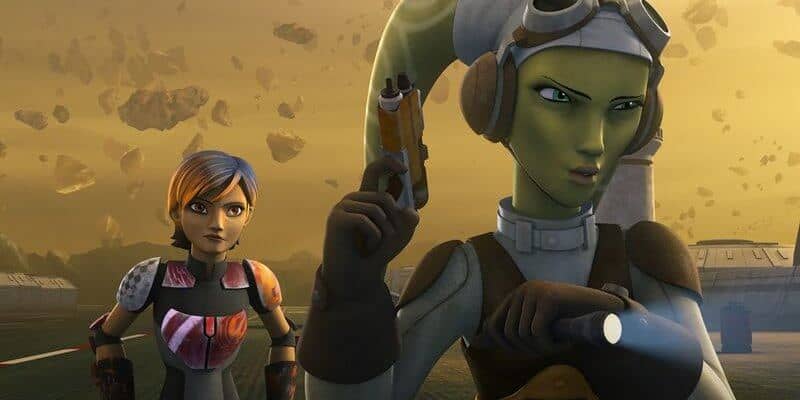 If you’ve ever watched Star Wars Rebels, you’re probably a fan of Ghost ship pilot, Hera Syndulla. She’s strong, no-nonsense, and one of the best dang pilots the Rebellion has ever seen.

When Star Wars fans first met the Twi’Lek, voiced by Vanessa Marshall, in Rebels, it was 5 BBY.

Over the course of four years (in the Star Wars timeline), we watched her get into her fair share of scrapes with the rest of her motley crew, Kanan Jarrus (Freddie Prinze, Jr.), Sabine Wren (Tiya Sircar), Garazeb ‘Zeb’ Orrelios (Steve Blum), Ezra Bridger (Taylor Gray), and Chopper the droid.

We also watched Syndulla fall for Jarrus, ultimately having a son, Jacen Syndulla, with him. Now, thanks to “Victory’s Price”, the final installment in the Star Wars: Alphabet Squadron novel trilogy, we have an idea of what happened to Syndulla after the Rebels epilogue, which took place around 4 ABY.

Set in 5 ABY, when the Battle of Jakku — the final battle between the Republic and the Galactic Empire took place — “Victory’s Price” is the follow-up to “Alphabet Squadron” (2019) and “Shadow Fall” (2020). Recently, author Alexander Freed sat down with StarWars.com to discuss the novelization, sharing details about Syndulla and her cohorts.

He specifically discussed character Yrica Quell, who was believed by her squadron to be deceased. However, they come to discover she had joined Shadow Wing, the Alphabet Squadron’s Imperial foil. Freed explained Syndulla’s reaction to the unfortunate news, and it’s perfectly in character:

“How do the pilots react? “Not well” is the easy answer. Some view it as an outrage or an insult, while others wonder if they carry some responsibility or feel the need to set things right. Only Hera has the presence of mind to view it in military terms instead of as a personal matter — though her relationship with Quell matters to her more than she’s eager to admit.”

Freed also shared his thoughts about the novel’s title, and why it matters in the existing Star Wars canon:

“‘The cost of war, and surviving it’ is as good a way as any to describe the central theme of the trilogy. In large part it appeals to me because it’s not something Star Wars often has a chance to showcase — we see a lot of war stories, to be sure, but for the most part we see the key victory that turns the tide and then leave the aftermath to the imagination.”

Then, Dawson herself teased the live-action appearance of Sabine Wren in the near future — although some fans theorize we have already seen her in The Mandalorian.

Then, live-action Aladdin (2019) star Mena Massoud began hinting that he has been cast as Ezra Bridger.

Suffice it to say that it would seem strange if Favreau and Filoni opt to introduce all of these Ghost crew characters without the Ghost’s captain making even a cameo appearance in The Mandalorian Season 3 or one of its spinoffs, Ahsoka and The Book of Boba Fett.

Furthermore, while the Alphabet Squadron trilogy certainly isn’t meant to directly set up future seasons of The Mandalorian, it would certainly be fascinating to explore Syndulla’s feelings toward the New Republic in 9 ABY — or after, if Pascal’s time jump tease is to be believed.

Furthermore, if Rangers of the New Republic is ever put back into active development following Lucasfilm’s firing of Gina Carano (Cara Dune), Syndulla could be the perfect character to lead the series. She would also naturally fit into the trajectory The Mandalorian universe seems to be taking, as many characters would already be familiar with her.

Another four years after the Battle of Jakku could see one of the Star Wars galaxy’s best pilots well on her way to another major adventure, and we’d love to see it play out in Favreau and Filoni’s ever-expanding corner of Disney’s streaming service.

What do you think? Is Star Wars already setting up Hera Syndulla’s TV return (and seemingly inevitable live-action debut) in a Mandalorian spinoff?