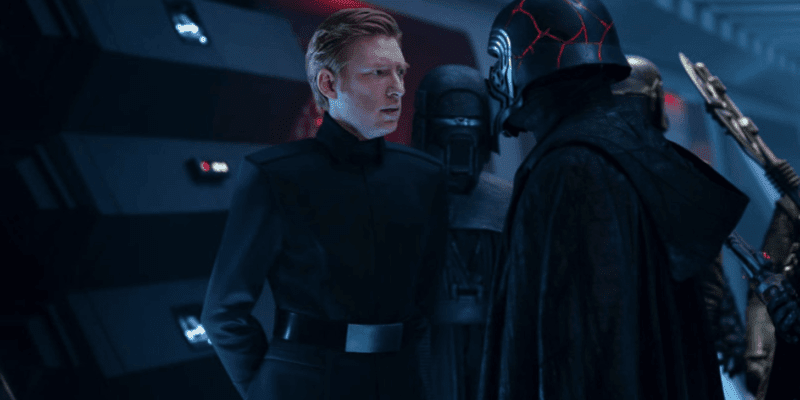 This meant expectations for Rise of Skywalker were high and Abrams had to deliver. Unfortunately, there were a number of befuddling plot points (including Supreme Leader Snoke’s general existence) — which the director has since acknowledged — that made the entire movie feel rather disjointed to many viewers.

In fact, one Rise of Skywalker storyline was ripped directly from another Star Wars project, the animated series Star Wars Rebels.

In TROS, fans discovered that an unknown informant within the First Order was actually a Resistance mole, providing classified details about the Imperial remnant to Resistance leaders.

Following the death of Snoke at the hands of new Supreme Leader Kylo Ren (Adam Driver), it became apparent that the spy was General Armitage Hux (Domhnall Gleeson). Hux’s reasoning for turning on the First Order — which he had seemingly been extremely devoted to — was not well explained.

Before his death, he indicated only that he wanted to see Kylo Ren brought down, in a bit of a “the enemy of my enemy is my friend” trope.

If all of this rings a bell, it probably means you’ve watched Dave Filoni’s Rebels, in which Agent Alexsandr Kallus (David Oyelowo) is featured in a very similar story arc. CBR explained it well:

A high-ranking Imperial Agent, he took his job very seriously and was dedicated to tracking down and eliminating the heroes. But in Season 2, Episode 17, “The Honorable Ones,” the seeds of Kallus’ growth were firmly planted and watered when he became stranded on an ice moon of Geonosis with Ghost member Zeb following a failed Imperial attack on the Rebels….When Kallus saw how much Zeb’s friends risked to save him at the episode’s end, he began to rethink his old allegiances, eventually leading him to become disillusioned with the Empire and turn spy for the Rebels. By the time he took up the storied spy mantle of Fulcrum, it was a natural and earned change of allegiance.

Although these stories feel similar, the Rebels version was worked in significantly more naturally than General Hux’s supposed shift in views.

Perhaps the main variance between the two Imperial sympathizers was that Kallus actually changed his ways — the character actually grew as a person. Meanwhile, Hux’s story felt like a rushed attempt to explain how the Resistance was suddenly receiving classified information, with no real thought process behind it (perhaps the filmmakers had recently watched some Rebels).

At this time, it remains unconfirmed if any of the sequel trilogy actors will return for future projects in the Star Wars galaxy or what the future holds for the many popular characters from Rebels.

It is, however, presumed that both Ghost crew member Ezra Bridger and villain Grand Admiral Thrawn will make their live-action debuts in Jon Favreau and Dave Filoni’s Mandalorian spinoff series, Ahsoka. Although Favreau and Filoni haven’t officially confirmed this, the show is expected to function as a sort of live-action Rebels sequel series.

There has been no word on whether or not Kanan Jarrus (Freddie Prinze, Jr.) could appear in a flashback sequence. The character was recently reintroduced, under his childhood name Caleb Dume, in Star Wars: The Bad Batch.

Furthermore, there have been rumors that Ghost ship pilot Hera Syndulla will appear at some point, perhaps in Rangers of the New Republic — if it is ever put back into active development — following Gina Carano’s (Cara Dune) firing.

What do you think about Rise of Skywalker taking a not-so-subtle cue from Rebels?

For now, you can catch up on the entire Skywalker Saga featuring the adventures of Jedi Knight Luke Skywalker (Mark Hamill), Princess Leia (Carrie Fisher), and Han Solo (Harrison Ford) on the Disney+ streaming service. All seasons of Star Wars: The Clone Wars (with Ahsoka Tano) and every episode of Star Wars Rebels motley crew are also available 24/7.