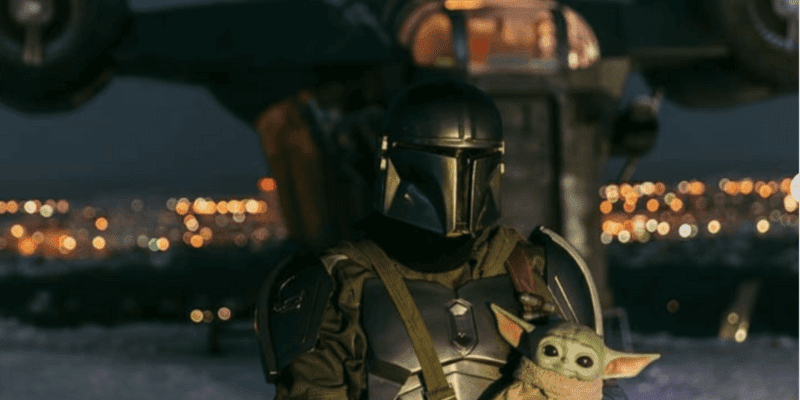 Over the course of (almost) two full seasons of Jon Favreau and Dave Filoni’s hit Star Wars series, The Mandalorian, fans found themselves getting attached to the Razor Crest gunship.

The pre-Imperial ship belonged to bounty hunter Din Djarin (Pedro Pascal) and was heavily featured as the titular Mandalorian traversed the galaxy trying to complete his quest to deliver tiny Grogu (AKA Baby Yoda) to the Jedi Order.

Tragically, the Razor Crest was destroyed in The Mandalorian Season 2, Episode 6 (“Chapter 14: The Tragedy”) — The entire episode was chaotic. As Grogu sat on the Seeing Stone on planet Tython — before the Dark Trooper squadron kidnapped him — Djarin was confronted by Boba Fett (Temuera Morrison) and blast-from-the-past Fennec Shand (Ming-Na Wen).

Ultimately, Fett and Shand sided with Djarin and the Battle of Tython ensued. The Razor Crest, tragically, became one of the day’s fatalities. A single strike from Moff Gideon’s (Giancarlo Esposito) cruiser destroyed the ship once and for all — or did it?

The Razor Crest lives on.

Now, some Star Wars fans from Russia have built an absolutely incredible life-size Razor Crest that you have to see to believe. Numerous photos of the amazing fan-made Mandalorian memorabilia have been shared to the Just Create (@just.ayaal) Instagram account.

This version of the Razor Crest was installed in a Russian park so tourists and locals alike can enjoy it. Translated into English, the caption on the following Instagram post reads:

There are also numerous photos and videos of the interior of the impressive replica ship, including this look at the working cockpit — Grogu and his little silver ball not included (as far as we know).

Another image of the Razor Crest construction process shows the team next to the starship. Seeing the group of designers and engineers next to their passion project really puts into perspective how massive this Star Wars ship is.

According to Ayaal Fedorov, the man behind the model, it is 46 feet long, 13 foot high and weighs more than a ton.

The construction took more than a year to finish.

The replica ship is powered by batteries, which enables lights inside and outside and powers the engine which moves parts of the ship.

We think Din Djarin and “The Kid” would be more than proud of this endeavor — and we might just have to travel to Russia to see it for ourselves someday.

The crowdfunders more than met the goal for the HasLab Razor Crest to be made and many had pre-ordered the Star Wars Vintage Collection Razor Crest during the second season of the popular Disney+ show.

Then, when the Razor Crest was unexpectedly destroyed, much online controversy ensued — fans were livid that Hasbro had taken millions of dollars for the Mandalorian bounty hunter transport model, presumably knowing that the ship wouldn’t make it through Season 2 unscathed.

At this time, the HasLab webpage for the Razor Crest model is still live, though it notes that the product is currently unavailable.

What’s ahead for The Mandalorian?

The Mandalorian saga is set to expand on Disney+. Showrunner Jon Favreau and executive producer Dave Filoni are currently working on The Mandalorian Season 3 and three spinoff series — Ahsoka, Rangers of the New Republic, and The Book of Boba Fett.

Ahsoka will follow Star Wars: The Clone Wars fan-favorite Ahsoka Tano (Rosario Dawson) in what is presumed to be a live-action sequel to animated series, Star Wars Rebels. Grand Admiral Thrawn and Jedi Ezra Bridger are expected to make their live-action debuts in the series.

Little is currently known about Rangers of the New Republic, but it may also have a Rebels connection. Since Gina Carano was fired by Lucasfilm, Cara Dune will no longer appear in Rangers. Current reports indicate that Rebels Ghost ship pilot, Hera Syndulla, may star in the series instead.

The Book of Boba Fett will feature Morrison and Wen reprising their roles as Boba Fett and Fennec Shand, respectively. The show will take place on the iconic Star Wars planet of Tatooine.

What do you think about this amazing Mandalorian Razor Crest replica?