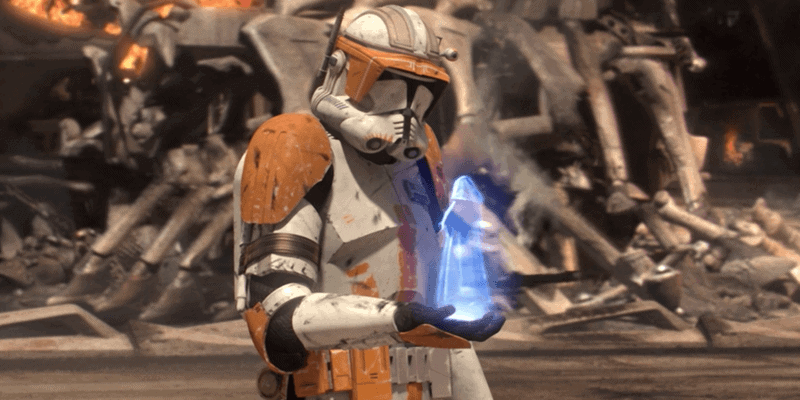 Star Wars has always found a way to tell new stories within its universe. When the galaxy far, far away debuted over forty years ago with George Lucas’s Star Wars: Episode IV – A New Hope (1977), it established the foundation of this immense and ever-growing franchise.

It always changes too, maybe not always in a huge way, but the Star Wars universe finds a way to inject thrilling new adventures into its already built framework. That being said, the latest episode of Dave Filoni’s The Bad Batch has begun to tell a deeper story of Star Wars‘s most brutal event in history.

WARNING! Spoilers ahead for The Bad Batch Episode 7, “Battle Scars”

With Dee Bradley Baker back as the voice of the titular Bad Batch, or Clone Force 99, Filoni’s new animated series adds to Lucasfilm’s already impressive lineup of animated television shows. The Bad Batch debuted on Star Wars Day (May 4) and joins The Clone Wars, Star Wars Rebels, and Star Wars Resistance in the animated field, while also adding to the Star Wars studio’s expanding catalog of small screen outings — The Mandalorian and the recently wrapped The Book of Boba Fett.

While Baker does have his work cut out for him leading the main voice cast of experimental clones pretty much alone, The Bad Batch has introduced a new Jango Fett clone deviant character in the form of Michelle Ang’s Omega. Not much is known yet regarding Omega’s origins or her true story, but signs indicate she could be evidence of Kamino’s foray into Force-sensitive cloning — an idea which has pointed to the theory that Filoni may be attempting to solve the Star Wars sequel trilogy’s muddled story and obvious plot holes.

Despite following a seemingly mission-by-mission episode structure — which included the animated debut of Fennec Shand (Ming-Na Wen) –, The Bad Batch is offering Star Wars fans a look into the direct aftermath of Chancellor Palpatine’s rise to power and the formation of the Galactic Empire. The first episode, “Aftermath”, showcased a new angle of the Order 66 execution, and saw a young Caleb Dume — who would later become Kanan Jarrus, Ezra Bridger’s Jedi mentor in Rebels — escape the catastrophic events of the clone trooper attack — their new purpose to kill all remaining Jedi.

Last week’s episode, “Decommissioned”, signaled the downfall of the loveable clone, Wrecker. The Bad Batch squad member had already been complaining of headaches throughout the season’s first few episodes, but it was here that Star Wars fans really saw the potential of Wrecker’s transition to Empire soldier. In “Battle Scars”, Wrecker’s inhibitor chip finally activates, giving The Bad Batch its second heartbreaking battle — the first, of course, came when Crosshair’s chip was altered by Admiral Tarkin on Kamino.

Filoni’s characters have already established themselves as a tight-knit group, both in the show itself and outside of it in the fandom. The relationship between Hunter and Omega has sparked reminiscent feelings of a favorite Star Wars trope — the Wolf and the Cub — as seen in many of Star Wars projects like The Mandalorian and Star Wars Rebels.

Wrecker’s turn to the “dark side” was an emotionally charged affair. The clone went after his fellow squadmates in a vicious assault, even targeting his young friend, Omega, in the process. While the events were devastating, a deeper look into what this means for Star Wars‘s history highlights an even more disturbing truth.

When Order 66 was enacted in Star Wars: Episode III – Revenge of the Sith (2005), turning the clone army on its own, it paved the way for the rise of Emperor Palpatine’s Galatic Empire and gave a glimpse at the fledgling Rebellion in a rapidly changing galaxy. The clone’s turn on their generals — the Jedi — became the darkest moment in Star Wars history. But, its continued effects shown in The Bad Batch reveal it wasn’t just a one-time thing.

With no Jedi present and no Imperial forces giving orders, Wrecker’s destructive attack on his brothers “for not following orders” demonstrates that Order 66 isn’t as distinct as just killing the Jedi. His onslaught quickly turns to Omega too for “conspiring” with the Bad Batch squad. This absolute switch in persona gives Order 66 an even more sinister history.

Throughout The Clone Wars, Star Wars has shown that the clones are more than their birthright — that they have names, identifies, and a reason to exist beyond their military expertise.

Order 66 was never just about removing the Jedi from command, it was about ultimate authoritative control. Sure, this might have happened off-screen in Revenge of the Sith and beyond, but in The Bad Batch it’s upfront and ugly — it’s clear that Palpatine’s Order was never just about killing the galaxy’s protectors. The inhibitor chip “failsafe” built into the clones was a plan of possession, and Filoni changes what Order 66 meant for the galaxy.

The episode — which saw the return of fan-favorite Clone Wars character, Captain Rex — revealed that Clone Force 99 remains intact for now, after having their inhibitor chips surgically removed. However, the shadow of Order 66 is an ever-present danger and only time will tell if it will come back to haunt the formidable crew once again. The lack of Crosshair in the past couple of episodes suggests it is on its way and the Star Wars galaxy better be prepared.

Do you think Crosshair will show up soon?