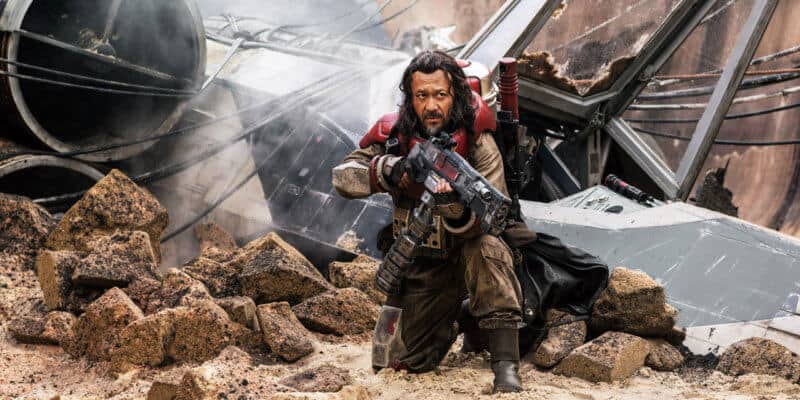 Chewie’s Bowcaster. The Mandalorian’s “whistling bird” beskar wrist rockets. Darth Maul’s Saberstaff. Star Wars is known just as much for its iconic weaponry as it is for its endless galaxy of characters and connections. Even with all the storied weapons in the Star Wars universe, one infamously holds the distinction of actually being highly illegal to wield — the MWC-35c repeating cannon.

In Rogue One: A Star Wars Story (2016), we meet the formidable firearm and its owner, the stoic and deadly Baze Malbus (Jiang Wen) — who uses the repeating canon’s considerable muscle to battle the evil Empire along Cassian Andor (Diego Luna) and the eponymous Rogue One rebel unit. Nicknamed “Staccato Lightning,” the double-barreled repeating cannon holds a staggering 35,000 rounds. That’s a lot of “pew pew” for one man.

In Star Wars Rogue One: The Ultimate Visual Guide, Lucasfilm creative executive Pablo Hidalgo detailed Staccato Lightning’s firepower, saying it had “… the equivalent of five laser rifles worth of destructive output,” and was intended to be mounted on an Imperial vehicle as support artillery. This designation makes it illegal to be used by a single person, or at all, in non-battlefield scenarios.

Of course, most Rogue One characters are killed off in the film’s climax and Baze is no exception. When we last see the former Guardian of the Whills, he’s going down in a blaze of glory at the Battle of Scarif. When his blinded warrior companion Chirrut Îmwe (Donnie Yen) is killed in an explosion, Malbus rushes the responsible Imperial death troopers – taking out several with his trusty, illegal repeating cannon before meeting his demise via C-25 fragmentation grenade blast. The Rogue One squad was ultimately successful in stealing and transmitting the Death Star plans to Princess Leia and the Rebel Alliance. While they paid the ultimate price, this powerful weapon played an important role in keeping the Death Star plans from the pursuit of Darth Vader and the Empire.

Is this the last audiences will see of Baze Malbus and his Staccato Lightning? Perhaps not, thanks to the magic of prequels. The upcoming Disney+ series, Andor, will take place approximately five years before the events of Rogue One. While this timeframe doesn’t seem to indicate that we’ll see Malbus fighting side by side with Cassian Andor again — the two would not have known one another at that time — it’s not out of the question that audiences may be treated to more backstory of Malbus, Îmwe, and the very cool, very illegal MWC-35c. Could we see Malbus and his signature weapon make a cameo in Andor on par with Luke Skywalker’s legendary green lightsaber in The Mandalorian season 2 finale?

What do you think? Will Andor give us a glimpse into the origins of the characters of the Rogue One rebel unit?

Comments Off on Meet the Most Illegal Weapon in ‘Star Wars’