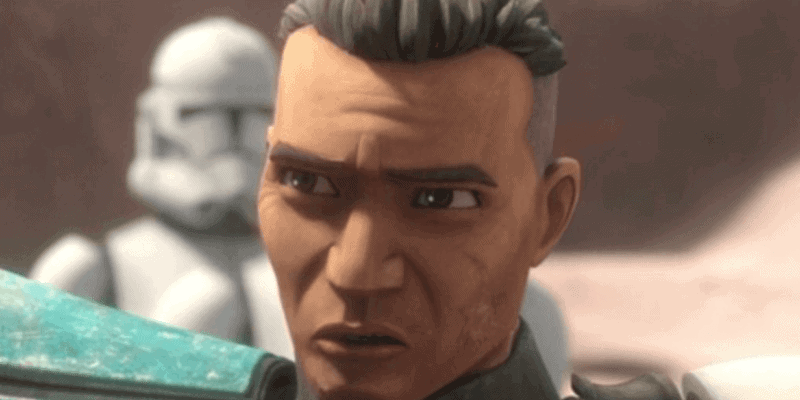 We were introduced to Howzer on the Twi’Lek homeworld of Ryloth, where the episode took place. From the first few scenes, Filoni and his team cemented Howzer’s loyalty to the Syndulla family — Cham Syndulla (Robin Atkin Downes), Eleni Syndulla (Ferelith Young), and young Hera Syndulla (Vanessa Marshall) –, to the point that many fans are questioning if he has somehow bypassed his inhibitor chip.

To be sure, Howzer has maintained significantly more of his humanity than any other “reg” we’ve encountered in the post-Order 66 galaxy. While other clone troopers are following the directive implicitly, Howzer’s moral compass still seems to be alive and well.

As Wookieepedia points out:

Although most clones were blindly compliant to orders following the activation of their inhibitor chips, Howzer retained his individuality, remaining friendly with Cham. He was hesitant to some orders directed at him, including ones which pitted him against the Syndulla family, and even chose not to report Hera Syndulla’s trespassing incident. When Admiral Rampart ordered punishment for Hera, Howzer argued that she was just a child, noticeably hesitating when his men were ordered to arrest her and her companions. He also chose to try and talk Cham Syndulla out of shooting Orn Free Taa [Corey Burton].

Since it isn’t Dave Filoni’s style to introduce a new character into the Star Wars universe without a clear purpose, it seems likely that Howzer will play a major role in at least the next few episodes of The Bad Batch, if not beyond.

In theory, he could even join forces with Clone Force 99 — Hunter, Wrecker, Tech, and Echo — to protect first-generation female Jango Fett clone, Omega, against Crosshair and the Galactic Empire, something that would clearly delight fans.

Mari posed the question that is seemingly on everyone’s mind:

// bad batch spoilers
–
–
–
–
–
–
–
–
I wonder if the fact that howzer constantly takes off his helmet and is the only clone there with unique armor due to the paint/color is symbolism that his chip doesn’t work pic.twitter.com/wnrr9fH0hp

He might of  [sic: had] only had like five minutes of screen time, but i’d do anything for Howzer

#thebadbatch
bad batch spoilers!!
–
–
–
–
–
–
–
–
He might of only had like five minutes of screen time, but i'd do anything for Howzer pic.twitter.com/PGXKv1UM6G

Izabo posted a meme featuring Howzer’s face on a puppy and captioned it:

// #TheBadBatch spoilers
–
–
–
–
–
howzer if you see this just know I will protect you with my entire being pic.twitter.com/V3VC0SnLgA

2/2 Captain Howzer made me forget I was watching Bad Batch and thought I was watching Clone Wars because I haven’t seen a good Clone Trooper, aside from the Bad Batch, in a LONG TIME. #badbatch pic.twitter.com/3cI3bcVZug

Athia/Kix has developed a strong attachment to the newest character in a galaxy far, far away, posting:

// tbb spoilers , the bad batch spoilers , #TheBadBatch spoilers
–
–
–
–
–
–
I'm genuinely so attached to Howzer if something happens to him I'll be completely destroyed and will never recover pic.twitter.com/iSczCf4dkV

At the time of publication, the hashtag #Howzer is trending on Twitter, so you can visit the social media platform to take part in all of the Captain Howzer appreciation.

It’s worth noting that Howzer was originally named “Ballast” in a Hasbro Star Wars: The Vintage Collection four-pack of action figures. It appears that his name was changed sometime during production, as he is the same character.

Do you love Captain Howzer? Are you looking forward to seeing him again in The Bad Batch, Episode 12 (“Rescue on Ryloth”)?