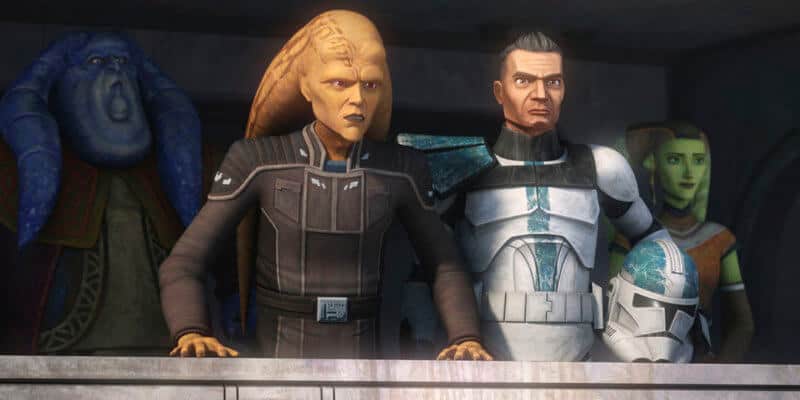 In last week’s episode of Dave Filoni’s Star Wars: The Bad Batch, we actually saw very little of The Bad Batch. Clone Force 99 appeared in a single, but crucial, scene in which they delivered arms to Gobi Glie (Corey Burton) and a young Hera Syndulla (Vanessa Marshall) — a scene that set the stage for the very earliest days of the Rebellion against the newly formed Galactic Empire.

Thanks to a tracking device placed by Clone Force 99 defector Crosshair (Dee Bradley Baker), however, Glie’s return to Ryloth did not go as planned. The Twi’Lek General was stopped by Imperial forces and chaos ensued.

A specific clone trooper — Howzer — was heavily featured in the eleventh installment of The Bad Batch. He’s not a character we’ve previously seen, and it’s unlike Filoni to introduce someone new to the Star Wars story without an express purpose.

Howzer, seemingly, has managed to somehow bypass the Order 66 protocol, at least in part. He has maintained significantly more of his humanity than any other “reg” we’ve seen under the influence of Emperor Palpatine’s directive.

Although most clones were blindly compliant to orders following the activation of their inhibitor chips, Howzer retained his individuality, remaining friendly with Cham. He was hesitant to some orders directed at him, including ones which pitted him against the Syndulla family, and even chose not to report Hera Syndulla’s trespassing incident. When Admiral Rampart ordered punishment for Hera, Howzer argued that she was just a child, noticeably hesitating when his men were ordered to arrest her and her companions. He also chose to try and talk Cham Syndulla out of shooting Orn Free Taa.

Since Episode 12 of The Bad Batch is titled “Rescue on Ryloth”, it seems likely that we will see Howzer again — and that he could even team up with our favorite elite squad of clone troopers to save the Syndullas.

There is even the possibility that Howzer could change Clone Force 99 for good, perhaps leaving his post and joining forces with them. At this time, nothing about a long-term Howzer story arc has been confirmed by Lucasfilm, however — but, it seems strange for a character to be so prominently featured in numerous scenes if he wasn’t going to play a role in the future, whether with The Bad Batch, Captain Rex, or someone else entirely.

Either way, Howzer’s existence is changing Clone Force 99 — they will soon discover that not all remaining clone troopers are as black and white as they thought, shifting the view the entire fan community has had of troopers’ actions following Order 66.

For a character so new to the Star Wars universe, Howzer has already garnered his fair share of controversy, primarily regarding his name!

Per the aforementioned Wookieepedia entry on the Captain Howzer — or Captain Ballast — character:

Prior to the release of “Devil’s Deal,” a figure for Howzer was displayed for pre-order as part of “The Bad Batch Special 4-pack” in Hasbro Inc.’s Star Wars: The Vintage Collection. The pack identified him as “Ballast.”

CBR also pointed out the minor controversy and noted:

There is no questioning that the character in “Devil’s Deal” and the action figure are one and the same. So, although there hasn’t been an official statement, it seems like his name was simply changed sometime in between when the action figures were designed and when the final audio for the episode was recorded…The confusion is warranted, but it’s not the first retcon that The Bad Batch has made to the Star Wars universe, and it probably won’t be the last.

This is proof that Howzer will undoubtedly remain one of the proverbial “good guys”, protecting the Syndullas — or even Omega — down the road.

Are you excited to see more Howzer?