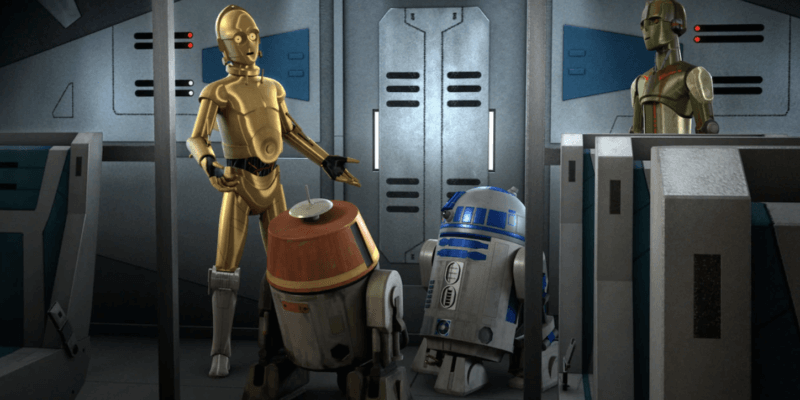 **SPOILERS for The Bad Batch Episode 11 ahead**

One of their mercenary missions for Cid (Rhea Perlman) has them delivering arms to Gobi Glie (Corey Burton) in the very earliest days of the Rebellion — but, we jump ahead of ourselves.

Instead of seeing the elite squad of clone troopers when the episode opens, we find ourselves on Ryoloth — homeworld of the Twi’Lek species, including a young Hera Syndulla. Since The Bad Batch takes place nearly three decades prior to Rebels, we see a much different version of Syndulla than we are used to, but her no-nonsense, take-charge attitude remains.

As it turns out, though, as formidable as Hera Syndulla becomes, Chopper is actually the character the Galactic Empire should fear. Per a detailed assessment of the little droid’s kill count, he has been responsible for the deaths of over 50,000 characters in the Star Wars franchise!

The assessment breaks down Chopper’s, er, murderous tendencies as follows:

This means that Chopper has the second most known kills of any Star Wars character associated with the Rebellion. Seemingly, only Luke Skywalker (Mark Hamill) — whose kill count is estimated to be around 370,000 — has more.

Chopper was the resident droid of the Ghost, assisting the crew in everything from ship maintenance to combat — even though he didn’t always want to. After many years of repairs and patch jobs, Chopper had a beat-up, worn look that matched his sometimes cranky personality. Aesthetics aside, he was an essential part of this small rebel team, and ultimately, was loyal and heroic.

Did you know Chopper had killed so many characters in the Star Wars galaxy?