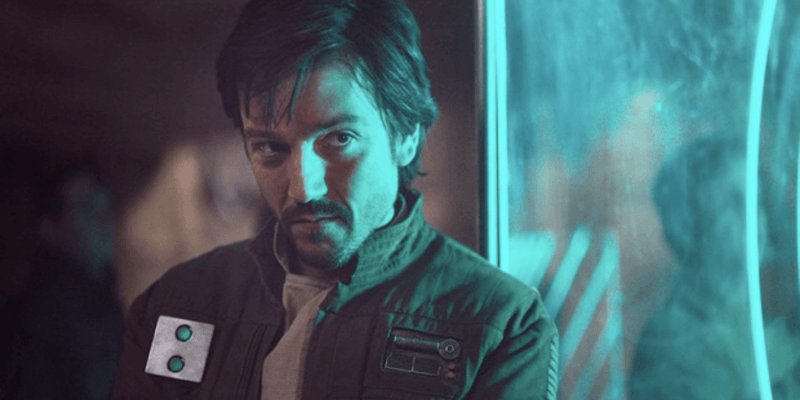 When Rogue One: A Star Wars Story (2016) released, it gave many Star Wars fans hope that The Walt Disney Company would, in fact, do their favorite franchise justice. Rogue One introduced a host of new characters to the Star Wars universe, including Galen Erso (Mads Mikkelsen), his daughter Jyn Erso (Felicity Jones), and rakish Rebel pilot Cassian Andor (Diego Luna).

Andor, in particular, became a fan-favorite — and now, Disney is gearing up to tell more of the spy’s story. During the 2020 Disney Investor Day event, Lucasfilm President Kathleen Kennedy gave the Star Wars fan base a first look at the upcoming Andor (2022) Disney+ series.

As if the sizzle reel wasn’t enough to get fans excited, now that the series is filming in England, there are plenty of set photos to tide us over until the show — which is rumored to have already been renewed for a second season — debuts.

The images show Diego Luna looking like a nearly unrecognizable version of Cassian Andor. Gone is the bomber jacket and devil-may-care attitude. Instead, Luna looks, as some fans online have pointed out, rather like Mena Massoud’s live-action Aladdin before he became Prince Ali Ababwa.

The surprising change in appearance makes sense, though, given that Andor will be set approximately five years before the Rogue One movie — which places it about half-a-decade before Star Wars: Episode IV – A New Hope (1977), as well. This means that Andor was still engaging in spy missions for the Rebellion and was, presumably, undercover at various points.

The set photos also feature shoretroopers, a stormtrooper class previously seen only once during the Scarif battle sequence in Rogue One. Whether Andor is on Scarif again during this prequel series, or meets the Imperial coastal defenders on another tropical planet, remains to be seen.

It is worth noting that there have been unconfirmed rumors that both Jedi Master Obi-Wan Kenobi (Ewan McGregor) and Ahsoka Tano (Rosario Dawson) will appear in Andor. Another casting leak on IMDb indicated that actress Denise Hough would be appearing as Duchess Satine Kryze.

Details about specific Andor plot points remain under wraps at this time, but the official description of the series reads:

…adventures of Rebel spy Cassian Andor during the formative years of the Rebellion and prior to the events of Rogue One: A Star Wars Story…The rousing spy thriller will explore tales filled with espionage and daring missions to restore hope to a galaxy in the grip of a ruthless Empire.

Are you looking forward to the Tony Gilroy-led Cassian Andor series, Andor? What do you think about these set photos of Diego Luna looking like a completely different version of the Rebel spy?