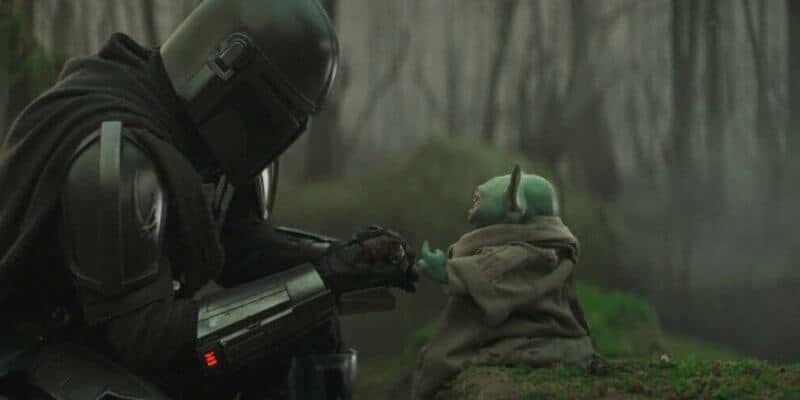 When showrunner Jon Favreau and executive producer Dave Filoni’s The Mandalorian debuted on the Disney+ streaming platform on November 12, 2019, Star Wars fans — and even viewers who had never watched a Star Wars movie in their lives — were instantly smitten by bounty hunter Din Djarin (Pedro Pascal) and “Baby Yoda”, his very unexpected asset.

Over the course of two seasons so far, we’ve watched as “Baby Yoda” — who we now know is named Grogu thanks to Ahsoka Tano’s (Rosario Dawson) Force connection with the tiny Jedi Padawan — and stoic Djarin have developed a father-son bond.

We breathed a sigh of relief when Moff Gideon (Giancarlo Esposito) was unable to steal Grogu away in the Season 1 finale episode, then mourned with Djarin when Moff’s Dark Trooper droids kidnapped the tiny foundling from the “Seeing Stone” on planet Tython.

Then, finally, we joined in the bittersweet moment when Jedi Knight Luke Skywalker (CGI Mark Hamill) arrived to simultaneously save the day and spirit Grogu away to complete his Jedi Order training.

Although we don’t know what is next for Grogu and Djarin in The Mandalorian Season 3 and its spinoff series, Filoni is already giving Star Wars fans the next “Din Djarin”, so to speak, in the form of a very surprising Star Wars: The Bad Batch character.

From the moment Clone Force 99 — Hunter, Tech, Echo, Crosshair, and Wrecker (Dee Bradley Baker) — met female clone Omega on Kamino, they knew there was something special about the little girl.

Ever since Crosshair succumbed to his inhibitor chip and became an Imperial commander under Governor Tarkin — forcing the elite squad of “defective” clones to go on the run from the Galactic Empire — the new Star Wars animated series has been setting up a parallel between Omega and Grogu.

The general understanding has been that Clone Force 99’s de facto leader, Hunter, is functioning as Omega’s version of Djarin. But, in reality, it seems that Filoni and his team may actually be poising the most unlikely clone trooper in the bunch, Wrecker, to take on that role.

Wrecker, from day one, has been Omega’s best buddy — he gave her his beloved stuffed toy, Lula, when he put together her very own bedroom on the Havoc Marauder.

He also, by the same token, was the only member of Clone Force 99 to take actual action after realizing how important it was to make Omega feel welcome and like a part of the team. The little clone had never had her own room before and it was Wrecker — not Hunter — who finally gave it to her. This was reminiscent of Djarin giving Grogu his own “room” on the Razor Crest before its destruction.

Furthermore, Wrecker is the clone trooper who has developed traditions with Omega — like the Mantell Mix they eat on Pantora every time the team successfully completes mercenary missions for Cid (Rhea Perlman).

And, after Wrecker nearly gave in to his inhibitor chip after too many hits to the head (before Captain Rex removed it on Bracca), Omega immediately forgave him for coming after her, just as a child would forgive her father.

Most recently, when Omega was taken by bounty hunter Cad Bane (Corey Burton) in The Bad Batch Episode 8, Wrecker was the most panicked and, arguably, the most desperate to find her.

As Star Wars: The Bad Batch continues, we’re sure to see more of Omega and Wrecker’s bond as it develops with each episode. Although Hunter undoubtedly cares for the first-generation clone of Jango Fett, he is, as he told Rex, most concerned with doing what is “best for his team”.

Wrecker, on the other hand, seems to care largely about doing what is best for Omega, which is a mirror of Djarin’s relationship with Grogu — the bounty hunter ultimately came to care more about what was best for the foundling than nearly anything else in his life.

Which character do you think is being set up to be the next “Mandalorian” as the latest Star Wars series continues?