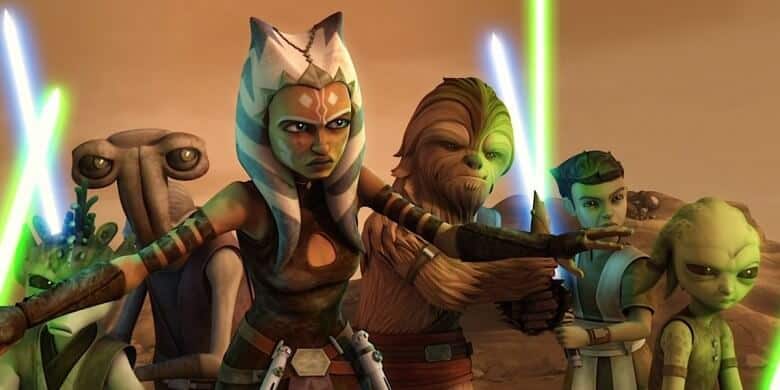 When George Lucas and Dave Filoni created the animated series Star Wars: The Clone Wars, they could not have known how popular certain characters from the show would become.

Many are even being introduced into the live-action Star Wars universe, with Rosario Dawson taking on the role of Tano in The Mandalorian Season 2, and Offee reportedly appearing in an upcoming live-action show as well.

Furthermore, Clone Wars has given rise to an animated spinoff series that follows the four-episode Clone Force 99 story arc from its seventh and final season. Star Wars: The Bad Batch follows the adventures of the elite squad of “defective” clone troopers — Hunter, Echo, Wrecker ,Tech, and Crosshair — in the days following Order 66, when the Emperor Palaptine and Governor Tarkin’s Galactic Empire is just starting to take hold across the galaxy.

But, before there was The Bad Batch, there was almost another Clone Wars spinoff series — and this one would have been adorable, by all counts.

One description of the series shared these details:

A series of episodes focusing on a collection of young Padawans aired during the series’ fifth season in early 2012, and it was meant to establish a new group of characters who would star in their own show. The adolescent protagonists were Petro, Katooni, Byph, Ganodi, Zatt, and Gungi, with each character belonging to a different species (Gungi was a wookiee, for example.) The episodes introducing these figures centered on the younglings – with the help of Ahsoka Tano and a wise droid voiced by David Tennant — trying to form their own lightsabers, only to have the exercise interrupted by space pirate Hondo Ohnaka.

The Clone Wars Season 5 episodes in which the group of younglings appeared include “Creche and Burn” and “A Test of Strength”.

Per the Wookieepedia entry about the unmade show:

In November 2016, one month before the release of Rogue One: A Star Wars Story, Pablo Hidalgo revealed via Cinemablend that the planned spin-off was the last Star Wars project in which George Lucas worked on before selling Lucasfilm Ltd. to The Walt Disney Company in 2012.

Related: In His Own Words: George Lucas FINALLY Shares Why He Sold ‘Star Wars‘

Although the spinoff series was never produced, never say never when it comes to Dave Filoni reintroducing old, unproduced story arcs in new ways. In The Bad Batch, for example, it looks like we’re barrelling straight toward a major scrapped Clone Wars scene in which first-generation Jango Fett clone, Boba Fett, and bounty hunter Cad Bane (Corey Burton) have an epic showdown.

So, there certainly exists the possibility that we haven’t seen the last of the Padawans who were supposed to get their own Star Wars series.

What do you think? Will the younglings finally get their chance to return to the Star Wars galaxy?