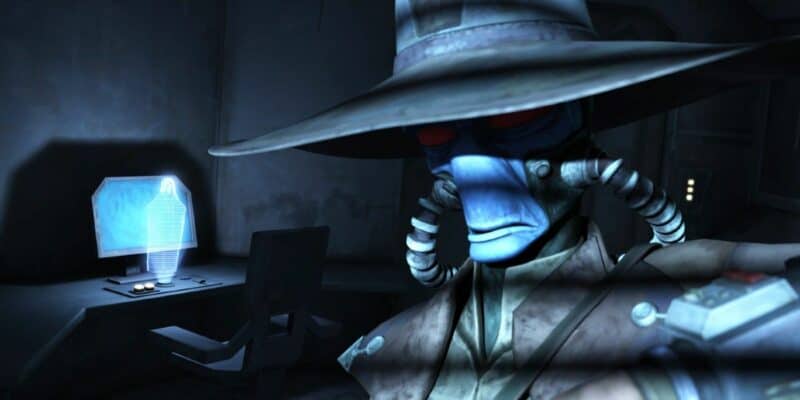 From Bossk to Din Djarin, bounty hunters play an important role in the Star Wars universe. Two fan-favorite bounty hunter characters — Boba Fett and Cad Bane — were introduced to the franchise at two very different points in history, but their interconnected story is now at the forefront of the Star Wars franchise moving forward.

Fett, of course, made his first canon appearance in Star Wars: Episode V – The Empire Strikes Back (1980) — then returned in The Mandalorian saga in 2020 — while Bane wasn’t introduced until George Lucas and Dave Filoni’s Star Wars: The Clone Wars animated series.

Bane most recently returned — in conjunction with Fett’s Mandalorian companion, Fennec Shand (Ming-Na Wen) in Star Wars: The Bad Batch. Although the duo have yet to be seen onscreen together, though this could certainly happen in The Book of Boba Fett, we know that Bane served as a mentor, of sorts, to young Boba Fett and even know Boba’s “father”, Clone Army of the Republic template, Jango Fett.

What is Cad Bane’s purpose in Star Wars: The Bad Batch?

In Star Wars: The Bad Batch Episode 8 (“Reunion”), we pick up back on Kamino where former Clone Force 99 member, Crosshair (Dee Bradley Baker), makes his reappearance as an Imperial officer.

Crosshair — under the control of his inhibitor chip — is sent with a veritable legion of stormtroopers to track Clone Force 99 to the decommissioned Jedi cruiser on Bracca after their location is discovered by the Galactic Empire.

Meanwhile, Hunter, Tech, Wrecker, Echo, and young female clone Omega are preoccupied with the Scrapper Guild tracking them — but, soon realize they have bigger problems when they come into contact with Crosshair, who is intent on getting rid of them once and for all, though his mission — at least in this particular installment — ultimately fails.

Then, the biggest problem of the 27-minute episode arises when Hunter realizes that they are not alone with the scrappers and the Empire. He tells Omega, “This isn’t the scrappers’ handiwork”, just before the week’s biggest surprise emerges.

Old West-inspired gunslinger bounty hunter Cad Bane (Corey Burton) is back, sent by the Kaminoans as a “contingency plan” to get Omega back.

Looking like he could be entering the door of any saloon west of the Mississippi, Bane makes clear that he’s there for Omega. Hunter, of course, tries to protect his charge but proves to be no match for Bane, who is one of the fiercest bounty hunters in the galaxy.

The Duros ultimately shoots Hunter in his chest plate — though he does survive to be taken back to the ship by the rest of his clone trooper squad — and gets away with Omega in tow. As Wrecker panics about the loss of his young friend, Hunter’s final words of the mid-season episode are, “We have to find her.”

There’s little doubt that Clone Force 99 knows about the ruthless bounty hunter and his reputation. By this point in the Star Wars timeline, Bane had already gone toe-to-toe with some of the most skilled Jedi Knights in the Republic — Obi-Wan Kenobi, Quinlan Vos, and Anakin Skywalker.

He was also tasked with abducting Emperor Palpatine/Darth Sidious at Count Dooku’s behest. Though Dooku ultimately betrayed the bounty hunter, his skills were clearly sought after, and it’s unlikely he would have escaped the notice of the “defective” band of clone trooper soldiers.

Implications of the reintroduction of Cad Bane

The biggest implication in this entrie Bad Batch storyline is the reintroduction of Bane — and his droid Todo-360 — as it opens up a world of possibilities for Dave Filoni and Co. moving forward.

While many Star Wars fans thought Cad Bane might next appear in live-action in The Book of Boba Fett or The Mandalorian Season 3, it seems that Filoni didn’t want to wait that long to bring the popular character back.

Now, the opportunity has finally arrived for a major unproduced Clone Wars story arc to finally see the light of day, whether in live-action or even in The Bad Batch Season 2, coming in 2022. To understand this plot, it is imperative to know that Bane has close ties to the Fett family, both Jango Fett and his son, Boba.

In fact, Bane was trained by Jango before the clone template’s death at Mace Windu’s (Samuel L. Jackson) hands on Genosis. This plays into Filoni’s scrapped Clone Wars story, which would have played out as follows:

When Boba Fett struck out on his own to become a bounty hunter like his father, it was Bane who took it upon himself to train the young clone as a way to return the favor to Jango. The name Boba Fett likely wouldn’t be as feared across the galaxy without Bane showing him the ropes.

But The Clone Wars once planned to pit Bane and Boba Fett against each other before the show ended its original run in 2014 (it returned in 2020 for 12-episode final season). An unproduced four-episode arc would have seen the two bounty hunters team up on a rescue mission to Tatooine.

One scene, in particular, a duel between the two popular bounty hunters, was set to explain the dent in Fett’s Mandalorian beskar helmet — a literal “mark” from Bane that would presumably be with him for the rest of his life.

Bane’s own fate is never determined, and Star Wars fans continually debate whether or not Jabba the Hutt and Aurra Sing’s former henchman lived or died after fighting Boba Fett.

The reintroduction of Bane in The Bad Batch opens the door for Filoni to deliver his Fett-Bane showdown sooner rather than later, whether the scrapped Clone War–era arc is reimagined or the duo come to blows in another way — or, even, in a live-action series. After all, as we noted earlier, Temuera Morrison is already back as Boba Fett.

Plus, Filoni and Mandalorian creator Jon Favreau certainly have ample opportunity to showcase the two bounty hunters together, with at least three live-action shows in the works right now, and a clear commitment to introducing as many Star Wars Rebels and Clone Wars characters as possible into the live-action Star Wars galaxy.

After all, Ahsoka Tano (Rosario Dawson) is already back and it seems that both Grand Admiral Thrawn and Ezra Bridger are on their way in Ahsoka.

Predictions for the future of Cad Bane and Boba Fett

You can watch the entire Boba Fett and Cad Bane battle that was not to be below, thanks to a screening at the 2017 Star Wars Celebration convention:

It is, of course, possible that we’ll see this exact sequence play out in the Star Wars story, whether in live-action or animation.

However, there are also a number of other ways the Boba Fett and Cad Bane reunion could play out. At this point, it is not entirely clear who is the more powerful bounty hunter. During Boba’s younger years, Bane, of course, was the more experienced bounty hunter — he was even integral in Count Dooku’s kidnapping plot against Chancellor Palpatine.

In The Mandalorian and The Book of Boba Fett era, though — about five years after the original trilogy ended with Star Wars: Episode VI – Return of the Jedi (1983) — Fett has years of experience under his belt, er, beskar, as well, including a close relationship with the one and only Darth Vader.

Do you think we’ll finally see a fully realized version of Cad Bane vs. Boba Fett?

Comments Off on Boba Fett vs. Cad Bane: Which Bounty Hunter Is More Powerful?