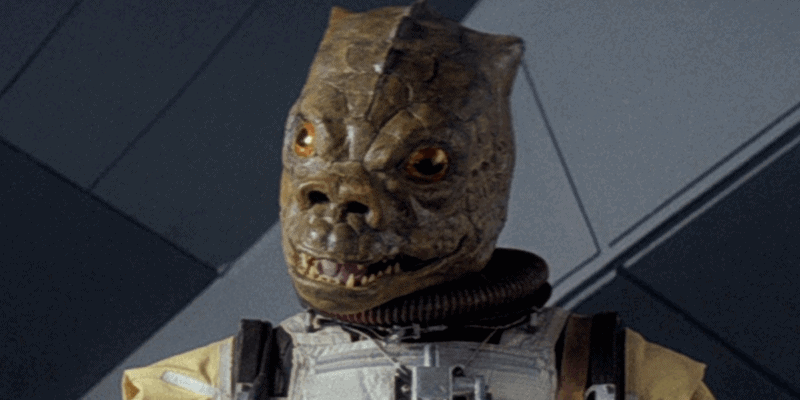 Boba Fett is without a doubt the most popular bounty hunter in the Skywalker Saga — remember, this excludes Din Djarin (Pedro Pascal) since he didn’t show up until The Mandalorian in 2019.

Fett’s influence in Star Wars: Episode V – Empire Strikes Back (1980) and Star Wars: Episode VI – Return of the Jedi (1983) sometimes goes unnoticed, but without Fett pulling some major strings, we probably would not have ended up seeing Jabba the Hutt’s palace or even have gotten to watch Grogu being saved by Djarin in The Mandalorian.

To be a famous bounty hunter in Star Wars is a dangerous and difficult mantle to achieve. Still, Boba Fett generally goes unmatched when it comes to most fans listing their favorite bounty hunter. But, wait just a minute. Star Wars fans have been sleeping on one incredibly important Trandoshan that’s taking the crown from Fett.

Bossk just proved himself to be the king of the hill when taking out your target in Star Wars: Bounty Hunters #11. Sure, we’re not seeing Bossk do some heavy lifting on screen in a movie or TV show, but Star Wars comics are just as influential in live-action storytelling as George Lucas’s original films. Who’s to say that we won’t be seeing Bossk in The Book of Boba Fett or future Mandalorian seasons?

In Star Wars: Bounty Hunters #11, Bossk awakens on Malastare (a critical battlefield during the Clone Wars), where he is prey in the Great Hunt. Soon, the hunted becomes the hunter. Bossk is far too dangerous to hunt down and quickly becomes a serious threat on the gas-mining planet.

The Great Hunt of Malastare is an event put on for hunting groups to go after prey for fun, but Bossk is the only one having fun. Though he is supposed to be part of a prison group to be hunted, the bounty hunter quickly takes on his predators head-on, turning them into prey. Bossk is seen taking on a group of hunters referred to as the Muun party, who have connections to the InterGalactic Banking Clan. They are allies to the Empire, used for their financial prowess in exchange for protection. However, this protection doesn’t apply to the Hunt, and using a combination of weaponry, hand to hand combat, and strategic thinking, Bossk makes quick work of his foes, proving that numbers are not exactly an advantage when facing this particular bounty hunter – and Imperial protections mean nothing to him.

Being able to see one of your favorite bounty hunters glorified in a deep and new way is pretty rewarding, especially if you’re always playing as Bossk in “Battlefront II” and crushing Rebels alongside Darth Vader.

Bossk is a skilled huntsman, like the Mandalorians, for many reasons. One, combat is a large part of Trandoshan culture. Trandoshans learn important hand-to-hand combat and hunting skills from birth, impressing a greater and deadlier desire for success as they grow older and more skilled. Trandoshans can also regrow limbs and hosted similar hunts like the one on Malastare, taking pride in hunting dangerous Wookiees.

Related: With One Change, ‘The Mandalorian’ Can Fix a Huge Problem

Boba Fett missed important training as a child since he was not raised on Mandalore, but funny enough, Bossk trained him.

In The Clone Wars, fans got a sneak peek into Boba Fett’s early life that featured Bossk himself training the orphaned Fett in essential combat and shooting skills. Taking the place of the late Jango Fett, Bossk teaches Boba the 101 on hunting down prey. Bossk spent a considerable amount of time training and protecting Boba Fett in his adolescence. But, like Anakin Skywalker, Boba Fett is unable to outperform his master.

While Boba Fett is a deadly killer with a galactic license to kill (I don’t think that’s actually a thing), Bossk’s psychological, physiological advantages put him on a whole different level when it comes to bounty hunting. On top of that, Bossk spent countless times with some of the deadliest bounty hunters in the galaxy, like Aurra Sing and Beilert Valance.

While Boba Fett would grow into his own skills and make an important name for himself in the Outer Rim, Star Wars: Bounty Hunters #11 proves that Bossk is the supreme bounty hunter.

Did you know this about Bossk and Boba Fett? Let us know in the comments below!