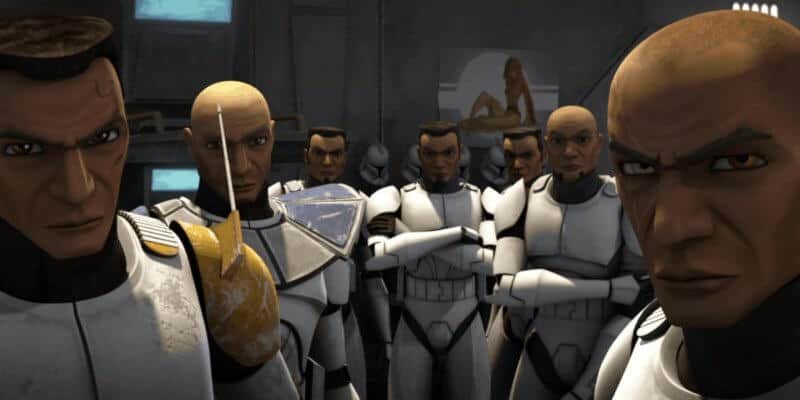 She even revealed the 50-year-old infant’s real name, Grogu, for the first time. Dawson is now set to reprise her role as the former Jedi in Mandalorian spinoff series, Ahsoka.

Related: A Surprising ‘Star Wars’ Character Is the New ‘Mandalorian’

In addition to new instant fan-favorites like Captain Howzer, the crew has already encountered several Clone Wars characters, including Captain Rex and the Marquez sisters, Trace and Rafa — who may or may not have been accompanied by Tano’s droid, R7-A7.

Bounty hunter Cad Bane (Corey Burton) has also made his triumphant return to the Star Wars franchise in The Bad Batch.

In the latest installment, Episode 14 (“War-Mantle”), Filoni brought back even more Clone Wars characters so subtly you might have missed them altogether.

As Den of Geek noted, the return of clone trooper CC-5576, Gregor, was done in such a way that even big fans might not have realized they were watching a Clone Wars character:

The episode’s major new character is actually a returning face from The Clone Wars, although you wouldn’t necessarily know it. He first appeared in the episode “Missing in Action” in season five, living as an amnesiac dish-washer. R2-D2 and others found his clone armor and jogged his memory, just in time for Gregor to be seemingly killed in battle.

Den of Geek’s article also shared details about the return of Scorch, a minor Clone Wars character, who is part of the elite Delta Squad in the Star Wars Expanded Universe:

…the trooper with white and yellow armor and a bright blue visor is RC-1262 “Scorch,” one of the clone troopers from the Republic Commando video game, which is no longer canon. But Scorch was later re-canonized with a minor role in The Clone Wars season three episode “Witches of the Mist.”

Although we can’t know yet who else will appear before the end of The Bad Batch Season 1, it’s clear that Filoni is committed to bringing back as many Clone Wars characters as he can as the Star Wars saga continues to expand to new reaches of a galaxy far, far away.

Who has been your favorite Clone Wars cameo appearance so far?