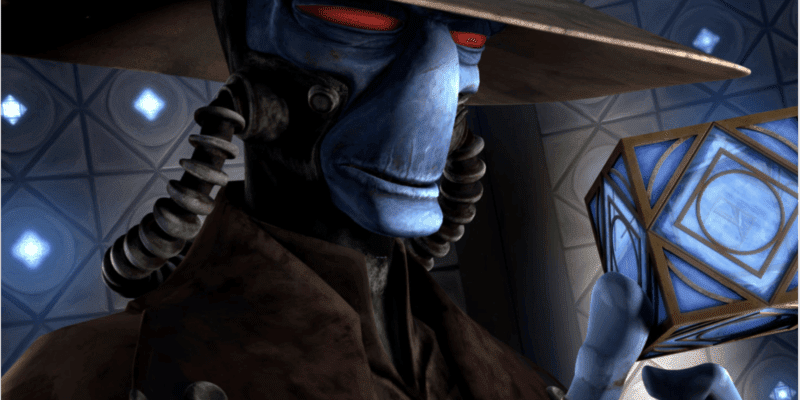 If there’s one thing Lucasfilm Executive Creative Director Dave Filoni knows how to do, it’s tell a story in a way that has Star Wars fans begging for more. This is how many of Filoni’s Star Wars: The Clone Wars characters have come to make their way into new Star Wars series, sometimes in live-action.

Such was the case for Anakin Skywalker’s Padawan, Ahsoka Tano — voiced by Ashley Eckstein, played in live-action by Rosario Dawson — who made her live-action debut in The Mandalorian Season 2, Episode 5 (“Chapter 13: The Jedi”).

The installment, which happened to be directed by Filoni himself, also brought the villainous Grand Admiral Thrawn — voiced by Lars Mikkelsen in Star Wars Rebels — into the live-action Star Wars universe, when he was named by planet Corvus Magistrate Morgan Elsbeth (Diana Lee Inosanto).

Thrawn is rumored to have already completed filming of his first live-action series in the upcoming The Book of Boba Fett, though the actor playing the role has not been officially confirmed.

And, now, it seems that another Clone Wars fan-favorite, bounty hunter Cad Bane, may be showing up in the first Mandalorian spinoff as well.

Per a new reported leak, Bane is set to show up in the new series, which is not entirely surprising. Many Star Wars fans already expected Bane, and even, perhaps other bounty hunters like The Mandalorian himself — Pedro Pascal’s Din Djarin — to make cameo appearances alongside the most notorious bounty hunter of them all, Temuera Morrison’s Boba Fett.

One article about the reported — though unconfirmed — Cad Bane live-action debut noted that his recent story arc in Filoni’s latest animated endeavor, Star Wars: The Bad Batch, could prove to be crucial viewing ahead of The Book of Boba Fett‘s December 2021 premiere:

The Kaminoans hired Bane in an effort to kidnap Omega back from Clone Force 99, but Bane was ultimately unable to do so thanks to the efforts of Fennec Shand. As portrayed by Ming-Na Wen in both series, Shand is a bounty hunter character from The Mandalorian shown to be close to Boba Fett, so perhaps this connection was laid to in order to build up Bane’s story before his alleged arrival in The Book of Boba Fett.

Bane was also instrumental in carrying out the Galactic Empire’s insidious Project Harvester program — he stole the Jedi Holocron that gave Imperial forces access to the names of all of the Force-sensitive children in the galaxy, thereby allowing several of them to be abducted for nefarious purposes.

At this time, it is not known precisely how Bane could play into The Book of Boba Fett, and future “Mando-verse” series like The Mandalorian Season 3 and Ahsoka.

In addition to Bane, some fans are hoping to see other Clone Wars characters like clone trooper favorites Commander Cody and Captain Rex (Dee Bradley Baker), Aurra Sing (Jaime King), and Asajj Ventress (Nika Futterman) join upcoming live-action shows, whether in flashbacks or in the current point in the Star Wars timeline.

Given his age — he is old enough to have known Jango Fett — it is possible that we’ll see him in a flashback sequence, although he could also show up as an older-looking version of himself. Although we know little about how the Duros species ages in the Star Wars universe, some fans have discussed the matter online, putting them at adulthood around age 15, so they likely age slightly faster than humans.

Are you hoping to see Cad Bane join the Star Wars galaxy in live action this December?