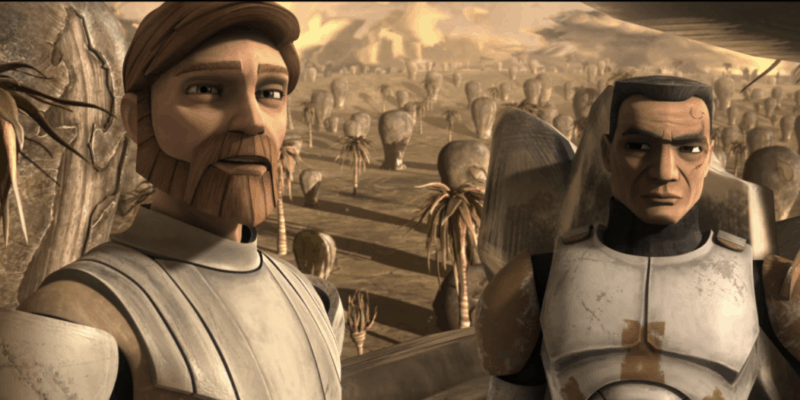 The soldier loyally fought alongside Jedi General Obi-Wan Kenobi until the execution of Emperor Palpatine’s Order 66, when he sadly succumbed to his inhibitor chip — unlike Captain Rex, whose chip was removed by Ahsoka Tano (Ashley Eckstein) using the medical equipment on a Jedi cruiser before he could attack her.

Rex, as a matter of fact, recently made his return to the Star Wars universe in Filoni’s latest project, Star Wars: The Bad Batch. Once Rex showed up to remove the inhibitor chips from Clone Force 99 — Hunter, Wrecker, Echo, and Tech — many fans expected that a Commander Cody cameo was imminent, but it never came.

This isn’t the first time the clone trooper was expected to make a return and didn’t. Filoni has previously shared that Commander Cody was supposed to return as a villain in Star Wars Rebels, but the story arc was ultimately scrapped.

The show is set to follow Obi-Wan “Old Ben” Kenobi during his self-imposed exile on Tatooine about ten years after the events of Star Wars: Episode III – Revenge of the Sith (2005). Both Ewan McGregor (Jedi Master Obi-Wan Kenobi) and Hayden Christensen (Darth Vader/Anakin Skywalker) are set to reprise their prequel trilogy roles.

Thanks to a new Reddit thread, certain fans are sure that we’ll see Cody hunting his former compatriot in the upcoming series, which recently finished filming and is set to debut on Disney+ in 2022.

Ive always wondered this. Maybe there’s something i dont know about? I dont read the novels so i don’t know if there is an answer there. I was hoping to get some kind of an answer in The Bad Batch, but clearly not. Maybe season two? I doubt it tho. If there is no set fate, what do you think happened?

What’s the fate of Commander Cody? from starwarsspeculation

A Redditor going by General_Irondaddy speculated:

He probably remained loyal to the Empire and we’ll probably see him hunting down Obi-Wan in the upcoming Kenobi show.

Going off of the fact that we already know Filoni once wanted the popular character to become an antagonist already, this certainly isn’t out of the realm of possibility.

Another social media user, tehmpus, shared their opinion about what could have happened to Cody — though this is pure speculation — but something along these lines could, theoretically, play out in Obi-Wan Kenobi:

I’m going to give an alternate ending for Cody.

This is just speculation, but Cody was one of the best commanders for the Clone Troopers. If the Empire sent a massive number of Clone troopers into harms way in order to put them in a trap that they couldn’t win, it stands to reason that Cody might be the overall Clone Commander for such a strike force.

He could have died in this scenario. Afterwards the Empire claims that the Clones are insufficient to their current needs, and disbands the surviving Clones.

Although there is no confirmation that Commander Cody will return in Obi-Wan Kenobi, rumors that Temuera Morrison — the clone trooper extraordinaire who has played Cody, Jango Fett, and Boba Fett through the years — will reprise as the popular character in the series have abounded for months.

It would make perfect sense for Morrison to be cast as Cody in this particular Star Wars series. And, frankly, Clone Wars fans deserve some closure about the final fate of one of their favorite soldiers.

A natural and practical leader in the clone army, Cody was a good fit for General Kenobi, to whom he was particularly loyal. Cody’s keen ability to strategize, combined with his fierce combat style in the heat of battle, earned him the respect of the Jedi, and of his fellow clones as well. He often worked with Captain Rex, with whom he became friends. Cody enjoyed a close relationship with Kenobi, often sharing a tension-busting joke with him during intense moments on the battlefield. When Darth Sidious gave Order 66, however, Cody’s loyalty to Kenobi was eclipsed by his clone indoctrination, and he ordered his troops to fire on the Jedi.

Do you think Commander Cody is finally returning to the Star Wars franchise in Obi-Wan Kenobi?