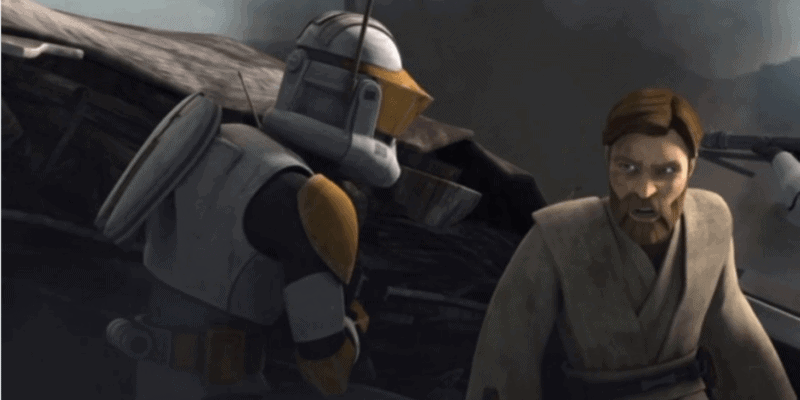 Over the years, Dave Filoni has had a hand in creating some of the Star Wars universe’s most memorable characters.

For instance, he worked with George Lucas to create Ahsoka Tano, Anakin Skywalker’s Padawan in Star Wars: The Clone Wars. Then, he helped actress Rosario Dawson bring Tano to life alongside Din Djarin (Pedro Pascal) and Grogu (AKA “Baby Yoda”) in his and Jon Favreau’s hit series, The Mandalorian.

Filoni has also been at the helm of the development of popular clone trooper characters like Captain Rex and Commander Cody.

As it turns out, the Star Wars guru actually wanted Cody (Dee Bradley Baker) — who was the clone marshal commander assigned to Jedi General Obi-Wan Kenobi in the animated series, Clone Wars — to return in another animated show, Star Wars Rebels.

The writers talked about and considered bringing Commander Cody into Rebels. Gilroy mentioned there was an idea of Thrawn realizing the rebels are working with former clones, so he would have done his research and brought someone in to assist with the problem and that could have been Cody.

CBR expounded on how Cody was supposed to return in Rebels — with a villainous turn, thanks to his inhibitor chip:

The storyline centered around Grand Admiral Thrawn figuring out that the crew of the Ghost was working with clones. Thrawn would have brought in Cody to help research and track those clones down. While it may have been an interesting – if devastating – concept to see Cody return to the franchise in a completely different light, the storyline was eventually scrapped as they felt it was too far outside the current Rebels narrative focus.

Perhaps the most intriguing thing about this scrapped Star Wars storyline is that it perfectly plays into what we’ve seen so far in Filoni’s latest series, Star Wars: The Bad Batch. Clone Force 99’s Crosshair abandons his fellow clone troopers — Hunter, Wrecker, Echo, and Tech — to become an Imperial officer after he cannot ignore the Order 66 command.

Now, with rumors running rampant that Rex is set to return in The Bad Batch and Cody — perhaps played by The Mandalorian’s Boba Fett actor, Temuera Morrison — will make his live-action debut in director Deborah Chow’s upcoming series, Obi-Wan Kenobi, it seems that Filoni’s clone troopers may not be out of the Star Wars story yet.

In fact, it’s certainly possible that we could see this forgotten Rebels plot play out in Obi-Wan Kenobi.

The show, starring prequel trilogy actors Ewan McGregor as Jedi Master Obi-Wan Kenobi and Hayden Christensen as Darth Vader/Anakin Skywalker, will be set about ten years after Star Wars: Episode III – Revenge of the Sith (2005). This opens the door for a post-Order 66 version of Commander Cody to make his debut on Tatooine.

What do you think? Should a dark Commander Cody appear in the Star Wars franchise?