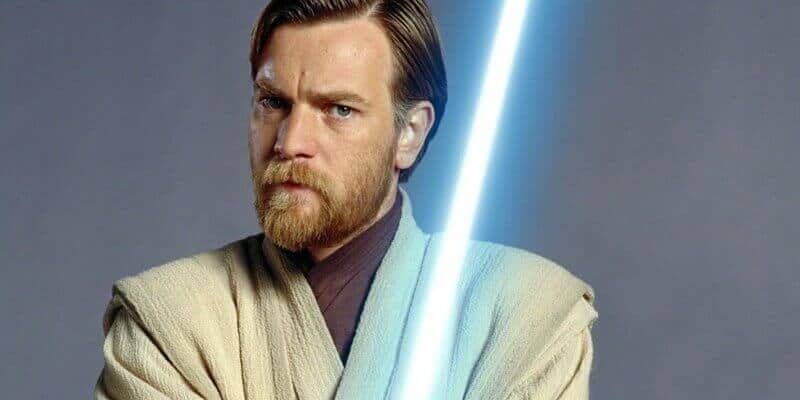 As one of the most well-known Jedi Masters in a galaxy far, far away, Obi-Wan Kenobi needs no formal introduction. However, even if you’re well-versed in the ins and outs of the Star Wars universe, you may not know everything there is to know about the iconic Jedi Knight. That’s why we created this guide.

Who is Obi-Wan Kenobi?

Obi-Wan Kenobi is an integral part of the Star Wars universe. Originally appearing in Star Wars: Episode IV – A New Hope (1977) — where Alec Guinness played the Jedi Master — Kenobi went on to be a leading character in the prequel trilogy, which began with Star Wars: Episode I – The Phantom Menace (1999) and was played by Ewan McGregor. The Jedi is set to return to the small screen in the near future, as McGregor reprises the role for his self-titled Disney+ special event series, Obi-Wan Kenobi, starring alongside fellow prequel actor and on-screen Jedi apprentice, Hayden Christensen, who is back as revolutionary villain Anakin Skywalker/Darth Vader. These events will add more to the iconic Star Wars story that saw Anakin become Vader at the end of the prequel trilogy and might even include a guest appearance from Anakin’s apprentice, Ahsoka Tano.

Who was Obi-Wan before he went into hiding?

Obi-Wan Kenobi joined the Jedi Order at a young age and before going on to becoming the Padawan of Qui-Gon Jinn (Liam Neeson), initially trained under Grand Master Yoda (Frank Oz). The Jedi played an essential role during the Trade Federation’s invasion of Naboo where he aided Queen Amidala (Natalie Portman) in her ploy to retake the planet. This led him to face Sith Lord Darth Maul (Ray Park) which saw his Master killed, making Anakin Skywalker (Jake Lloyd) his new Padawan.

A decade later, Kenobi would go on to trace Jango Fett (Temuera Morrison) — Boba Fett’s “father” — to the water planet of Kamino, where he uncovered the Clone Army of the Republic. Ending up on Geonosis, Kenobi joined the rest of the Jedi Council in the beginnings of the Clone War against Count Dooku (Christopher Lee) and his Separatist allies. In the wake of the battle on Geonosis, the Jedi Master became a general in the Army of the Republic where he faced off against General Grievous, got tied up with the space pirate Hondo Ohnaka and saw the return of Darth Maul.

During the fall of the Republic when Chancellor Palpatine (Ian McDiarmid) revealed himself to be the Sith Lord Darth Sidious and executed Order 66 – the signal that the Clone Army should betray and destroy the Jedi – Kenobi saw his greatest defeat. He discovered that Skywalker had turned to the Dark Side under Palpatine’s tutelage, leading to a devastating duel on the planet Mustafar where Skywalker was seemingly defeated, only to return years later as Darth Vader.

Who was Obi-Wan after he came out of hiding?

Kenobi returned — albeit with the alias “Ben” — when Princess Leia Organa (Carrie Fisher) attempted to recruit him for the Rebel Alliance during the Galactic Empire’s rule of the galaxy. The Jedi went on to train Luke Skywalker (Mark Hamill) before facing his old Padawan Darth Vader aboard the planet-destroying Death Star, which ultimately led to him being killed but keeping his Force spirit preserved.

How did Obi-Wan change the Star Wars universe?

Kenobi trained Luke Skywalker — arguably, the biggest hero of the Star Wars universe — leaving a lasting legacy as one of the greatest Jedi Masters of all time. He also went on to guide future Star Wars hero, Rey (Daisy Ridley) during her final encounter with Emperor Palpatine on Exegol.

Why Obi-Wan Goes By Ben

When did Obi-Wan start going by Ben?

After going into exile due to the devastating slaughter of the Jedi, Obi-Wan took up the name Ben Kenobi while living in hiding on Tatooine. In The Clone Wars, after faking his death to stop a plot to kidnap Palpatine, Obi-Wan continued the mission as Ben, suggesting that this would be his chosen future alias. In the novel “Kenobi” by John Jackson Miller — which is part of the Legends franchise and therefore not canon — Kenobi chooses to use the name Ben in his future life after falling in love with Duchess Satine Kryze — Bo-Katan’s sister — who often called him by that name.

Why is Ben Solo named after Obi-Wan?

Ben Solo AKA Kylo Ren (Adam Driver), child of Han Solo (Harrison Ford) and General Leia Organa, is revealed to be called Ben during the final act of Star Wars: Episode VII – The Force Awakens (2015). There is nothing concrete to clarify his namesake but a reference in Star Wars comics suggests Solo was called Ben after Obi-Wan Kenobi, causing the young Jedi much frustration due to him never knowing him.

The name may have come from Kenobi being a friend and ally of Bail Organa (Jimmy Smits) — Leia’s adoptive parent — or the part he played in bringing Han Solo and Princess Leia together on their inaugural Rebel mission together. It is also likely that Lucasfilm wanted to pay homage to character who played such a huge role in the beginning of the Star Wars universe, and helped Luke Skywalker find his way in the galaxy.

What else do we know about Obi-Wan’s life as Ben?

After going into exile on Tatooine, Ben was said to have lived a meagre existence, roaming the canyons and meditating. Although, in the Star Wars canon novel, “Ahsoka” by EK Johnston, Kenobi paid a visit to the grave of Shmi Skywalker to reflect on his role in Anakin’s fall to the Dark Side. We know little about the life Obi-Wan lived as Ben, but we will always remember his cloak-clad first appearance in A New Hope.

What is Obi-Wan’s relationship with Darth Vader?

Kenobi and Vader’s relationship is very much anchored on their Master/Padawan identities that were showcased in detail during The Clone Wars’ run. Kenobi regrets losing Skywalker to the Dark Side and missing Darth Sidious’s impact on the young Jedi’s life. Vader in turn sought revenge against Kenobi, believing him to have held him back from the Force for years. The culmination of this rivalry led to Kenobi letting himself be executed by Vader aboard the Death Star. This relationship is likely to be explored in the upcoming Obi-Wan Kenobi Disney+ television series which takes place about ten years after the disastrous events of Star Wars: Episode III – The Revenge of the Sith (2005).

What is Obi-Wan’s relationship with Luke Skywalker?

Kenobi first met Luke Skywalker at the end of the third film in the franchise. When Padmé Amidala gave birth to the twins Luke and Leia before dying, Kenobi vowed to keep them safe and left Leia with Bail Organa on Alderaan, and Luke with Owen (Joel Edgerton) and Beru Lars (Bonnie Piesse) on Tatooine. Luke goes hunting for “old Ben” years later after R2-D2 and C-3PO crash land on the desert planet, with the former housing a message for Obi-Wan Kenobi from Princess Leia along with the plans for the Death Star. Once they meet again, and after discovering Luke Skywalker’s Uncle Owen (Phil Brown) and Aunt Beru (Shelagh Fraser) had been killed by Imperial forces, Kenobi begins to train him in the Jedi arts as they journey across the galaxy to deliver the plans to Alderaan.

In the subsequent battle between Vader and Kenobi, the latter lets himself be killed by his old Jedi apprentice, living on as a Force spirit to guide Luke through the rest of his training to become a Jedi. This journey would take Luke to the swamp planet Dagobah where he would meet Master Yoda.

Kenobi has always seen himself as somewhat of a surrogate father to the young Luke Skywalker which was likely the reason he decided to come out of exile, join the Rebellion and train the child he rescued from his father all those years ago, becoming a hero of the Star Wars galaxy.

What is Obi-Wan’s relationship with Master Yoda?

Kenobi’s and Yoda’s relationship is one of mutual respect and a love for the Jedi arts. Kenobi would often look to Master Yoda for advice during his time as a Jedi Knight — aside from refusing to kill Anakin after his turn to the Dark Side, which Yoda suggested. The two came together after Padmé’s death to ensure their children were protected from Darth Vader.

How Obi-Wan Kenobi Became a Legend For Star Wars Fans

Why has Obi-Wan risen to such fame amongst Star Wars fans?

Obi-Wan Kenobi is for sure a fan-favorite in Star Wars fan circles. His popularity likely stems from the actors who have played him. Alec Guinness brought a disgruntled yet hopeful Kenobi to the original George Lucas film in 1977 — going onto being nominated for the Academy Award for Best Supporting Actor. Ewan McGregor reportedly studied Guinness’s portrayal of the Jedi, lending those traits to his performance as the famous character.

That being said, the character of Obi-Wan Kenobi is almost synonymous with the Star Wars franchise itself. From his faithfulness in the Force, to his dedication to bring Anakin Skywalker back from the Dark Side, to his unwavering leadership as a general in the Clone Wars, Kenobi has always been on the side of good, leading the charge as friend, ally and hero.

What are the memes that have sprung up in relation to Obi-Wan Kenobi?

One of the most classic Obi-Wan Kenobi memes springs from his entrance in Revenge of the Sith, which sees him dropping down to face his long-time foe General Grievous and saying the famous “Hello there”. There have been many takes on Kenobi’s “Hello there” line including this one from Radranger (@Rossfowler52):

This has got to be the best Obi-wan Kenobi meme I’ve seen pic.twitter.com/X576oOLfU6

Another famous Kenobi meme is the ever-circulating Jesus meme which sees the long-haired Ewan McGregor in his Kenobi robes looking like a representation of Jesus Christ. Whether done knowingly or accidentally, the Jesus meme will never not be hilarious.

How has Obi-Wan become an integral part of the Star Wars legend?

Obi-Wan Kenobi will always be cemented as a Star Wars favorite. From the iconic Jedi Master’s initial entrance in 1977 as the lone wolf of Tatooine to his rousing adventures in the prequel trilogy and the animated series The Clone Wars, the Jedi Master played an integral role in the downfall of the Galactic Empire, going on to be one of the most benevolent heroes in the galaxy.

The world will definitely be watching when the Lucasfilm Obi-Wan Kenobi series debuts sometime in 2022. With the return of a bearded Ewan McGregor, the ongoing battle between Kenobi and Vader and a new entry into the Skywalker Saga timeline following the Star Wars prequels, it is set to be the Star Wars television event of the year. The special event series from writer Joby Harold, will join the ranks of Star Wars series’, The Mandalorian, the upcoming The Book of Boba Fett and Andor — the series following Rebel spy Cassian Andor (Diego Luna), extending the timeline and expanding the universe overall.

Are you a fan of Obi-Wan Kenobi?